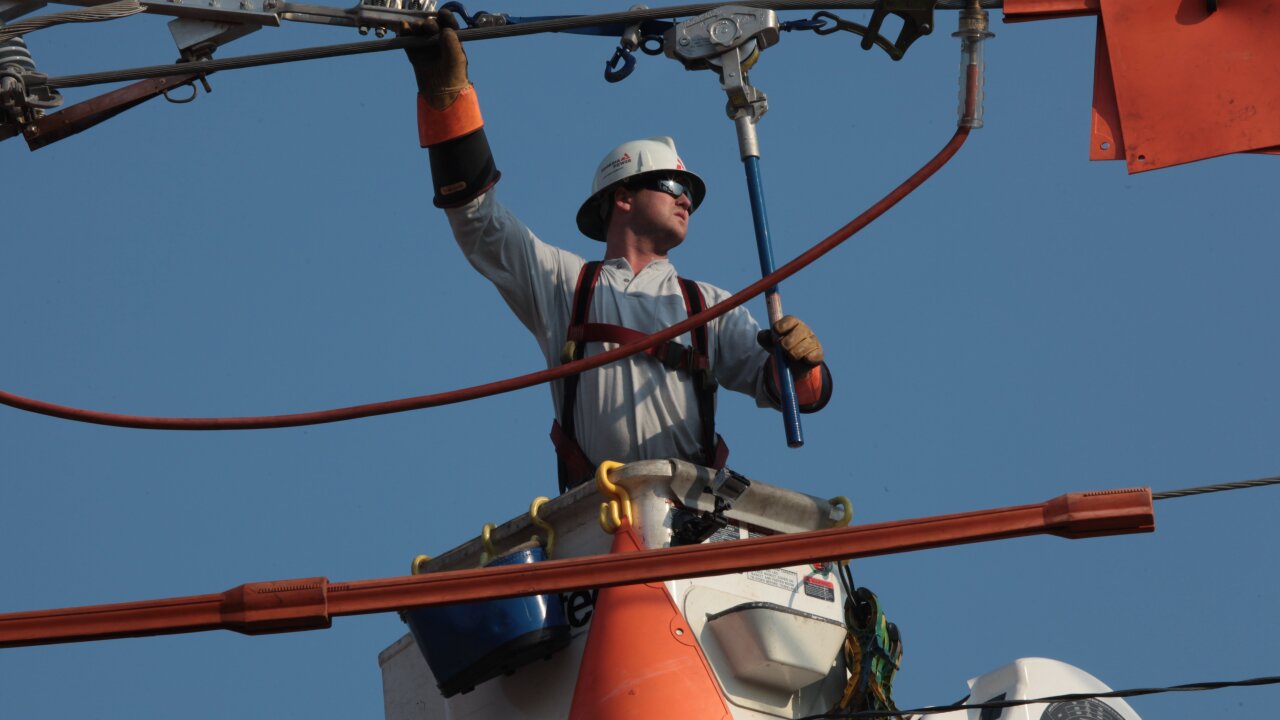 [FILE] A lineman for Georgia Power works to repair electric lines in Atlanta, Georgia on October 12, 2010.

RICHMOND, Va. -- Two former Virginia Attorneys General are teaming up to fight a Virginia law which allows the state's two power companies to freeze their rates and not be required to give customers refunds if the companies earn too much for several years.

The legislation was passed by the General Assembly in 2015 (SB 1349) and signed by Governor Terry McAuliffe.

Ken Cuccinelli and Andy Miller argue the bill is unconstitutional and unfair to Dominion and Appalachian Power customers.

They are filing a legal brief Thursday with the Virginia Supreme Court, and plan to argue that the law is unconstitutional.

"The reason we say it is unconstitutional is the state corporation commission is the one that is supposed to set electric rates under the Virginia constitution," Cuccinelli said in a Skype interview.

Cuccinelli argued that recent rate reviews by the State Corporation Commission found the power companies over-earning up to $300 million a year, which leads to customer refunds.

"That will shift maybe two billion dollars from the pockets of about three quarters of Virginia households to these two electric utilities over those seven years," Cuccinelli said.

"We think that's a false argument and a faulty premise and the reports that have been done do not take into account expenses we've incurred, like by Hurricane Matthew this fall," Dominion spokesperson David Botkins said in an interview in his office.

Botkins said the legislature passed the bill because of new clean power regulations imposed by the Obama administration.

He said the SCC found those new regulations would cost Dominion billions of dollars and lawmakers wanted to prevent dramatic rate increases for consumers, so they froze the rates.

"Rates are lower today than they were when the bill was passed and customers are benefiting," Botkins said.

He said Dominion's analysis found it’s "highly unlikely" any hypothetical refunds would need to be given out in 2022.

"The whole premise that we're over-earning is a false premise," Botkins said.

CBS 6 reporter Melissa Hipolit responded to that statement by saying "of course Dominion is going to say we're not over-earning, but the whole purpose of the SCC is to take a look to make sure consumers are being protected because you have a monopoly."

A spokesperson for Appalachian Power said they could not comment on pending litigation.

A spokesperson for Current Attorney General Mark Herring said Herring believed the bill was bad policy when it was proposed, but after it passed he found it is constitutional and, thus, he has an obligation to defend it.