Dog recovering from gunshot to face during armed home invasion 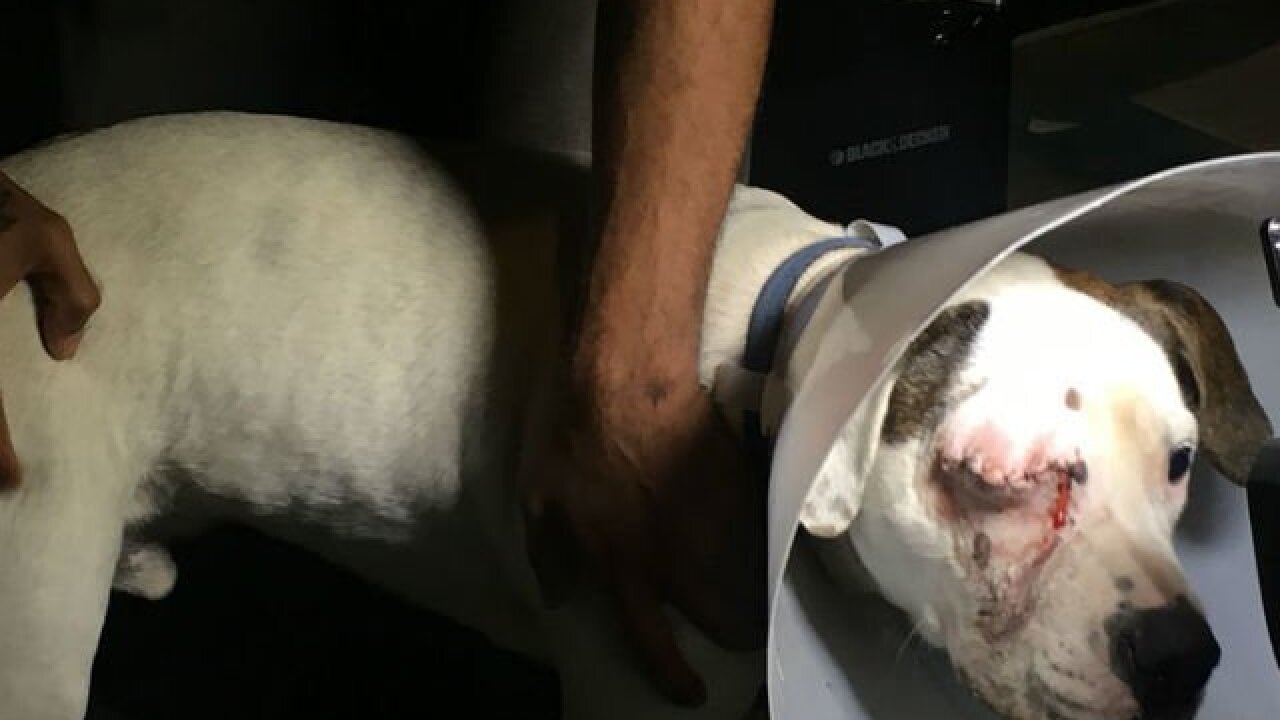 **Graphic Warning** West Palm Beach, FL Jaxon is back home recovering from an emergency life-saving surgery. The pup’s right eye stitched shut from a gunshot to the face.

LOXAHATCHEE, FL — Armed robbers shoot their way into a Florida home in the middle of the night. The people inside the home consider themselves lucky to be alive. Their dog is also living a tale of survival after being shot in the face during the home invasion, reported WPTV.

“We just got our puppy back today,” said Ireneo Santos, a victim in the armed robbery home invasion.

Jaxon is back home recovering from an emergency life-saving surgery. The pup’s right eye stitched shut from a gunshot to the face. The scar is a horrifying reminder for Santos of what happened Thursday night.

“Inside of our house we saw a guy running at us with a mask and a hood and he had a gun,” said Santos.

It was after 1 a.m. when two armed men came in through the back sliding door. Santos, his fiance, and his friend were in the bedroom with nowhere to run.

“At least three, four rounds, at first, just come flying in the door hitting the door ricocheting off of everything; we were scared,” said Santos.

Santos says the robber demanded electronics, cash, and other items. When they realized they had nothing to give him, Santos says his friend just reacted.

“Grabbed the guy, grabbed the gun and put the gun in the air with his arm and we tackled him to the ground, got the gun out of his hand and the kid started freaking out,” added Santos.

**Graphic Warning**
West Palm Beach, FL
Jaxon is back home recovering from an emergency life-saving surgery. The pup’s right eye stitched shut from a gunshot to the face.

They were able to get the gun from him. The intruders ran off and that’s when Santos called 911 and started looking for his other friend who was also in the house.

“I see a big pool of blood right there and I’m like oh man, I think they shot my friend and I realized it wasn’t him, it was my dog,” said Santos.

Jaxon was by the sliding door where he tried to fend off the robbers before he was shot. The dog was bleeding from his face and crying.

“It was really hard to see,” said Santos.

A GoFundMe page was created to pay for Jaxon’s emergency surgery. Thanks to an anonymous donor, Jaxon is still alive.

Palm Beach County Sheriff’s detectives have a person of interest, but no arrests have been made. Detectives recommend if you ever find yourself a victim in a situation like this, get out of the home and call 911. If you can, get a good description of the intruder(s). Detectives do not recommend fighting an armed person.