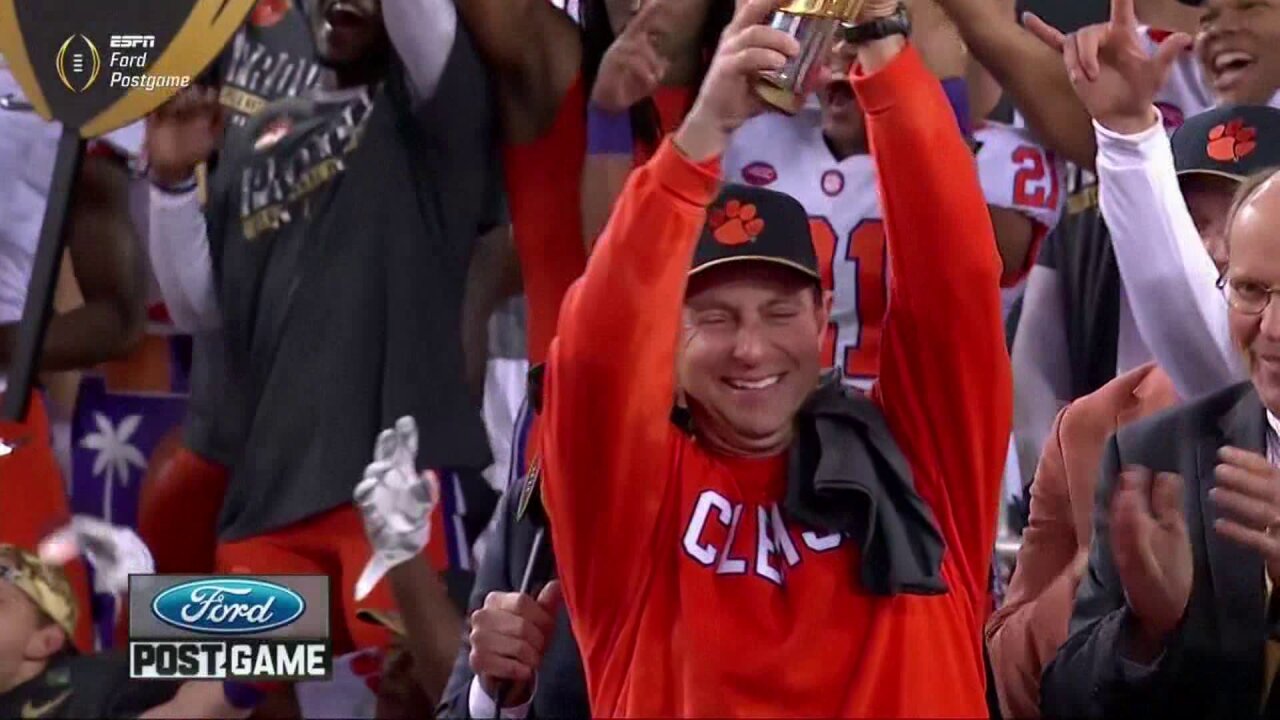 In the end, the sequel was better than the original.

And this time, it was a happy ending for Clemson.

With one second remaining, Watson found sophomore wide receiver Hunter Renfrow for the game-winning score, a 2-yard touchdown pass. It capped a fourth quarter in which the Tigers scored 21 points.

“I knew before I even snapped the ball it was going to be a touchdown,” Watson said. “All I had to do was just get the ball to him. I slowed down the moment, everyone made their blocks and did their part, and I did my part, and we pulled it out.”

It’s Clemson’s first national title since the 1981 season and the first time it has beaten a top-ranked team.

“I don’t know if I’m going to be able to stomach watching that one any time soon,” Clemson head coach Dabo Swinney said. “That has to be one of the greatest games of all time, just absolutely incredible, to have to take the field and go down the field to win the game, that’s what it’s made of. That’s what I told them when it was over. This is what it’s all about right here, boys.”

In last year’s title game, which Alabama won 45-40, Watson gave the Crimson Tide trouble, completing 30 of 47 passes for 405 yards and four touchdowns while rushing for 73 yards.

On Monday night, the Clemson junior quarterback got off to a slow start but heated up as the game went along, finishing with 36-of-56 passing for 420 yards and three touchdowns and had 43 yards rushing with one score. He was named the game’s MVP.

Following the win, Watson confirmed this was his final game playing for Clemson (14-1) and that he would enter the upcoming NFL draft.

“It was a tough decision,” Watson, who graduated in December, said. “You know, Clemson is a special place. I’ve enjoyed every single moment since I came in, in January of 2014. Three years kind of flew by. But I think it’s my time to go, just kind of end it with a bang, and I felt like Coach Swinney knew my time was up.

“I’ve enjoyed, like I said, the three years, and I just wanted to sign my name and end it with an exclamation point, and I think I did that. Moments like this I’ll never forget. Clemson was the best three years of my life, and credit me as the person I am today. Through my faith, as a citizen, as a football player, as a student, I’ve learned so much, and it’s just been special.”

It’s also special for Swinney, winning his first title as a head coach. A walk-on wide receiver at Alabama, Swinney was on the 1992 Crimson Tide team that won the national title. He joins Bud Wilkinson as the only person to play on and serve as head coach of a team that won an Associated Press national championship.

“I can’t tell you how humbled I am, blessed and so thankful to be a part of helping get Clemson back on top, this moment, 35 years, and doing something that a lot of people didn’t think we could do,” Swinney said. “I’m just so thankful for that opportunity, and I’m excited about continuing to help Clemson be the best.”

“I don’t think one game defines who you are, you know, as a person, as a competitor, or as a team and certainly not define what this group of young men was able to accomplish this year,” Alabama head coach Nick Saban said. “It was a hard-fought game out there today, very disappointing to lose a game like that, and I wish there was something else that I could do for the players to help them be more successful in the game.”

The loss kept Saban from winning a sixth title, which would have tied him with another Alabama legend: Bear Bryant.

It didn’t start well for the Tigers.

Alabama sophomore running back Bo Scarbrough, who rushed for 180 yards and two touchdowns in the Peach Bowl semifinal, continued his dominance in Tampa before leaving with an injury, running for 93 yards and two first-half touchdowns. That gave the Crimson Tide at 14-0 lead.

A 24-yard pass from Watson to Renfrow cut the score to 17-14 with 7:10 left in the third quarter. But later in the period Jalen Hurts, who had been quiet for much of this game, stepped up. The freshman quarterback connected with senior tight end O.J. Howard for a 68-yard touchdown to give Alabama a 24-14 lead.

Then came a frentic fourth quarter. With 4:38 remaining, Clemson regained the lead at 28-24 with a 1-yard touchdown run from junior running back Wayne Gallman. Hurts counterpunched, scoring on a 30-yard run to make it 31-28 with 2:07 left and giving him 63 rushing yards on the night.

“I just smiled right when they scored,” Watson said. “I had seen the two minutes and one second on the clock, and I just smiled and I just knew, I just told my guys, ‘Hey, let’s be legendary, let’s go be great.’ I told myself they left too much time on the clock. Last year they ran out the time, but this time they left us a little bit too much.”

Alabama entered the night leading the country in total defense, rushing defense, scoring defense and defensive touchdowns. But it didn’t look like it in the final quarter. Thanks in huge part to Watson, Clemson finished with 511 total yards of offense.

“I knew he was going to come back strong in the second half,” Alabama senior defensive lineman Jonathan Allen said of Watson. “They made the adjustments they needed to and we didn’t.”