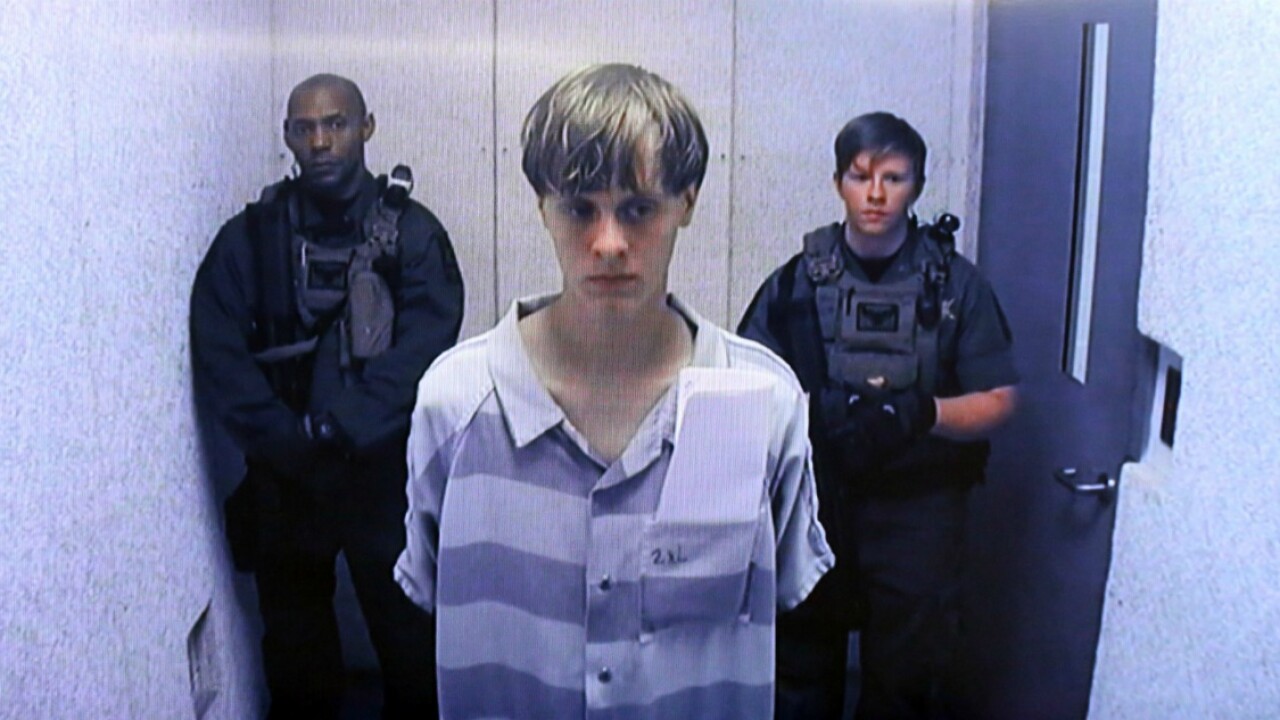 In this image from the video uplink from the detention center to the courtroom, Dylann Roof appears at Centralized Bond Hearing Court June 19, 2015 in North Charleston, South Carolina. Roof is charged with nine counts of murder and firearms charges in the shooting deaths at Emanuel African Methodist Episcopal Church in Charleston, South Carolina on June 17. (Photo by Grace Beahm-Pool/Getty Images)

CHARLESTON, South Carolina  — Twelve federal jurors said Tuesday that Dylann Roof, the man who killed nine people in a 2015 massacre at a historically black Charleston, South Carolina, church, should be put to death.

The 10 women and two men recommended the death penalty for all 18 counts that carried that as a possible sentence.

Before the jury deliberated his fate for three hours, Roof told the jury he still feels he had no choice.

But he also suggested he’d like to be spared.

“From what I’ve been told, I have a right to ask you to give me a life sentence, but I’m not sure what good that will do anyway,” Roof said. “But what I will say is only one of you has to disagree with the other jurors.”

His statement followed a prosecutor’s impassioned, two-hour argument in a Charleston courtroom urging jurors to give Roof the death penalty instead of their other option, life in prison without possibility of parole.

The prosecution and defense rested in the penalty phase on Monday, bringing to a close days of heartbreaking testimony from family and friends of victims who were killed.

Prosecutors argue that he’s a calculating killer who deserves the death penalty because of his motive, his lack of remorse and the shooting’s impact on the victims’ families.

In his closing argument Tuesday morning, Assistant US Attorney Jay Richardson described the lives of all nine victims, cited Roof’s “racist hatred” and reminded the jurors of the testimony and evidence that convicted him:

• Roof was at the church three previous times to scout his target.

• He sat with the group for 40 minutes before shooting.

• He pulled the trigger “more than 75 times … reloading seven times” as he stood over his victims, shooting them repeatedly.

• He “showed not one ounce of remorse.”

• Richardson referred to what Roof had told investigators in a recorded interview: That “somebody had to do it,” in part because “black people are killing white people every day.”

“Those are the words of an extraordinary racist who believed it was justified,” Richardson said.

Earlier in the penalty phase, prosecutors presented evidence that included chilling writings from a jailhouse journal Roof wrote after the attack.

“I would like to make it crystal clear. I do not regret what I did,” Roof wrote in the journal. “I am not sorry. I have not shed a tear for the innocent people I killed.”

Friends and relatives of victims slain in the shooting gave emotional testimony in court before Tuesday, some of them sobbing on the stand.

As they made their case, prosecutors played haunting recordings of the victims preaching, praying and singing.

Roof, 22, has been representing himself in court since this phase of the trial began.

He did not question witnesses, but filed several motions objecting that their testimony had been too emotional.

In his brief opening statement last week, he told jurors that he doesn’t have mental health problems.

If jurors in this trial decide to spare Roof’s life, he could still face a death sentence. He’s also set to be tried on state murder charges, and prosecutors have said they’ll also seek the death penalty in that case.

Serial killer Gary Lee Sampson was the last person to get a federal death sentence. He’s one of 63 federal prisoners, including Boston Marathon bomber Dzhokhar Tsarnaev, awaiting execution, according to the Death Penalty Information Center, a Washington-based nonprofit.

Only three federal inmates have been executed in the United States since the federal death penalty was reinstated in 1988 after a 16-year moratorium:

• Juan Raul Garza on June 19, 2001, eight years after he was convicted of running a marijuana drug ring and killing three people.