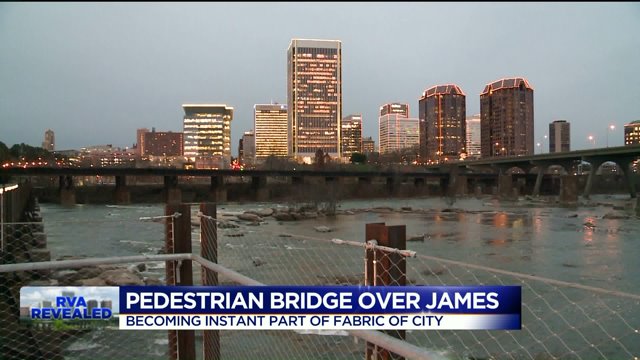 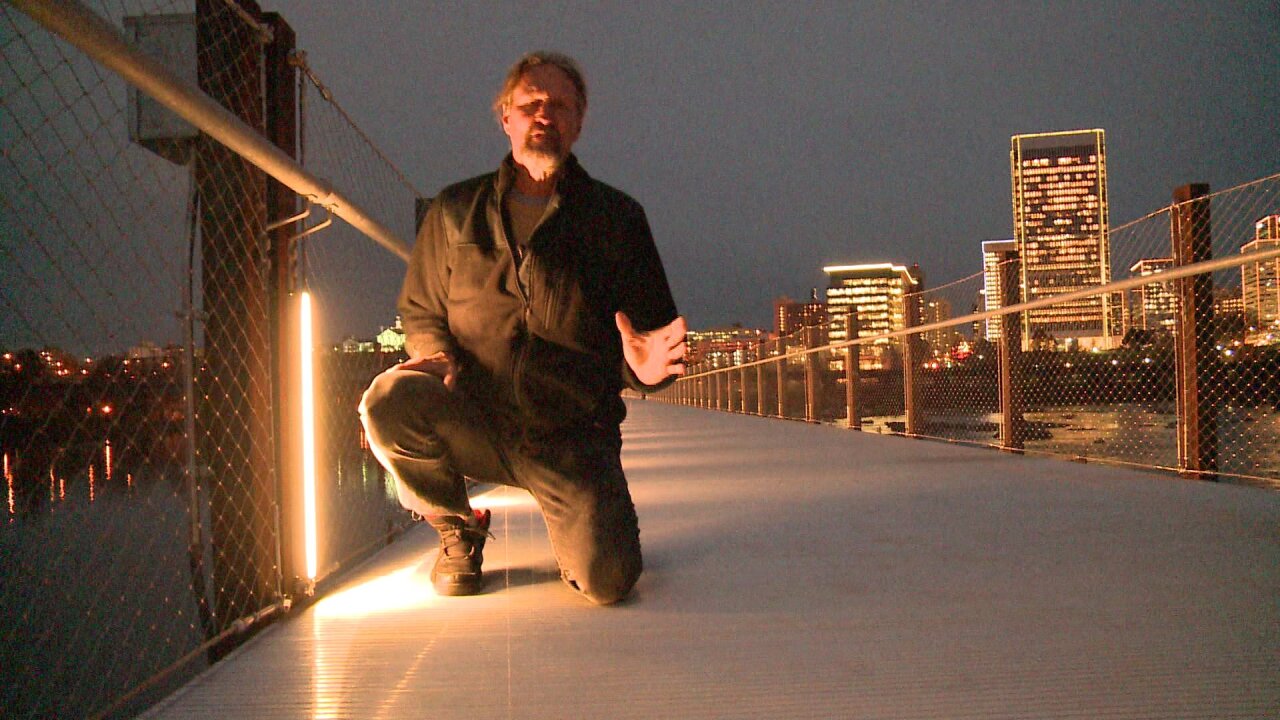 RICHMOND, Va. -- For me, it's about 635 steps of pure pleasure; a smooth, level, polished-metal walk practically through the belly of our mighty James River.

After years of anticipation and 15 months of construction, the Tyler Potterfield Memorial Bridge, aka the "Dam Walk," is open and is already attracting hordes of strollers, runners, dog-walkers, bird-watchers, river-lovers, cyclists, skateboarders and folks delighted that long-disrespected but now-booming South Richmond is truly connected to downtown.

We took the full walk Wednesday and met lots of cool people, all pretty much thrilled by it. (See our video report).

The project was a tough process, requiring lots of tricky diving hours - two divers were all but swept away - along with  interruptions for high water, spawning fish, even the drowning of a homeless woman in the dangerous and popular hydraulics formed by the river surging over what's left of the 116 year-old levee walls that helped fuel the turbines that drove the first street car system in the United States.

Turning it into a walkway was the dream of senior Richmond planner and historian Tyler Potterfield, who died young of a heart attack two years ago.

And now there's this sweet, nature-filled connector to the Riverwalk, the Buttermilk, North Bank and Capital Trails along with some of the city's prime party spots.

A word of caution: the smooth metal surface will likely be slippery when wet and the sound of the river could mask the sound of approaching cyclists.

But man, what a thing this is! You can access the north end from Brown's Island. The south end, near the climbing wall and sort of below Legends Brewery, is bit more complicated.

Here's a column I wrote about the bridge 11 months ago, in late January:

A wetsuit-clad dam diver in the mighty (and mighty chilly) James River bobbed in and out of sight like a busy otter Thursday as he and his crew worked to freshen up the 115-year-old concrete piers that will soon make Richmond history.

There are 29 of these beautiful old levee piers sitting on bedrock beneath the surface of the James just below and a little upstream from the Manchester Bridge. Inside their crumbly surfaces they are rock solid. They just need some face-lifts.

"It's dangerous," the diver, Mike Scorpa of Maryland, said the next day - Friday - right after two divers were briefly swept away and were sent to the hospital to get checked out, just as a precaution.

The old piers, too, seem to be in fine shape after their much-longer relationship with the river.

"Nothing has moved," Scorpa said.

You can tell this by going up top and sighting down the rust-brown rails - straight as a laser.

Late this year, your feet and bicycles will love this perfect flatness as the first-ever pedestrian bridge spans the north and south banks of our wonderfully wild river. (Remember the Belle Isle footbridge stops at the island.) "It will be the best walkway ever," says Ralph White, our retired James River naturalist.

He believes no other city in the land has such a span - "so close to water!" - over a world-class wilderness river filled with all the wonders of nature, he said.

And man, the history!

"It's fascinating," says amateur historian Kathryn Whittington, who has helped with the wording of the span's upcoming historical plaques.

The north bank, where the man-made Brown's Island sits, was an industrial hub from 1789 to about 1970. The canal that created the island was dug to power a series of flour mills.

Later, in 1900, the Haxall Canal waters drove Richmond's hydroelectric plant, one of the early ones in the country that kept on providing power for our river city until 1968.

Our future historic walkway and the levee underneath was built in 1901 to divert water into the canal during low-water spells. Those rails up top carried cranes that lowered diverters between those good ol' piers. (A rusty crane and one of the diverters sit on the north end of the span on Brown's Island as a historical display.) Brown's Island, now one of our cool, riverside parks, was covered with old mill buildings until they were torn down in 1978, Whittington said.

The south side of the span was a key railroad hub, including a tunnel.

That area also has become an urban playground, with its great climbing wall and links to the James River Park and floodwall walk.

Now our parks and playgrounds will all be tied together.

It's an epic thing, promoted tirelessly by much-loved city planner Tyler Potterfield, who died of a heart attack in 2014 at the age of 55. (The bridge will be named after him.) Richmond Mayor Dwight Jones talked about the walkway Thursday night during his final State of the City address.

It's just one of the many cool things the city has reached for in recent years, the mayor pointed out.

It has been an absolutely amazing revival in housing, business and confidence in RVA during the past decade that has put it on many national best-places lists.

But after the speech, City Councilwoman Reva Trammell complained to me that most of the mayor's highlighted success stories were on the north side of the James.

True enough. That's kind of the way it has always been.

But we all know how much that has changed. So many of those old factories and warehouses are now condos, apartments and galleries. There are sprawling office complexes, cool restaurants and pubs wrapped up in a really sweet, distinctive, red-brick vibe. The prevailing wind keeps the taste of the James on your tongue.

The hipness that the Manchester District brought to South Side continues to spread.

At the risk of placing too much symbolic weight on this 1,600-foot span, I see it as finally connecting the two Richmonds together.

We will be able to walk or ride our bikes to each other's neighborhoods, above our wonderfully wild river, greeting each other along the way.

We can party across the James and back again.

We can go on healthy and traffic-free walks and rides to parks north and south.

"Two cultures together," the ever-enthusiastic White said. "Encouraging urban lifestyles - get out of your car - you can walk there. What a revolution!"

And that, friends, is how these tough ol' concrete piers will make history and help power RVA - again.