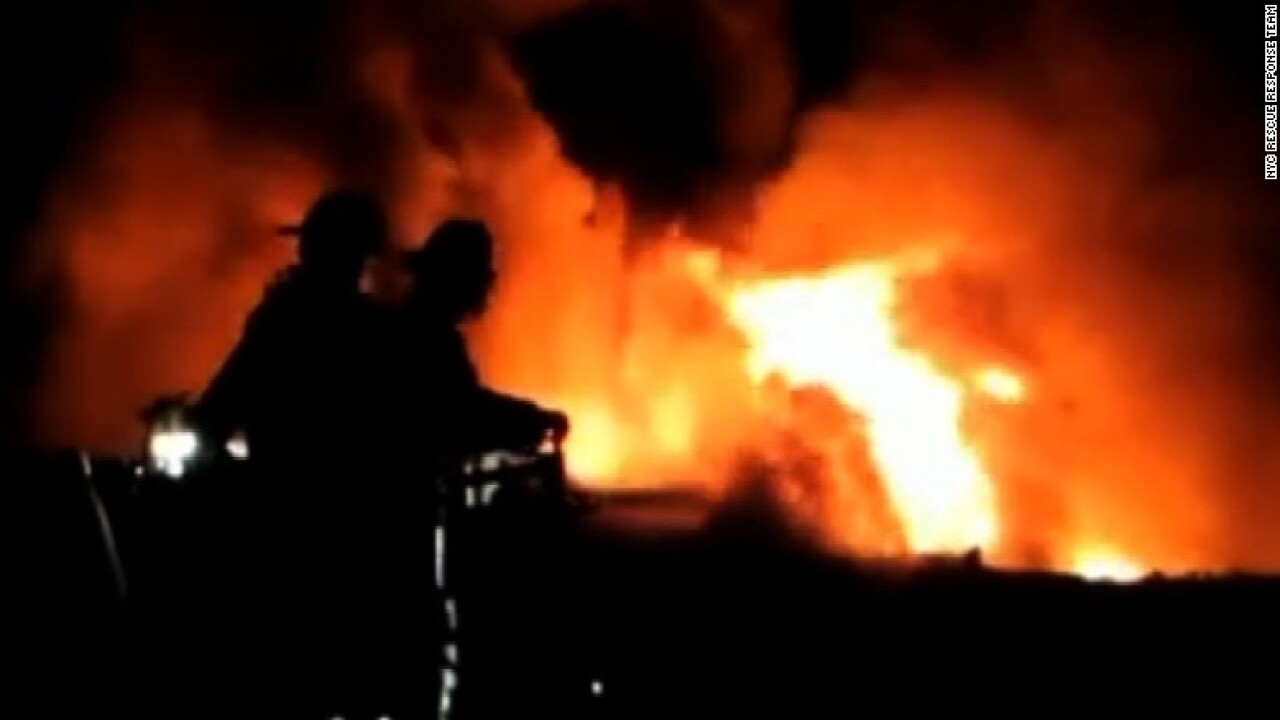 NEW YORK — In this season of giving thanks, 81-year-old Jim Duffy certainly has a lot to be grateful for.

Last month, an early morning fire broke out at his apartment building on East 93rd Street in New York City, forcing members of the FDNY to employ a risky and rarely used rescue technique to save Duffy’s life.

More than 200 firefighters responded within minutes to the six-alarm fire that overtook the five-story building where Duffy lived. Even the responding firefighters couldn’t believe the enormity of what they were battling.

Jimmy Lee climbed down a rope from the roof of the building.

Soon the order came over the scanner — everyone needed to evacuate the building because of the risk the fire posed to the firefighters’ lives.

That’s when a few of the firefighters heard the calls for help. Duffy was trapped in his apartment. With the fire beginning to overtake his home, firefighters had just seconds to think about how to save him.

“If we had gotten a 35-foot ladder to the rear (of the building), it wouldn’t have reached him because he was on the fifth floor. There were no firetrucks back there, so that’s not going to work. My thought was possibly a fire escape, but there was no fire escape in this old building. We were in a tough spot,” said firefighter Frank Rush.

So the firefighters relied on what they called “a last ditch effort” — a rope rescue. The technique requires a firefighter to use a rope to rappel down to a victim. While it’s often practiced, it’s a technique rarely used by firefighters because of the danger it poses. The last time the FDNY relied on a rope rescue was in 2011. In this fire, it was the only option to save Duffy.

A daring rescue, just in time

Firefighter Jimmy Lee would be the one who scaled the burning building.

“Frank called me and said we had a guy at the window. I just grabbed the rope, dumped the rope onto the roof and then that’s when Andy, Steve and Joe came up and we just went to work,” Lee recalled.

From the ground, firefighter Rush helped verbally guide Lee, who was strapped in a harness, down the building and toward the victim. Firefighter Hawkins helped lower Lee from the roof, while firefighter Joe Moore acted as a spotter from above. Four other firefighters — Stephen Janicki, Walter Gilroy, William McGarry, and Peter McMahon — were charged with securing the rope and their fellow members.

Eight men, who had never worked together before, were quickly united to save the trapped man.

“Your training really just kicks in at that point,” added Janicki.

Eventually Lee reached Duffy. He was hanging out of his window, trying to escape the extreme heat and thick smoke. Duffy was also weakened by part of the ceiling falling on his back.

“I remember he had his hood up. He had like a heavy jacket on. I think he put it on because he was getting burned. And I just remember sort of seeing him looking up at me with that hood and I just said to him, ‘let’s go,'” Lee said.

Because of Duffy’s position in the window, Lee picked him up and cradled him like a baby. Lee credits Duffy for remaining calm, as the two men started to descend the face of the building.

They might have been smiling, but the other firefighters were tense: the rope holding the two men had started to burn.

“I thought things couldn’t get any worse, then this happens, and I was just more or less praying that they would make it down to the ground before anything horrible happened,” said Moore.

The two eventually landed safely, with just seconds before the rope turned to ash and snapped.

The men rushed Duffy to an ambulance.

“We brought Mr. Duffy out to the street for EMS. And then, once he was handed off, we went right back to work for hours,” Rush recalled.

After Duffy was safely on his way to the hospital, the men had an opportunity to reflect on the incredible rescue they just pulled off.

“Looking back up and seeing the fire out the windows, the roof was on fire, the reality set in that wow, we saved a man’s life,” Lee said. “Legitimately, a group of guys worked together in seamless fashion and saved this guy’s life.”

That feeling set in again weeks later, when five of the eight firefighters reunited with Duffy at a rehabilitation center. The men described the reunion as a unique and rewarding experience because they don’t often get to meet the people they help.

Duffy told Lee, “It was a miracle. Or as I called it, miracle on 93rd Street.”

Each firefighter explained to Duffy the role they played in his rescue. Duffy jokingly compared the experience to a rollercoaster ride, but one that he never wanted to take again.

“One time is enough,” Duffy said. “If Jim wasn’t there at that moment, I would say I had about 10 seconds left. If he didn’t show up on time — the smoke and the heat. It felt like a flamethrower on my back — I would have been gone. You guys are the greatest.”

Duffy suffered lacerations to his hands from the window glass breaking and burns to his back. He will remain in the rehabilitation center for several more weeks. But once he’s released, he will not be able to return home. His apartment, where he lived for more than 50 years, is gone.

The fire also claimed the life of one person and left more than a dozen others injured.

“I’m sure if you ask any guy that was at that fire, they would wish they could have saved that person too. But, (the rescue) was definitely a positive ending to a kind of bittersweet situation,” said Moore.

Fire officials tell CNN the fire was caused by an overloaded electrical cord, and the building will have to be torn down.

As for Duffy, the firefighters are going even more beyond the call by setting up a fund for him so he will have a place to call home once his rehabilitation is complete.

“At the end of the day, the only thing that matters is Mr. Duffy is alive and we as a team made that happen,” said Lee.