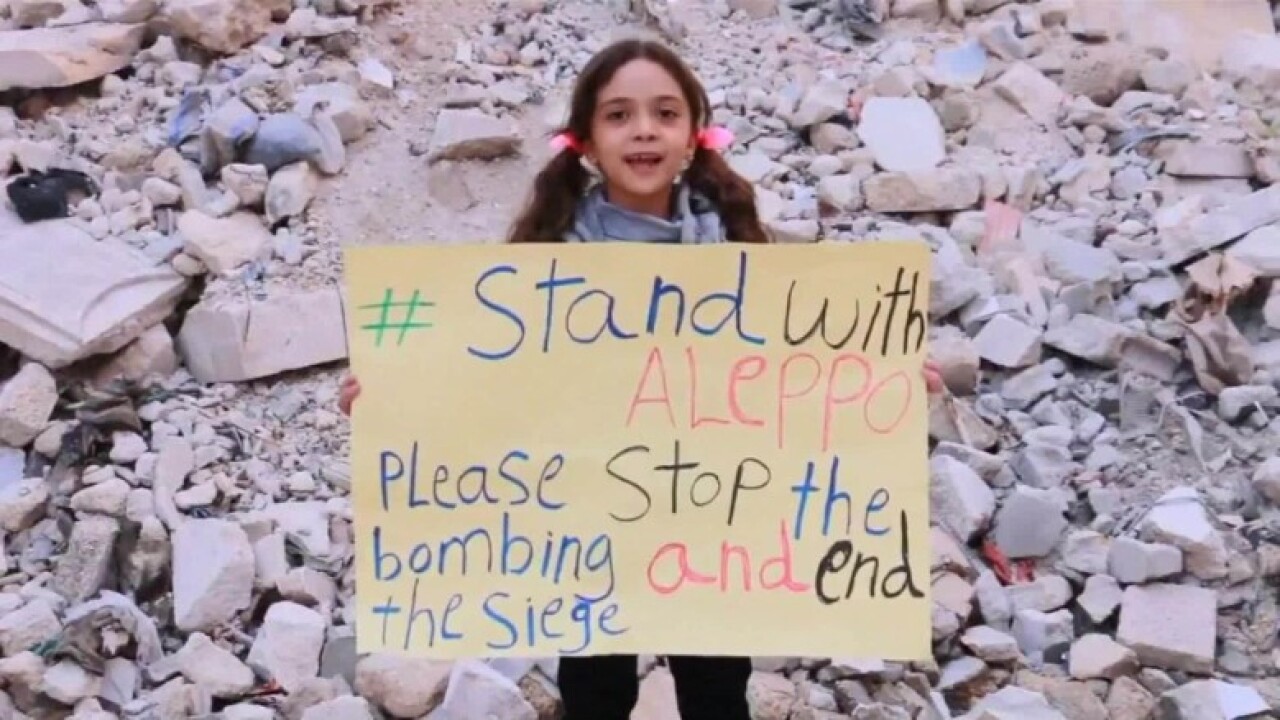 Bana, a young Syrian girl with nearly 100,000 followers on Twitter, says she likes to read, “to forget the war.” She regularly posts videos that capture the sound of bombing, appealing for help as the Syrian regime steps up its assault on the besieged city.

More than 300 people have been killed in Aleppo’s eastern districts since the regime resumed heavy bombardment last week, in what rescuers have called the most intense bombing since the war began.

Bana’s mother Fatemah, 26, created a Twitter account for her daughter in late September, as the Syrian army launched a major ground offensive to recapture Aleppo. Fatemah told CNN she started tweeting because she wanted to “share our life here to the world.”

Hello my friend @jk_rowling, I started reading your books now, my heart is for you. Thank you. – Bana #Aleppo #StandWithAleppo pic.twitter.com/MHtOIFzwuI

Fatemah teaches her children — Mohamed, 5, Noor, 3, and Bana — at home. She said that the civil war, which began over five years ago, has dramatically impacted their education.

A photograph shared to her Twitter account on Thursday shows Mohamed and Noor crowded around Bana like two bookends while she read Harry Potter and the Sorcerer’s Stone.

“My brothers want to read the Harry Potters too,” Bana said in a tweet.

My brothers want to read the Harry Potters too. – Bana #Aleppo pic.twitter.com/ZW6AGggOZj

Earlier this week Fatemah tweeted to J.K. Rowling, saying that her family had watched the Harry Potter film, and that Bana was hoping to read the book.

Hi @jk_rowling I watched Harry Potter movie, Bana would like to read the book.- Fatemah #Aleppo

Bana, this made me so happy! Lots of love to you and your brothers! #StandWithAleppo https://t.co/ODTivIs5EZ

Soon after Fatemah asked how the family could get a copy of the book, a member of Rowling’s team reached out on Twitter to ask if they would be able to read an eBook.

Two days later, Bana tweeted a photo of herself smiling and holding a sign, which read: “Thank you my friend JK Rowling for the books.”

My friend @jk_rowling how are you? Thank you for the book, love you from #Aleppo. – Bana pic.twitter.com/c84b4Zux0G

“Love you too, Bana! Thinking of you, keep safe #Aleppo,” Rowling replied.

Fatemah told CNN that they are reading the first book in the Harry Potter series “little by little,” in between the bombardment.

“It’s too early to choose a favorite character,” Fatemah added. “Especially today, many bombs distracted her.”