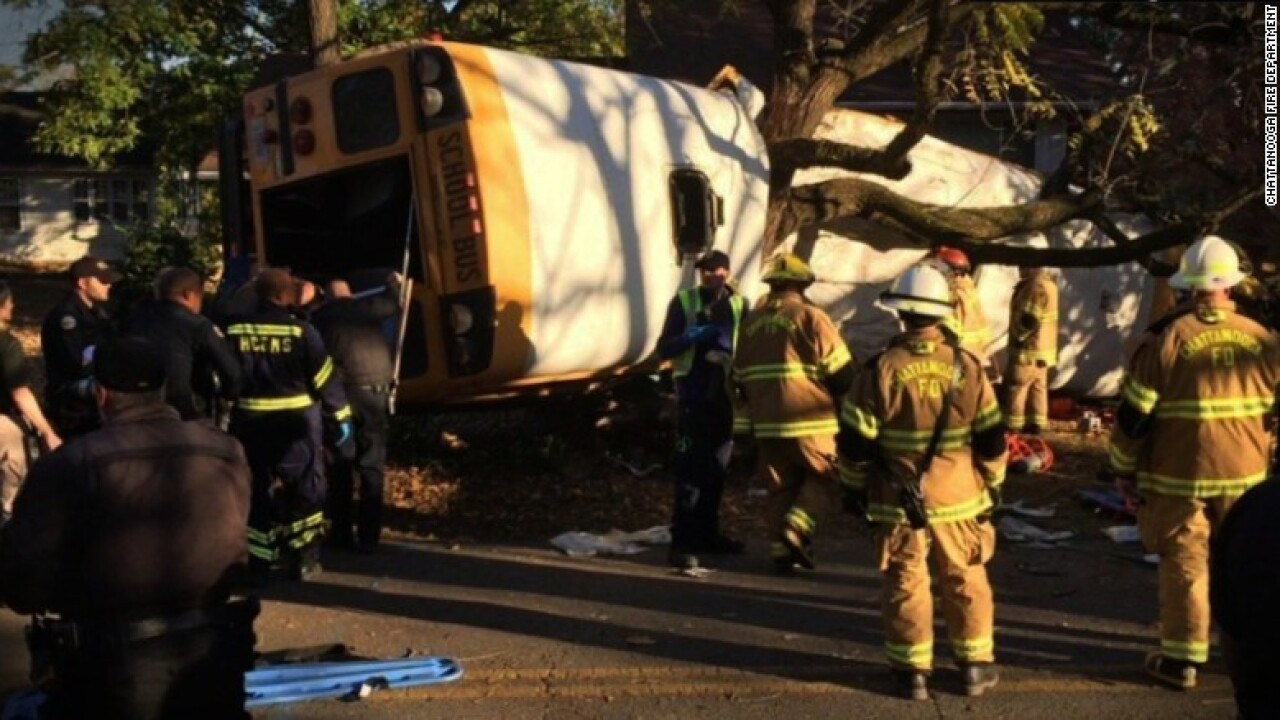 Parents in Chattanooga, Tennessee, are mourning the deaths of at least five children whose lives were cut short when their school bus smashed into a tree and split apart on Monday.

The 24-year-old driver, who police said has been cooperative and talking to investigators, has been arrested and charged with vehicular homicide.

As the investigation continues, many people across the country are left with questions — such as, could lives have been saved if the school bus were equipped with seat belts?

The American Academy of Pediatrics has long recommended that passenger seat belts be installed on newly manufactured school buses.

The National Safety Council also has made similar recommendations, said Deborah Hersman, its president and CEO, on CNN’s “New Day” on Tuesday morning.

“That’s the best protection that we can give our kids. It’s what they’re used to in cars,” Hersman said. “We know that there are very few fatalities involving children on school buses every year — they are a safe form of transportation — but anything that we can do to make them safer is really our responsibility.”

Some experts say that buses are already considered to be safe and that adding seat belts can be costly.

Although nearly 500 children and teens die each year in car accidents during school travel hours, only about four are killed while riding school buses during those same hours, according to a 2014 report from the National Highway Traffic Safety Administration (PDF).

The average incremental cost of equipping a large school bus with seat belts would be between $7,346 and $10,296, the National Highway Traffic Safety Administration estimated at a public meeting last year (PDF).

“A lot of it has to do with the communities that are responsible for replacing or buying those school buses,” Hersman said. “I do think that you have to the follow the money. We’re talking about a couple thousand dollars for each new bus that’s purchased.”

Yet the NHTSA argues that the addition of three-point seat belts could help make school buses even safer, reducing the average number of lives lost annually in school bus crashes from four to two.

In 2011, the Department of Transportation decided not to pursue a proposed rule requiring the installation of three-point seat belts on school buses nationwide, said Richard Williams, former director of the regulatory studies program at the Mercatus Center at George Mason University.

“Installing seat belts on buses is not free, and requiring their installation might mean reducing funding on other critical safety aspects, such as crossing guards for those children who do walk to school,” Williams said.

“But this is a decision each community must make for their own children,” he said. “There are very, very few deaths of children from school bus accidents, and there may be other expenditures that will be better investments to reduce risk.”

In 2014, a school bus in Anaheim, California, slammed into a light pole and trees, splitting open on its left side, while carrying students home from El Rancho Charter Middle School — strikingly similar to the this week’s crash in Chattanooga.

In both incidents, the drivers were 24 years old, conditions were clear and dry, and the buses turned over on their sides.

However, the bus in the California crash was equipped with seat belts, and no one died.

The proper use of seat belts by student passengers in that crash reduced the severity of their injuries, the National Transportation Safety Board noted in its highway accident brief report (PDF).

But now, in the wake of the Chattanooga tragedy, Williams calls for a conversation that’s much broader than the seat belt debate.

“School bus safety is critically important, and that is why we must study all possible avenues for making buses safer rather than limiting the conversation to seat belts,” Williams said. “It’s also important to focus on safe driving and ensuring that all drivers, particularly school bus drivers, are properly screened and trained.”