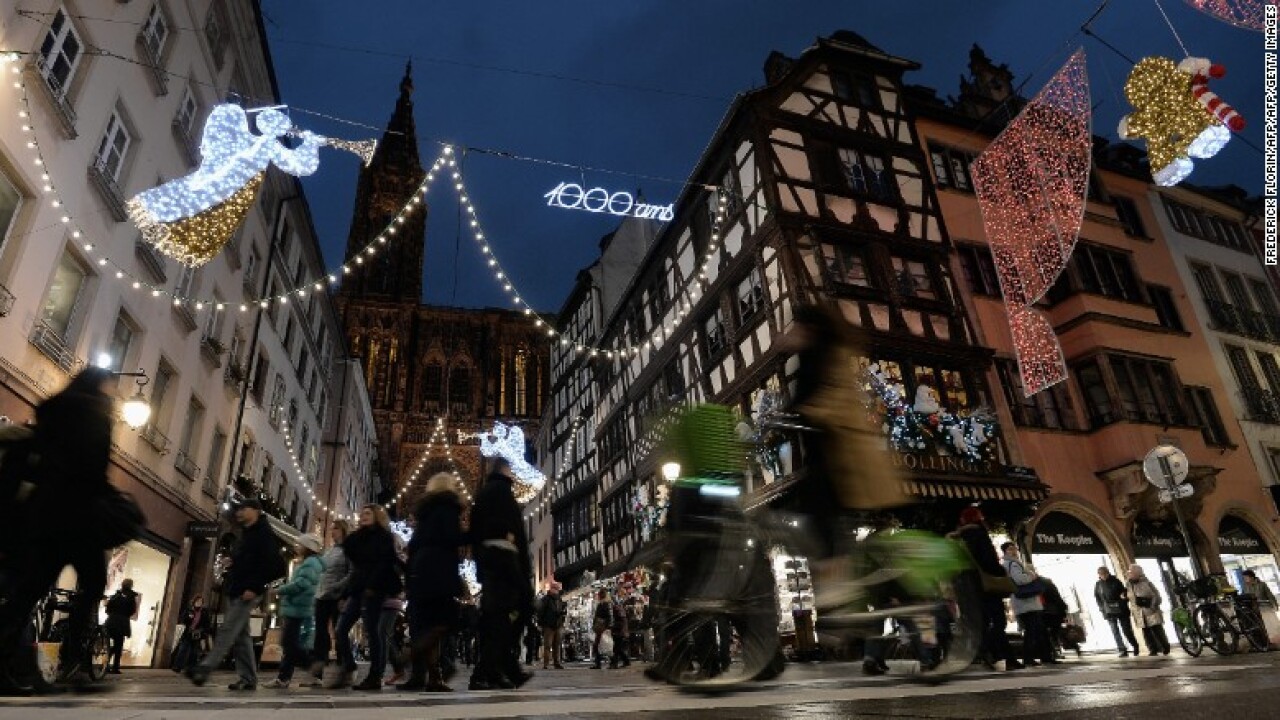 The Christmas market in Strasbourg is one of the largest and oldest in France.

The Christmas market in Strasbourg is one of the largest and oldest in France.

The US State Department issued a travel alert Monday urging US nationals to exercise caution at holiday festivals, events and outdoor markets in Europe in the coming weeks, a day after French security services thwarted an ISIS-linked plot.

The eight-month-long investigation foiled a “new terrorist attack that had been planned for a long time on our soil,” Cazeneuve said during a news conference in Paris.

Strasbourg is home to one of the most famous Christmas markets in Europe, with 2 million people expected to visit after it opens Friday. French media reported the market was a potential target of the cell.

In 2000, the Strasbourg Christmas market was the target of a thwarted plot by al Qaeda-linked terrorists.

US State Department officials told CNN the new alert was not triggered by any one specific threat, but the timing may not be a coincidence.

“Credible information indicates the Islamic State of Iraq and the Levant (ISIL or Da’esh), al Qaeda, and their affiliates continue to plan terrorist attacks in Europe, with a focus on the upcoming holiday season and associated events. US citizens should also be alert to the possibility that extremist sympathizers or self-radicalized extremists may conduct attacks during this period with little or no warning. Terrorists may employ a wide variety of tactics, using both conventional and nonconventional weapons and targeting both official and private interests,” stated the alert, which expires on February 20, 2017.

Investigators said they believe the people behind the plot thwarted over the weekend in France were being directed by a terrorist operative inside Syria linked to ISIS, a source close to the investigation told CNN. The source told CNN authorities are investigating whether any of the individuals arrested over the weekend in Marseilles and Strasbourg traveled to Syria.

They suspect some of those under arrest traveled to Syria via Cyprus, but have not yet definitively established this. A second source, a senior French counterterrorism official, told CNN that in the past few days a threat by individuals suspected of links to ISIS in Syria had been thwarted.

The suspects arrested in Marseilles and Strasbourg are between 29 and 37 years old and are of French, Moroccan and Afghan nationality. Only the Moroccan suspect was known to investigators, after they received intelligence from a “neighboring country.”

In June, two people linked to this case were arrested as part of the operation.

“Never has the terrorist threat been so high in our country. The anti-terrorist services are completely mobilized,” French Interior Minister Cazeneuve said. The case has been handed over to the Public Prosecutor of Paris.

The arrests come at a time of continued heightened concern over the terrorist threat to France. In September, French Prime Minister Manuel Valls said the threat was at its maximum level and security services were foiling attacks “every single day.”

The senior French counterterrorism official told CNN that while intensified counterterrorism operations had disrupted the plotting activity of terror networks since the Brussels attacks in March, there was still an acute danger of attacks by radicals on French soil directed, instigated, or inspired to attack, by ISIS. The official said French security services were being surprised time and again by new cases of travel to Syria.

The official said the number of Islamist extremists on the radar screen of French security services had grown to more than 15,000 and one growing concern was how quickly radicalization was taking place, with investigations establishing that Nice truck attacker Mohamed Bouhlel, who killed 84 on July 14, was radicalized in just two months. Attacks instigated by ISIS over the Internet have also become a growing concern.

Rachid Kassim, a 29-year-old French ISIS recruit in Syria, is suspected of stage-managing plots by radicals who have remained in France by communicating with them through the encrypted Telegram messaging app. He was linked to a string of plots this summer, including the killing of a police couple, the killing of a priest and an attempted attack on Notre Dame cathedral, but appears to have gone offline in recent weeks, French security sources told CNN.