Dow at record as Trump rally continues on Wall Street 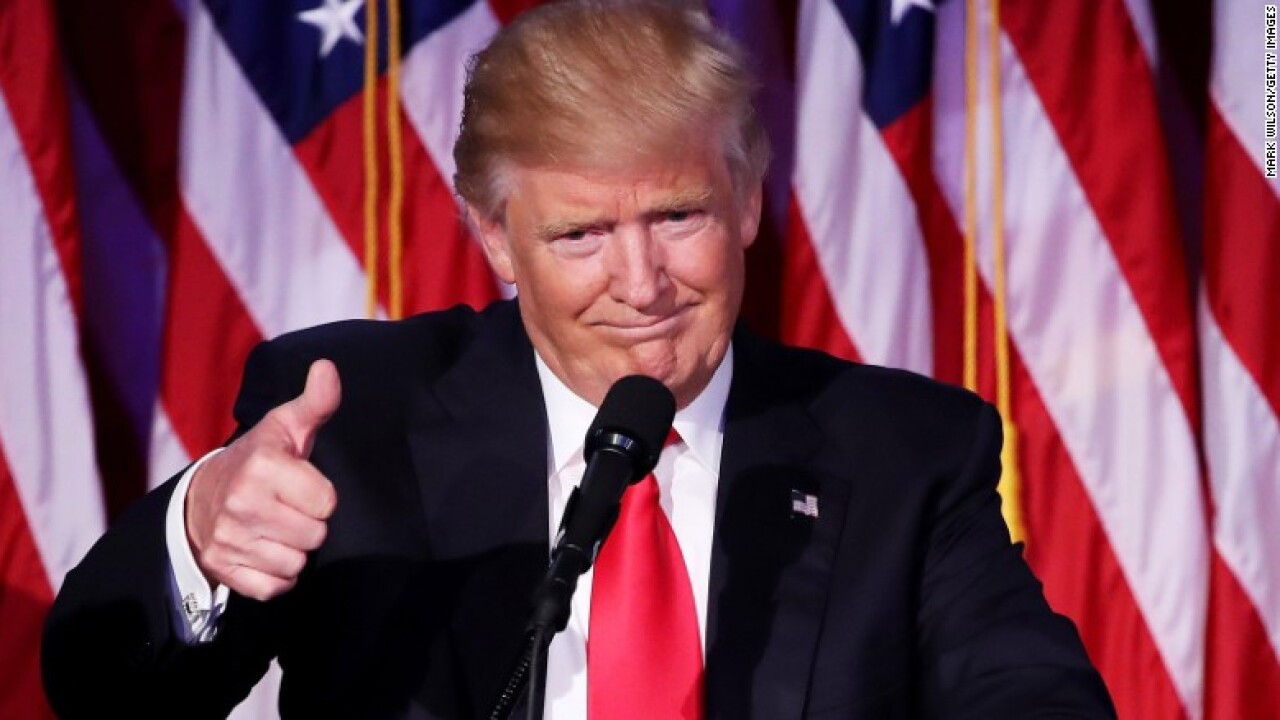 NEW YORK — The Dow Jones Industrial Average was poised to hit a new record high Tuesday morning — and could possibly top 19,000 as the stunning market rally since the election of Donald Trump continues on Wall Street.

The Dow, which includes 30 brand name, blue chip stocks such as Coca-Cola, Walmart, Microsoft, Disney and General Electric, is now up nearly four percent since Trump defeated Hillary Clinton to become the next president of the United States.

The S&P 500 and Nasdaq are also at record highs.

What’s more, CNNMoney’s Fear and Greed Index, which measures seven indicators of market sentiment, is now in Greed territory and is not far from Extreme Greed levels. It was registering Fear just before the election.

That’s because investors were initially wary of Trump.

The market actually fell for nine straight days in the two weeks leading up to the election, as Trump’s campaign gained momentum due to concerns about Clinton’s emails.

Ironically enough, the market rallied sharply the Monday before Election Day after FBI Director James Comey cleared Clinton — an event that many investors interpreted as a sign that Clinton would wind up defeating Trump after all.

So what’s changed? The market now seems to think that Trump’s win, combined with Republicans retaining control of both the House of Representatives and Senate, should mean that many of Trump’s market-friendly policies will be enacted.

Investors are betting Trump will get a stimulus package passed that will help rebuild much of the nation’s infrastructure. That’s why stocks like Caterpillar and U.S. Steel have surged since the election.

The market is also betting that Trump may roll back some of the provisions of two signature laws passed during the Obama administration — the Affordable Care Act and the Dodd-Frank Wall Street Reform and Consumer Protection Act.

Drugmakers Merck and Pfizer have rallied on hopes that the Trump administration won’t focus so much on reining in the price of medications as Clinton might have. This could also be good news for health insurers.

And Wall Street banks JPMorgan Chase and Goldman Sachs have popped on expectations that Trump will be more lenient to financial firms.

Retailers and other consumer stocks could do well also. Investors are betting that economic stimulus combined with the possibility of lower taxes could put more cash in the pockets of average Americans.

As such, market strategists at RBC put out a report Monday that highlighted 40 large stocks that could thrive for the next four years.

The list was dominated by banks,. retailers and healthcare companies and included well-known firms like U.S. Bancorp, Capital One, Kohl’s, Best Buy, Aetna and Anthem.

But America’s largest companies aren’t the only ones that are on fire lately. The Russell 2000, an index that holds smaller U.S. companies, also is at a record high.

Investors are betting that Trump’s efforts to bolster the U.S. economy will be great for smaller companies, which tend to have less exposure overseas.

Along those lines, the market strategists at RBC put out another report Tuesday that featured 40 smaller and mid-sized companies that could do well during a Trump administration.

That portfolio was also dominated by financials, retailers and healthcare. Big Lots, Rent-A-Center, PharMerica and Genworth Financial were among the companies making the cut.