🦃The Gobbler: This delectable sandwich will change your Thanksgiving 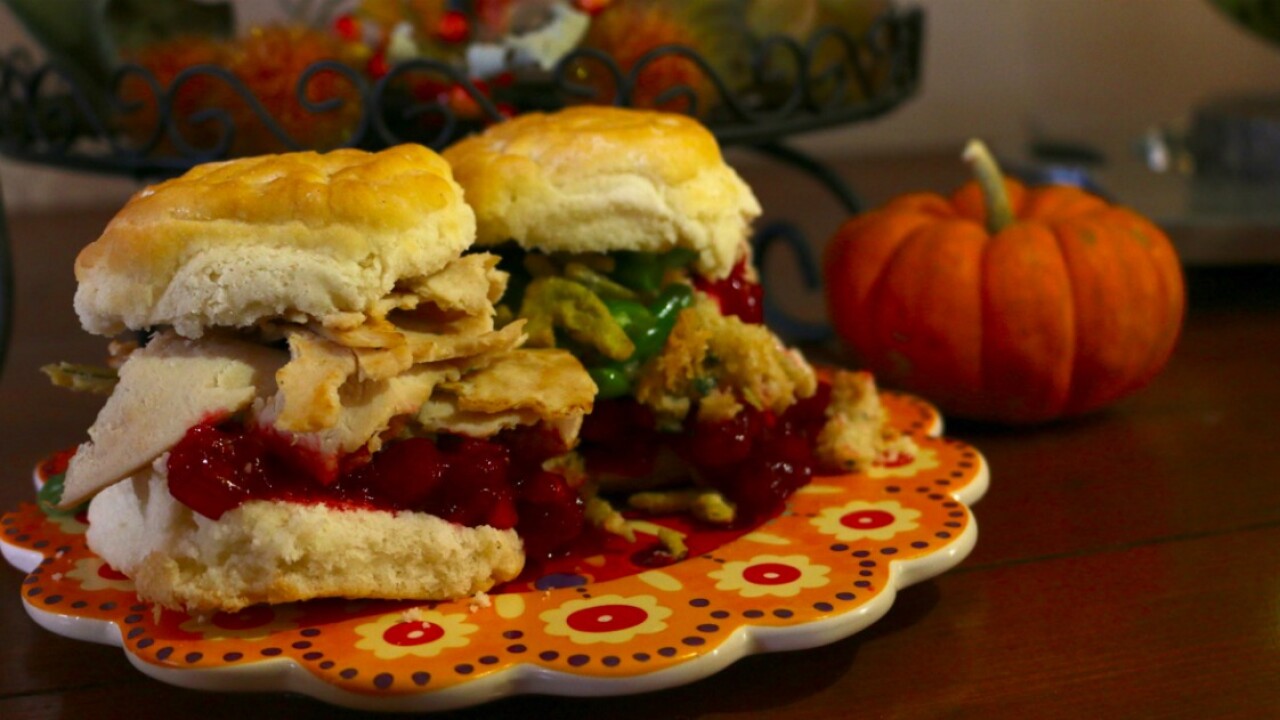 RICHMOND, Va. — Not everyone has the time, table space, or patience to lay out a grand Thanksgiving spread resplendent with glistening turkey, mountains of mashed potatoes that require pickaxes to devour, or biscuits that are so golden they can be measured in carats.

For those who prefer a football game or parade on Thanksgiving, there are alternatives that do not even require the eater look down to enjoy dinner.

When in a rush, or simply not preferring to eat everything separately, there is an answer.

No more will eaters have to fiddle with complicated utensil maneuvers to top the cranberry sauce on the turkey or precariously snag a green bean. This sandwich is the portable version of the fabled Thanksgiving dinner that delivers just as much joy with half the cost.

Despite the revolution that this sandwich will start, it retains the hallmarks that give the holiday its definition, namely, turkey.

This sandwich holds a massive amount of turkey, but does not overpower the eater with dryness so commonly associated with the bird.

The cranberry sauce, which in this version contains nuts and pineapples, delivers an extra sweetness and crunch as well as a dampening companion to the turkey, preventing the user from downing gallons of water in the process.

To add extra smoothness to the palette, stuffing is included that is the perfect glue to hold this admittedly messy sandwich somewhat together. Messiness does not always indicate unhealthiness, and in this sandwich it at least holds partially true.

To counteract any possible heart palpitations that may occur mid-bite, green beans are added for an extra crunch and chlorophyll intake.

However, these healthy effects are almost immediately overshadowed by a healthy dose of fried onions.

You can’t have Thanksgiving green beans without them; don’t try.

Crowning this collage of relative unhealthiness is a biscuit that is barely able to hold the mountain beneath.

However, with a sturdy enough grip, eaters can contain the behemoth and the rewards of the explosion that occurs with each bite.

Sandwich consumption was not documented in the original Thanksgiving, but I’m sure if the diners knew about it then, they would have scrapped all the separate-plate-banquet business and gone handheld.

Though Thanksgiving is a holiday essentially unchanged in its format, there is always a time and place for improvements. When speed is a concern but quality the ideal, never fear, the Gobbler is here.

Take the biscuit and using a knife or hungry hands, separate.

Then take a handful or two of turkey, too much is the right amount, and delicately cram in as much as possible.

While trying not to devour the whole thing, add spoonful of cranberry, enough to lightly cover the other half of the biscuit.

When finished, the sandwich should be barely large enough for the eater to grasp.

If there is no strain in the mouth muscles whilst devouring, add more; you got room.

For those not seeking absolute perfection in sandwich form on Thanksgiving, here are a few alternatives that come close but do not live up to the soon to be legendary Gobbler.

The prospect of cooking a whole turkey is often an effort fraught with kitchen fires, oven theft, and tupperware shortage. Or, as in my case, the lack of an oven that doesn’t short circuit when heating even the smallest biscuit.

If I want turkey without the hassle or impending fire, I go with a TBLT (turkey bacon, lettuce, and tomato).

Though perhaps not as widely consumed as its hooved alternative, it delivers the same effect without the often maligned ill effects.

I usually prefer pumpernickel bread, mustard, and avocado to mine, but the beauty of a sandwich that is an acronym for its ingredients is its flexibility.

I’ve even seen BLTs with all manner of ingredients, some of which I don’t want to mention. Despite this, the inclusion of turkey into the sandwich at least makes it slightly more Thankgiving-y.

Another frequently, so-called healthy, heralded alternative is the turkey Reuben that eliminates beef for turkey.

When switching up meat such as this, often other ingredients have to be changed to accommodate the shift. In the case of the turkey Reuben, instead of Swiss, I use Muenster cheese because it tastes good on anything.

I’ve heard tell that it is sometimes eaten on boiled sneakers because of its transformative properties. Not that I’ve tried it.

Sauerkraut is still included, though I prefer a bit of spice in mine.

If making it from scratch, add jalapeno or red pepper to the brine.

If using store bought kraut, just buy a jalapeno with it or add Cholula.

It works on everything and cures certain forms of the flu. I think.

Though the Reuben debate of whether to use Thousand Island or Russian dressing wages fierce and has broken countless families and diners apart. In the case of the turkey Reuben, I prefer Thousand Island dressing because of its relative lightness to the Russian counterpart.

What doesn’t overpower a sandwich only makes its other ingredients stronger.

Patrick Mckeown is a sandwich-holic who admittedly spends too much time reading about and digesting sandwiches. Send him sandwich related story ideas here.