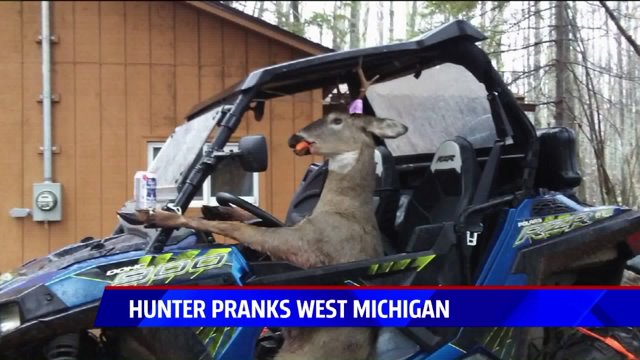 GRAND HAVEN, Mich. – As Jeremy Roomsburg jetted down I-96 on his way back from a high school football game in Michigan  on Saturday, he had to do a double take.

After all, it’s not often you see a deer cruising down a major highway.

“We were all stunned and were like, ‘did we really just see that?’” said Roomsburg over the phone with FOX 17. “We had to slow down and actually drive past the guy again to get the video.”

First, the deer wasn’t actually driving. It was a buck Mike Huntoon and his hunting buddies had bagged during an outing that week at Camp Preach No More in the Upper Peninsula. But the video Jeremy shot has garnered thousands of likes and shares, and millions of views in the course of just a few days.

The prank was the result of a simple lack of space. While Huntoon and his group were packing up for the ten hour drive back to Grand Haven, they realized they may not have room for a deer Huntoon’s son had caught – one of five they bagged that week.

“We thought, let’s just have a little fun with it,” said Huntoon, who admitted he deliberately disobeyed his wife’s request to not put deer in the four-wheeler. “We have to get the deer home, let’s see if we can create a little humor…and apparently it worked.”

Better than Huntoon or Roomsburg could have ever guessed. As of the publishing of this story, the video has received over 15,000 likes, over 150,000 shares, and has attracted the eyes of 6 million Facebook users.

Propped up, hat on and beer in hand, the guys say it took them about an hour to get the buck into place. To them, it was worth the effort.

Huntoon has been an avid hunter for decades, but this is a first for even this seasoned outdoorsman.

“What a different way to haul a deer home!” Huntoon said.