School bus driver asked kids if they were ‘ready to die,’ report says 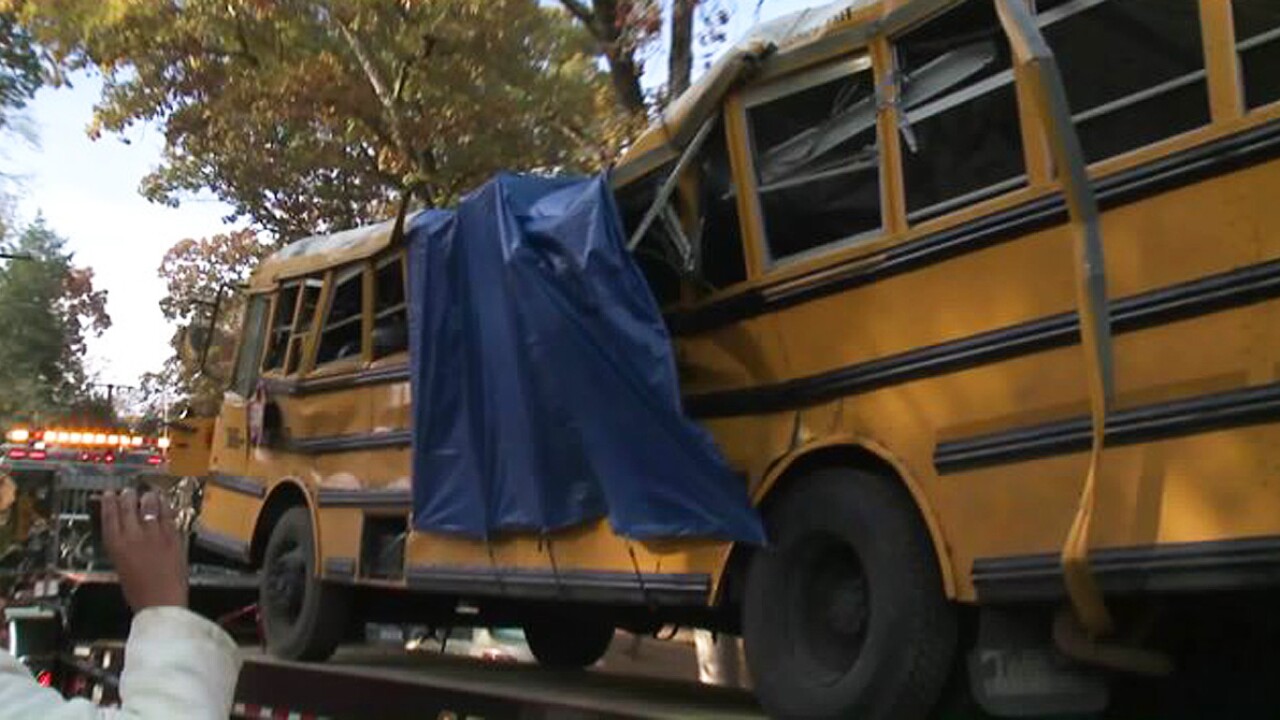 CHATTANOOGA, Tenn. - A mother told reporters that a Chattanooga school bus driver asked the kids onboard if they were "ready to die" prior to the crash that killed at least five children and left six others hospitalized in an intensive care unit in Tennessee Monday.

The mother, who had three children on the bus, including one who was killed in the crash, told a reporter the bus driver spoke to the children moments before the collision, according to television station WWJ-TV.

“The mother says that in the moments before the crash, the bus driver said something to the effect of ‘Are you all ready to die?’ and then seconds later, the bus was on its side and five kids were killed,” the reporter said, according to WWJ-TV.

The bus driver, identified as Johnthony Walker, 24, has been arrested and charged with five counts of vehicular homicide, reckless endangerment and reckless driving.

"Five is a cursed number in our city right now. We are ... dealing with an unimaginable loss," Mayor Andy Berke said. "The most unnatural thing in the world is for a parent to mourn the loss of a child."

Authorities arrested the bus driver, 24-year-old Johnthony Walker, charging him with vehicular homicide. But investigators are still working to pinpoint what caused the crash.

There's one key possibility authorities have already homed in on: speed.

The school bus, which had dozens of children onboard, was barreling down a narrow and winding road Monday afternoon, according to an arrest affidavit.

"Mr. Walker lost control of the bus and swerved off of the roadway to the right, striking an elevated driveway and mailbox, swerved to the left and began to overturn, striking a telephone pole and a tree," the affidavit says.

Witness statements and physical evidence showed that Walker was traveling "at a high rate of speed, well above the posted speed limit of 30 mph," according to the affidavit.

Driving conditions were clear and dry, Chattanooga police Chief Fred Fletcher said, and no other vehicles were involved in the crash.

Walker has been charged with five counts of vehicular homicide, reckless endangerment and reckless driving. He could face more charges as the case proceeds to a Hamilton County grand jury, the police chief said.

Investigators are interviewing witnesses, but they'll also have other evidence at their disposal, including video and an informational box from the bus.

A National Transportation Safety Board team arrived in Chattanooga on Tuesday morning. Among the questions investigators will be weighing: What was the driver's history? What was the history of his employer, Durham School Services? And can anything be done to stop crashes such as this from happening in the future?

"We certainly send our condolences to the parents of those children. My daughter rides a school bus every day. I understand that," safety board Chairman Christopher Hart told reporters earlier. "We will do everything we can to try to prevent this from happening again."

Bus driver's mother: 'He was terrified'

After the crash, Walker's mother says she got a phone call from her son, who told her he'd been in a "drastic accident" and tried to explain what had happened before police took his phone away.

"When he talked to me, he was terrified," Gwenevere Cook said.

"He was trying to get them (children) off the bus -- all the bodies were limp. There was blood everywhere. He has been cooperating with the police. He texted me minutes later saying the kids are dead," she said.

Cook expressed condolences for the victims' families and asked for compassion for her son, describing him as a respected man and a father of a 3-year-old son who worked two jobs and had never been in trouble before.

"It is a horrible nightmare," she said. "I feel bad for my son, and I am torn up for the (victims') family members."

Of the five children confirmed dead after Monday's crash, three were fourth-graders at Woodmore Elementary School, one was a first-grader and one was a kindergartner, according to Kirk Kelly, interim superintendent for Hamilton County Schools. Six students remain hospitalized in the intensive care unit, and six are in regular rooms at the hospital, Kelly said.

"There are still some unanswered questions at this time, but our priority remains with our students," Kelly said Tuesday morning, adding that counselors would be at the school for anyone who needs to talk.

"There are no words that you can say," Kelly said. "This is something that you'll never get over ... but we're just doing what we can and reaching out and offering words of comfort and support to the families."

Durham School Services, a company that transports more than 1 million students daily at schools across the United States, said it was working with police and school officials to investigate.

The company's website -- which normally depicts smiling children and bright yellow school buses beside a pledge about getting students to school safely -- was black on Tuesday, greeting visitors with a somber statement about the Chattanooga crash.

"Our entire team at Durham School Services is devastated by the accident yesterday that tragically claimed the lives of Chattanooga students," the statement said.

'I just heard a big boom'

A woman who lives near the crash told WDEF the impact was so powerful it knocked her power out.

"I just heard a big boom," the woman said.

A tweet from the Chattanooga Fire Department showed the bus on its side against a tree as emergency officials extricated the last passenger through the back door.

Blood Assurance, a local blood bank, extended its hours at three locations as "hundreds and hundreds" of donors flocked to give blood to treat crash victims, spokeswoman Mindy Quinn said.

"We have had people who were refusing to leave until they give blood," Quinn said.

Rebekah Bell said she arrived to donate Monday night and saw the line out the door, "full of college students, older people, and police officers who dropped everything to give blood."

She waited three hours for her chance.

"My community rallies in the face of tragedy," she said on Instagram.