When was the last time you saw a kid with a paper route? 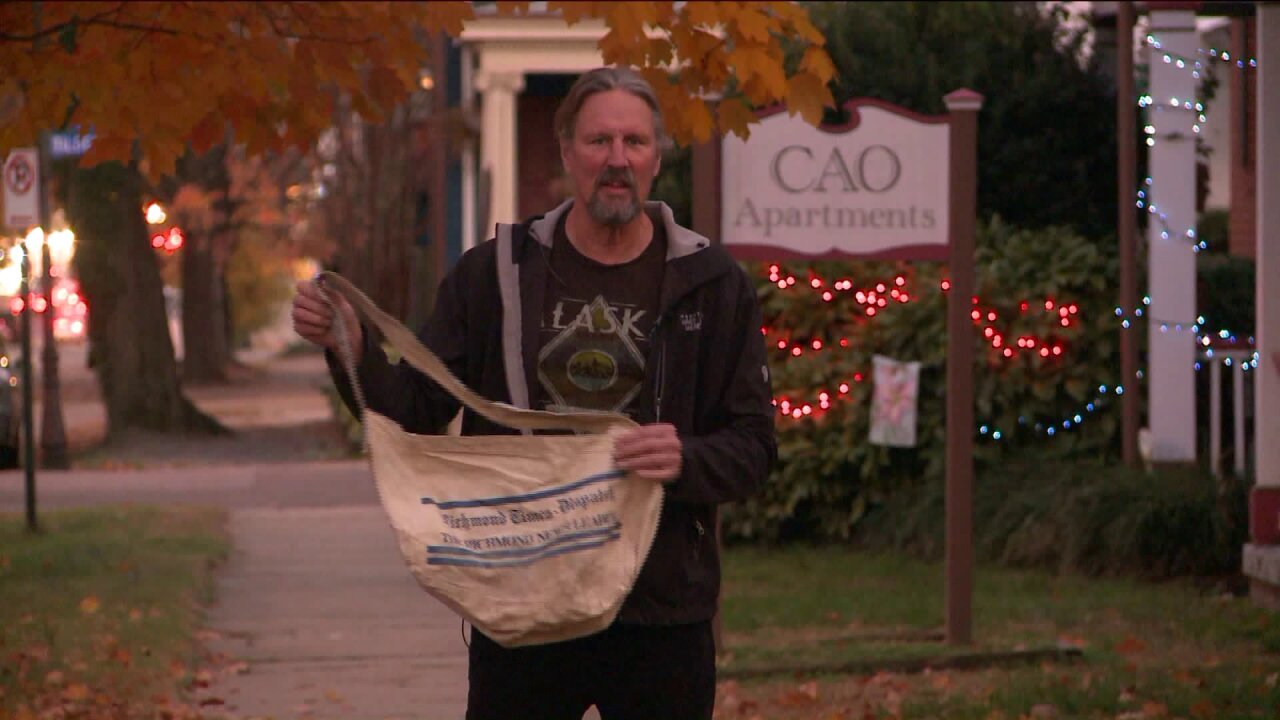 RICHMOND, Va. -- The other day, while working on a story, I was given an old newspaper carrier's bag with the Richmond Times Dispatch and Richmond News Leader logos on it.

Obviously, it was from a much different era. Not only do we not have the afternoon paper anymore, but kids no longer deliver the newspaper on paper routes.

I posted a photo of the bag and a few words about this almost forgotten tradition on social media and heard from several former paper boys - and girls - who loved the experience.

"Ohh, 1968 and 1969," recalled Richard Smith, a lifelong entrepreneur I caught up with while he was exercising in Byrd Park.

He was 13 when he started his route in Church Hill. "Great experience. It was my first job . . . It was more family oriented in that day. Once they knew you were the paper boy, you had nothing to worry about, nobody to worry about. Everybody was cool!”

He vividly remembers rushing home from school, "changing your clothes, grabbing your bag, and head to 33rd and M and pick up my bundles of 100 papers and service the neighborhood."

He loved his customers, Smith said, and they loved him. Many still remember him 40 years later.

He and others I heard from talked about the early lessons learned: discipline, promptness, diligence, hustle, salesmanship, teamwork, financial management, taking care of your equipment, having a bank account and some strong hints about human nature.

"Toughest part was going out and doing the 'collecting,'" wrote Ronnie Keith Owens. "The first customers to complain were usually the last to pay. Great experience."

"He taught me a lot," Smith said. "There was no prejudice. It was just doing your job."

I caught up with the legendary Shotwell at his Henrico home.

He said it used to be a "badge of honor" for a youngster to have that newspaper bag.

"Some of the routes were very hard to get . . . One of the hardest jobs I think I had as a district manager was to go to a home and tell the parents that their child wasn't going to have a paper route anymore," said Shotwell.

He's not sure why kids stopped scrambling to have a paper route. "All the routes now are adult carriers."

It's not just newspapers. When was the last time you saw kids offering to mow grass, rake leaves or shovel snow?

When was the last time you saw a 14-year-old with a work permit washing dishes or waiting tables in a restaurant? (That's when I started, says this old fogey mumbling about "when I was a kid . . .")

I got curious and checked with Wendy Inge, director of labor and employment law with the Virginia Department of Labor and Industry.

Fifteen years later, in 2015, there were about a quarter many permits issued, just under 5,300. We're on that same slow track this year.

There's no question we live in different times. Most parents are afraid to let their children walk or ride bikes unsupervised in their neighborhoods, let alone carry sums of money. Child labor laws likely have left many unaware that it's perfectly legal for 14 and 15 year olds to work.

Nationally, for older teens 16 to 19, employment has fallen dramatically - more than a third - in the past 20 years, according to a 2014 report from the Pew Research Center.

Certainly the recession has pushed adults into jobs once reserved for youngsters learning their way.

But there's little doubt that young teens getting an early start in the work world has become the exception rather than the norm.

"As far as the young folks," Smith said, "they don't have a clue on how we did it back in the day."

As for Shotwell, who started carrying the Washington Daily News at age 12, "We had no problem back in those days having a child get up at 5 in the morning and carrying papers, or out at 6 or 7 (at night) collecting."

Nowadays, "I have a hard time finding a kid mowing the lawn now . . . I guess the computer age had a lot to do with it."

But Shotwell's not worried too much about it. "I believe we're going to be all right, Mark."

Me, I'm not so sure. It seems we've insulated our children from the sweat, risk and hard knocks that come with living.

These days, it's all about protecting our kids - maybe too much.

We definitely shouldn't be protecting them from one of life's big lessons: that you're going to have to work, and work hard, to make it in this rapidly changing world.

Years ago, while doing a newspaper archive search, I found indications that a common parting salutation for men back in the late 1800s and early 1900s was to say, "Work hard!"

What do we say now as we leave our friends and co-workers?

We've been saying that for a full generation now. We can see how much we've changed during those years while reading our daily newspapers - and while seeing who's carrying them.