No, Newsweek’s Clinton cover is not proof the election is rigged 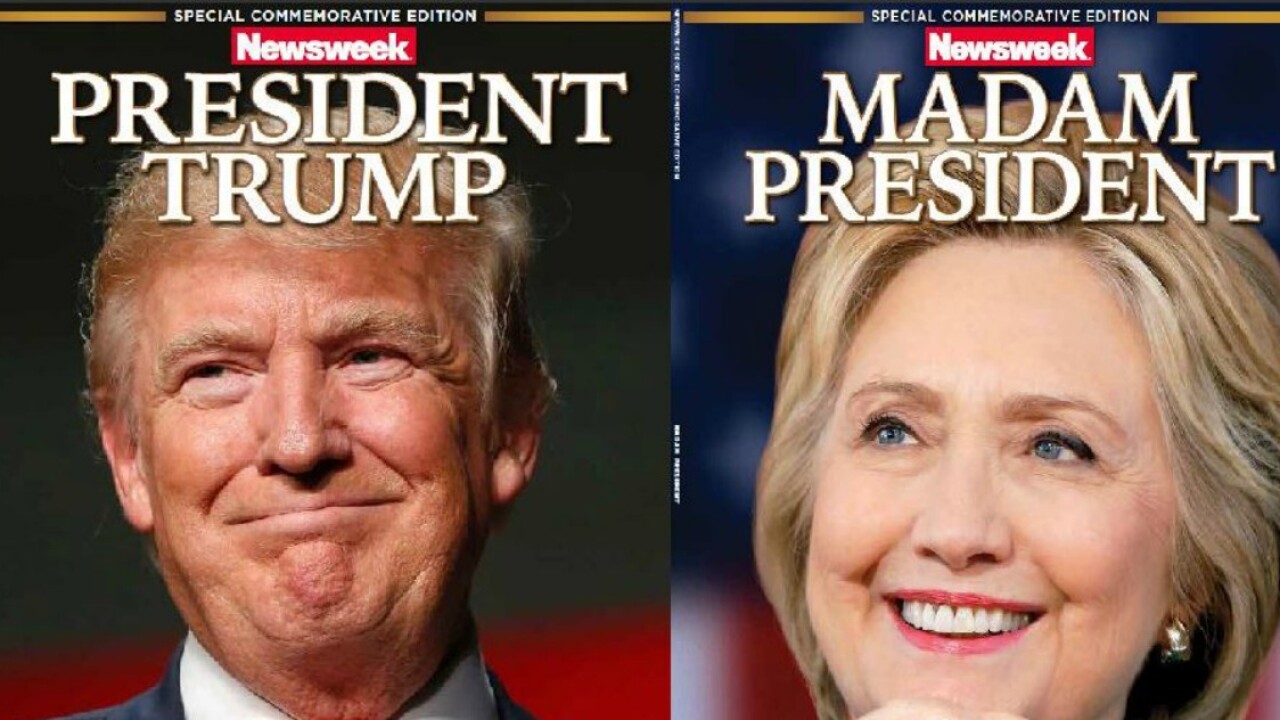 Yes, a commemorative edition of Newsweek is being cited as evidence that Hillary Clinton is stealing the election, and that the news media is in on it.

Right wing blogs and Facebook forums lit up with the fake news on Monday after a woman tweeted out a picture of Newsweek’s “Madam President” cover.

Most of the sites ignored the obvious explanation: A Clinton cover and Donald Trump cover are both in the works. Some people would rather just believe the conspiracy theory.

When asked to comment on the Clinton cover flap, Newsweek editor Jim Impoco responded very simply: By sending a picture of the President Trump version of the cover.

This is the media version of World Series keepsakes that were on sale in Cleveland and Chicago last week. Street vendors printed “Cubs win” and “Indians win” T-shirts, then trashed the Indians shirts after the Cubs won Game 7.

From the Editors: 2 special edition covers for 2016 election outcomes were produced by a Newsweek licensee, Topix Media, and not by Newsweek pic.twitter.com/MwC4RytGbC

The commemorative editions are actually produced by a separate company, Topix Media, under the Newsweek banner.

“For the past six months Newsweek Special Editions has been piecing together a Road to the White House Tribute Issue for both major party candidates,” Tony Romando of Topix Media said on Monday.

Romando shared the introductory pages of the Trump edition with CNNMoney to prove that both versions exist.

But Topix made a business decision to only print the Clinton version ahead of time given that she is almost universally favored to win the election on Tuesday.

If Trump wins, the Clinton copies will be trashed and the Trump version will be rushed to the printing presses — a simple business calculation, Romando said.

Those sorts of decisions are made all the time in the publishing industry. But the over-the-top reactions to the leaked Clinton cover illustrate how some Trump supporters have been primed to believe that the election is being “stolen,” as Trump himself has suggested.

“The fix is in,” said an obscure web site called “DC Clothesline” after a woman who identified herself as a bookstore worker tweeted a photo of the “Madam President” cover.

Other sites with names like “Investment Watch Blog” posted stories about the media “colluding with the Clinton campaign” to prepare for the election.

Then it spread to better-known conspiracy sites like Infowars, which used the outraged reactions of Trump supporters as a news peg for a story.

“One thing we know for certain is that Newsweek will not be publishing a ‘special commemorative edition’ of its magazine that is favorable to Donald Trump if he wins,” Infowars said.

That is not true. Newsweek WILL be publishing a Trump keepsake if he wins, Impoco and Romando confirmed.

The bookseller woman deleted her account after the tweet triggered conspiracy theories on Monday — and that act started brand new theories.

She may have caught some heat at work — because booksellers and magazine shops usually agree not to release publications before their “on sale” date.

Romando explained: “Unlike hard news magazines, commemorative editions for sporting events, elections and unfortunately deaths are created weeks, months, and even years in advance. The largest publishers in America have dozens of tributes ready to print at plants across the country,” he said.

And he brought up the Cubs analogy: “One minute after the Chicago Cubs won the World Series their commemorative T-shirts went on sale and the losing team’s T-shirts were scrapped. As is customary in the collectible consumer goods community. This was a business decision. Not a political decision.”