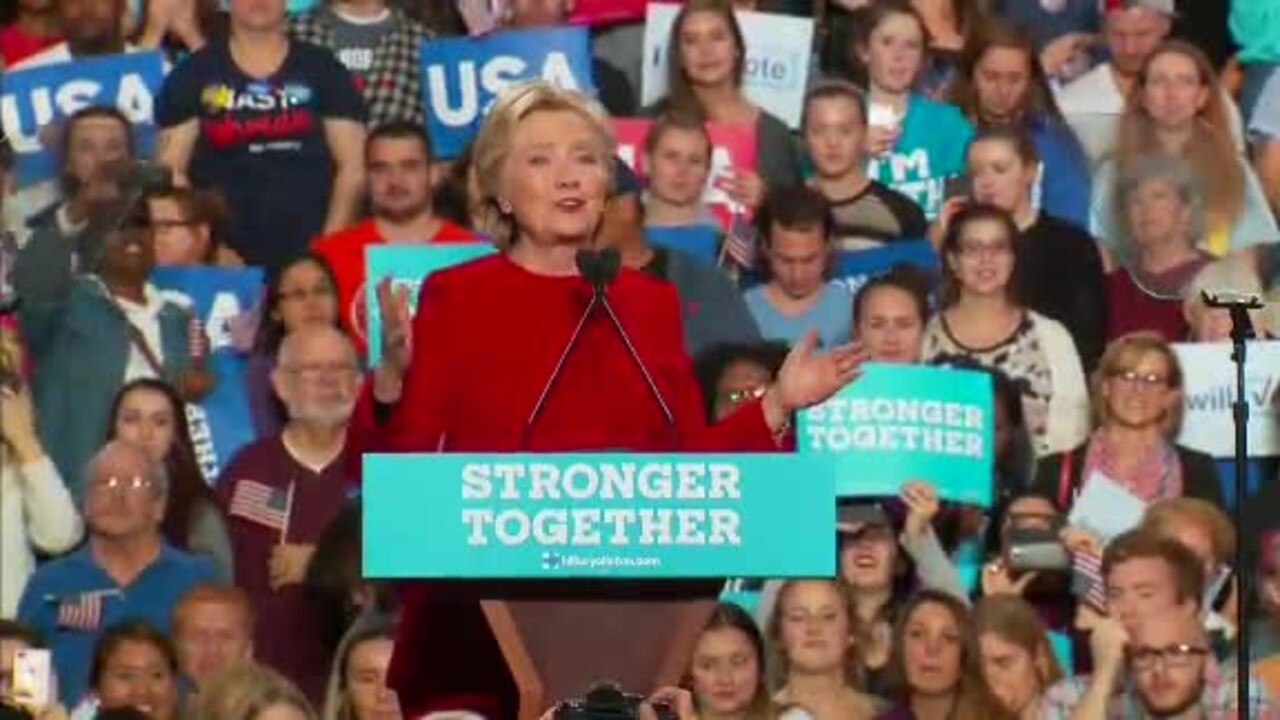 WASHINGTON — President Barack Obama and first lady Michelle Obama sought to lift Hillary Clinton to victory while Donald Trump warned she was the “face of failure” and predicted he would blow her away in Tuesday’s election.

On a dramatic final day of the ugliest campaign in modern history, the candidates and their surrogates held nearly two dozen rallies, chased one another through swing states and made desperate last pleas to voters.

Clinton and Trump both go into Election Day with paths to the White House. But Clinton has many more options to secure the 270 electoral votes needed to win the presidency.

Perhaps reflecting optimism, Clinton stressed national unity in her closing appearances, while Trump returned to his claims that the political system and the media were rigged against him.

The former secretary of state capped her campaign with a remarkable passing-of-the-baton rally with President Barack Obama before a crowd of about 20,000 against the symbolic backdrop of Independence Hall.

“I regret deeply how angry the tone of the campaign became,” Clinton said, prompting one woman in the crowd to shout out “Not your fault!”

But Clinton went on to slam the “many troubling things” Trump had said about women, Muslims, Latinos and African-Americans. She said Trump’s “most horrifying” comment was his warning that he may not accept the result on Tuesday.

“Let’s show tomorrow there will be no question about the outcome of this election!” Clinton said.

Obama introduced Clinton in a speech that was both a firm endorsement and a poignant farewell to politics.

“We now have the chance to elect a 45th president who will build on our progress who will finish the job … who is smart, who is steady and who is tested,” Obama said. “She will work, she will deliver. She won’t just tweet.”

The President said he was betting on Americans not to elect Trump on Tuesday.

“America, I am betting on you one more time,” Obama said, predicting the nation would “reject fear” and chose hope.

Michelle Obama, who has used her popularity to become perhaps Clinton’s most powerful surrogate, called on Democrats to turn out in huge numbers on Tuesday to prevent Trump becoming President.

“This election is on us. It is in our hands,” she said. “If we get out and vote tomorrow, Hillary Clinton will win.”

Trump, meanwhile, presented himself as the face of change for Americans who he said had been let down by a corrupt political system.

The Republican nominee claimed — in defiance of polls showing a mid-single digit Clinton lead — that he was tied with his rival in Pennsylvania, a state that forms a crucial part of Clinton’s Democratic firewall.

“They say we’re tied in Pennsylvania. I don’t think so. I think we’re going to blow them out tomorrow. Blow them out,” Trump said at a rally in Scranton, one of the most hotly contested parts of the state.

The latest CNN Poll of Polls gives Clinton a four-point lead over Trump, 46% to 42%. In most of the swing states that will decide, the race is tight. But if Clinton can cling on to most states that have voted Democratic in recent elections and add at most a couple of swing states, she will likely win the election.

But Democrats are worried about Trump’s strength in the Midwest — particularly in Michigan, which has not voted Republican since 1988. Trump has been making a strong push there amid narrowing polls.

But Clinton’s campaign manager Robby Mook, said late visits to Michigan by both Clinton and Obama Monday were more a function of the calendar and the lack of early voting there than a sign of genuine anxiety.

“Our strategy these last few days is to focus on the states where voting overwhelmingly happens on Election Day,” Mook said on CNN’s “New Day.” “Previously, as you’ve seen, we’ve been focused on states like Florida, Nevada, North Carolina, where the majority of the voting happens early.”

He continued: “So, this is really a reflection of the voting calendar. Donald Trump has been kind of running to each and every state it seems. So they have their strategy. But we have ours.”

Trump has little margin for error.

He will need to win Ohio, North Carolina and Florida, where he is locked in close races with Clinton, just to give him a chance to make the near-perfect run through the remaining swing states that he needs to capture the presidency.

Democrats are particularly encouraged by indications of a surge of Hispanic voters in early voting in Florida and Nevada. But there also are warning signs for Clinton, with African-Americans not as large a proportion of the early-voting electorate as they were for President Barack Obama in 2008 and 2012.

In the latest CNN Poll of Polls data in the swing states, Clinton leads 45% to 43% in North Carolina, the rivals are tied at 45% in Florida and Clinton leads by five points in Pennsylvania, a state Trump hopes to turn red.

In New Hampshire, where the race moved toward Trump in the last week, Clinton is still up up 44% to 41%. New Hampshire only has four electoral votes, but Trump’s path to 270 is so difficult that votes from smaller states could still be crucial for him.

The presidential election is not the only close race that will wrap up on Tuesday. Democrats are battling to grab back the Senate from Republicans. The GOP, meanwhile, is expected to hold onto the House of Representatives, but likely with a reduced majority.

House Speaker Paul Ryan said Monday that he would run again for the top job, despite reports in recent days that he may opt out or that more radical members of his restive caucus could try to oust him, after deeming him insufficiently supportive of Trump.

“I am going to stay — you know why? Because I moved our majority to put out a very specific and coherent agenda. We have it, we’re running on it,” Ryan said on the Charlie Sykes radio show.

Asked who would win the presidential race on Tuesday, Ryan said he genuinely did not know, because “it is such a weird election, such a volatile election.”