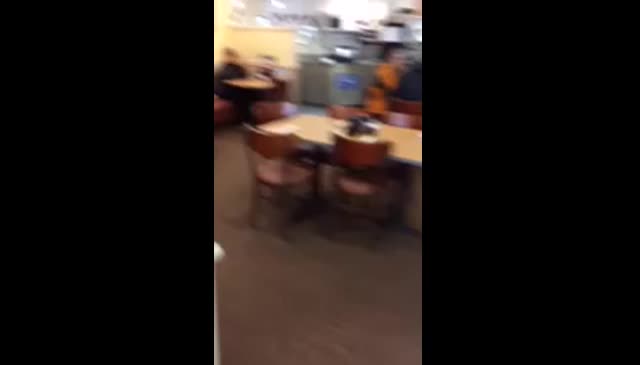 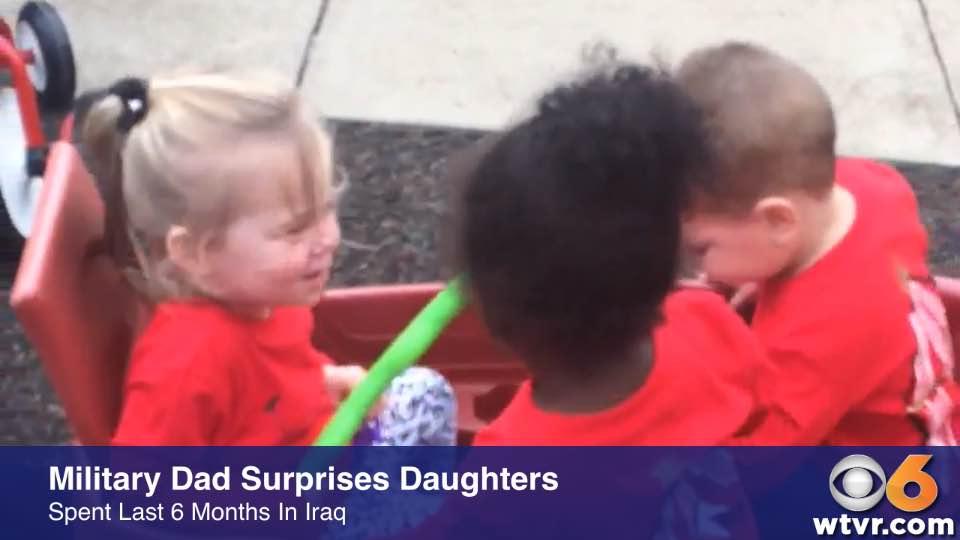 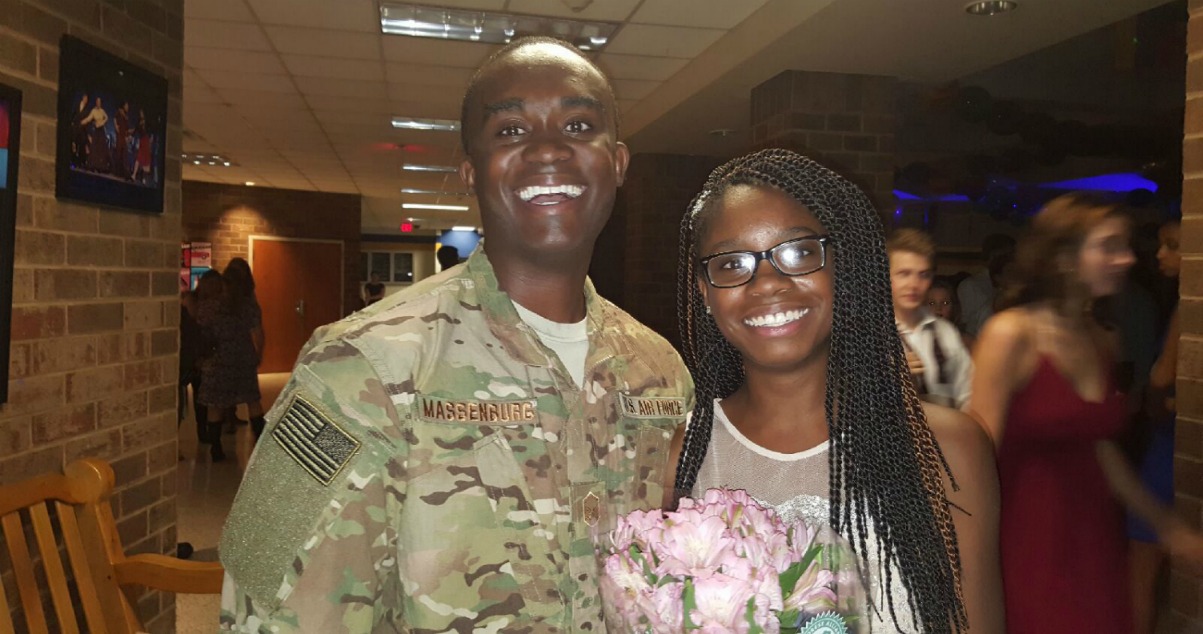 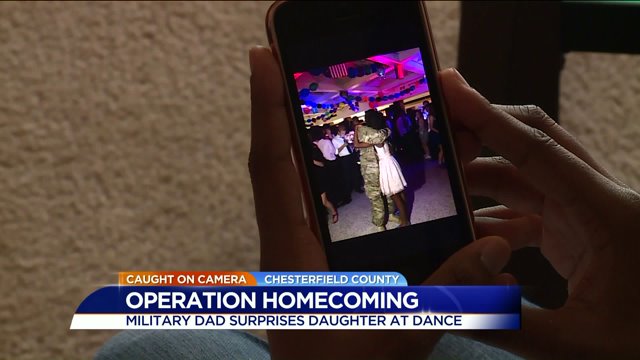 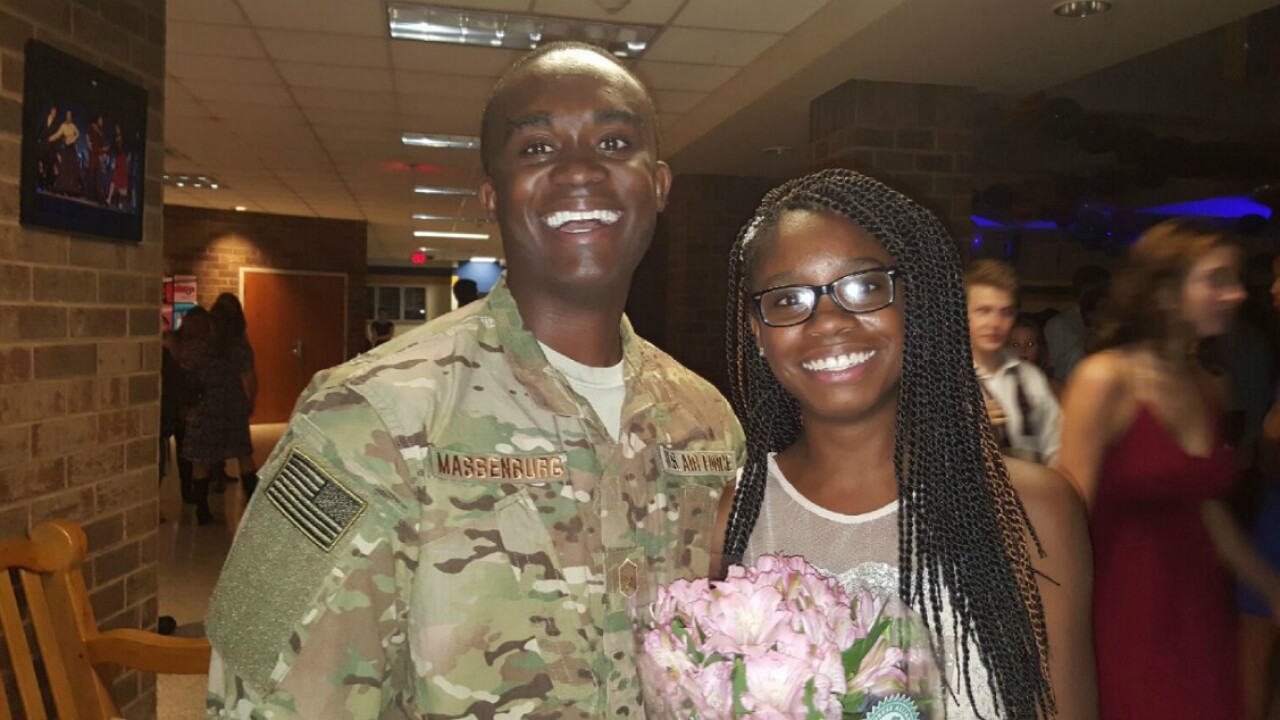 CHESTERFIELD COUNTY, Va. -- As an intelligence specialist for the U.S. Air Force, Master Sgt. Patrick Massenburg is used to executing secret, and sometimes complicated missions. In fact, he has been doing just that for the last six months serving our country in Baghdad, Iraq.

But perhaps his most meaningful secret mission was carried out over the weekend at Midlothian High School in Chesterfield.

Massenburg's daughter Danae' is a freshman at Midlothian and last weekend was her first high school Homecoming dance.

"I was really excited; it was like my first formal. Me and my friends were just excited to have fun and dance all night,” said Danae’.

Her dad was not due back home until the end of the month, but when plans changed, he used the opportunity to surprise his daughter at the dance.

"She was so excited because this was her first semi-formal [and she was] looking forward to getting dressed up," her mother Jonelle Brown said. "It was hard keeping the secret because she wanted to FaceTime [her] dad as she does every day."

"I was pretty upset because I was hoping at least he would get to see me get ready but I know he wasn’t here and had to work,” said Danae’.

Father and daughter could not talk because Patrick was en route back to the States.

"You're always concerned about coming back okay and how your family is going to do," Master Sgt. Massenburg said. "She [Danae'] cried when I told her about this last deployment."

Which is what made Saturday's surprise all the more sweet.

During the dance, the principal called Danae's name over the PA system and told her to come forward because she won a prize.

“All I hear is this lady calling for me. I was like what’s going on? I don’t think I did anything. I didn’t win homecoming queen or anything,” said Danae’.

Danae' thought she was in trouble.

When Danae' turned around she saw her dad and ran into his arms.

“I was just really excited. I was so glad he got to see me at my first formal dance,” said Danae’.  “I was just like oh my gosh, I love you I am so glad you are here.”

"All you see in her face was crying," Jonelle said. "She really was so thrilled. She was holding on to him for for dear life."

"It was really more than I expected," Master Sgt. Massenburg said. "I had never done anything like that. I felt loved and missed. It made  me feel very special."

Master Sgt. Massenburg spent the weekend surprising all his loved ones. Danae’s two sisters and her grandmother were also not expecting his early arrival home.