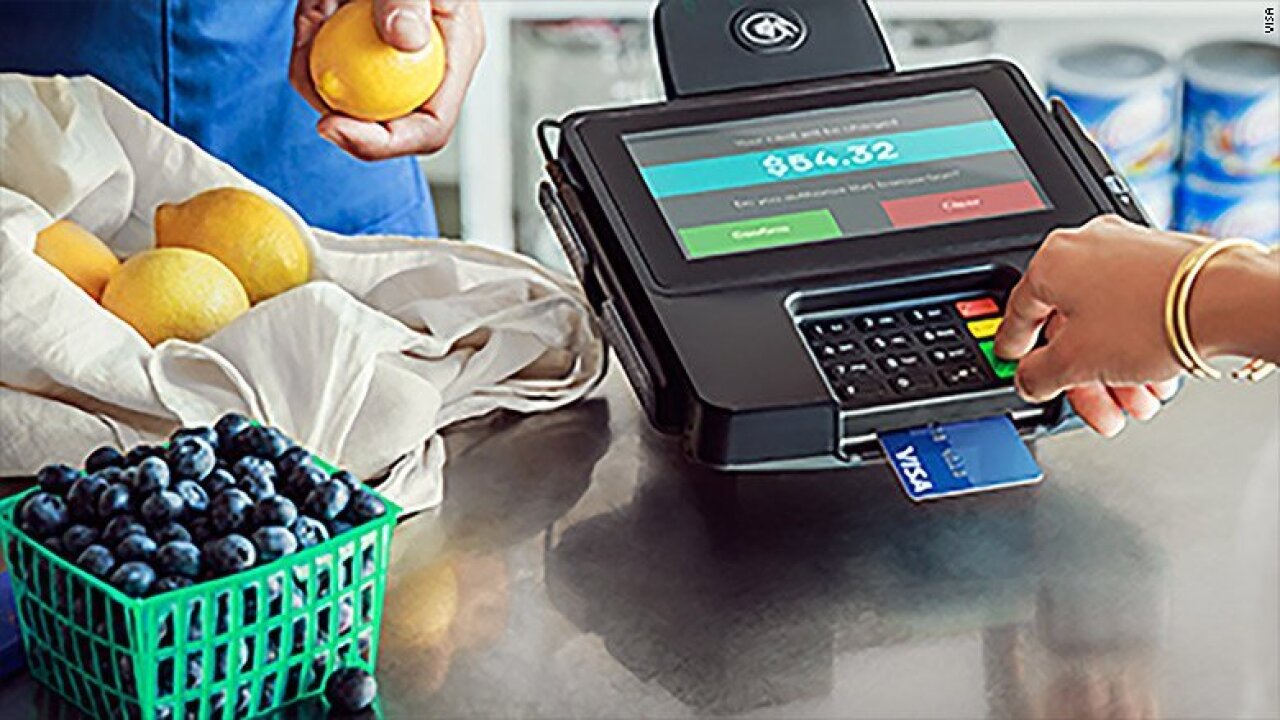 A judge is allowing small businesses to sue the major credit card companies for forcing them to adopt chip readers at the checkout counter — a case that could become a multi-billion-dollar class action. The lawsuit takes aim at the nationwide upgrade to chip-based credit cards, an awkward rollout that’s been annoying for stores and shoppers.

NEW YORK — A judge is allowing small businesses to sue the major credit card companies for forcing them to adopt chip readers at the checkout counter — a case that could become a multi-billion-dollar class action.

The lawsuit takes aim at the nationwide upgrade to chip-based credit cards, an awkward rollout that’s been annoying for stores and shoppers.

Customers have found the system confusing. And it’s much slower to process transactions than the old magnetic stripe cards.

To business owners, it’s a raw deal. They were forced to upgrade to expensive machines that reduce fraud but don’t eliminate it. If they don’t upgrade, they’re penalized by the credit card companies. Stores that don’t install chip readers are on the hook whenever a shopper swipes a stolen credit card — a burden previously shouldered by banks.

These stark terms were designed by credit card companies, banks and major retailers.

The grocery store owners have yet to be granted class action status. If they are, the case could include 8 million small businesses across the United States, according to lawyers involved in the case.

They’re seeking to recoup the costs of upgrading to the chip system, an estimated $6 billion, according to the lawsuit.

The grocery store owners point to something Visa CEO Charlie Scharf told analysts in 2014: that Visa met “in a room” with fellow credit card companies, trade groups, banks and select retailers to come up with a plan.

“It’s remarkable … you don’t get many antitrust cases where the CEO admitted they were ‘in a room,'” he said, according to a court transcript. “I did antitrust cases as a lawyer. I never saw anything this good.”

On Friday, the judge issued an order allowing the case to move forward. He said the case “raises a plausible and reasonable suggestion of collusion” by the credit card industry, which operated “in lockstep.”

According to the grocery store owners, the industry eliminated free market competition by banding together to impose uniform penalties. If they hadn’t, any single credit card company could have offered better terms.

MasterCard spokesman Seth Eisen said the company was disappointed in the judge’s decision but expects to prevail in court.

He said MasterCard has a “strong case that will allow us to put this matter behind us and focus on driving our business and relationships with our customers.”

American Express declined comment. Discover and Visa did not respond to CNNMoney.

The judge has already blocked American Express and Discover from pulling the case out of public courts and dragging it into arbitration, a private system that is often seen as favorable to corporations.

Patrick J. Coughlin, one of the lawyers representing the grocery store owners, said in a statement Tuesday: “Our hope is to secure some relief for the millions of merchants — many of them small businesses — who have suffered and continue to suffer enormous losses from this conspiracy.”