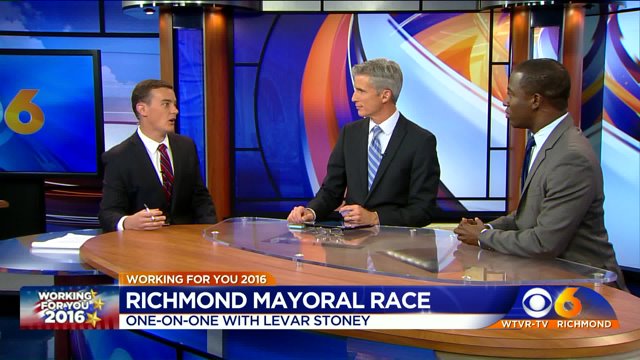 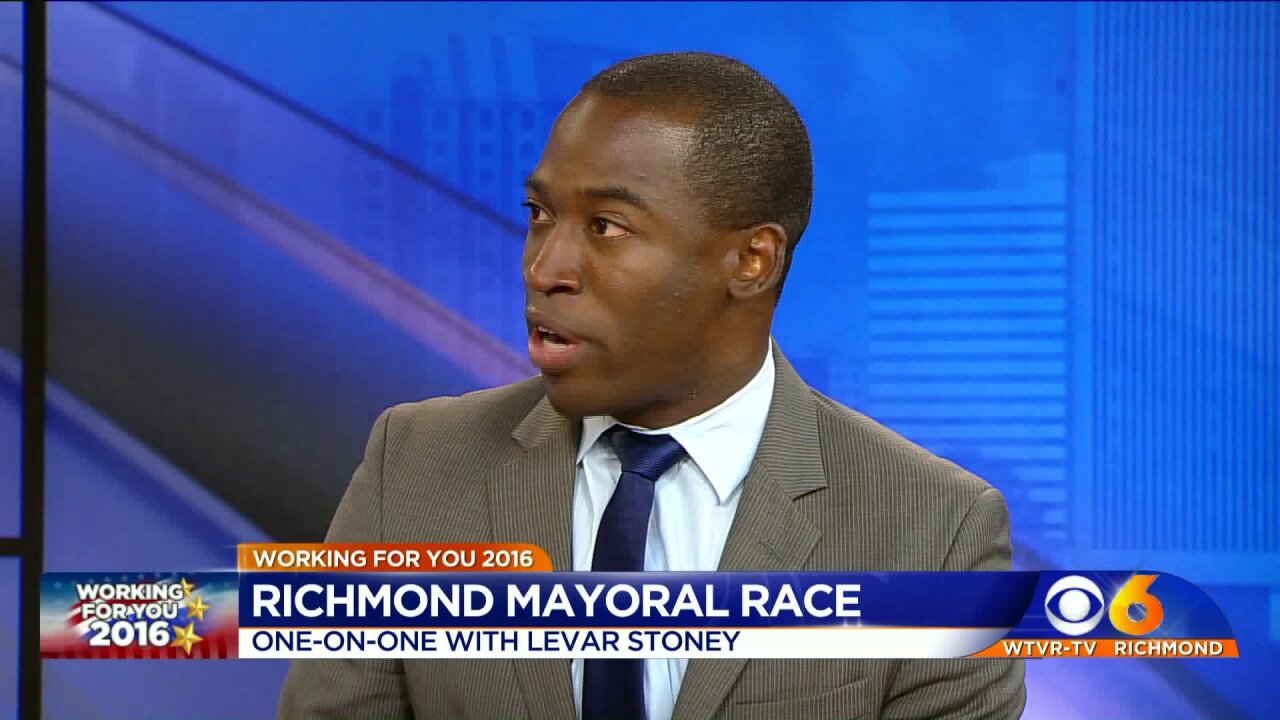 RICHMOND, Va. -- Richmond mayoral candidate Levar Stoney was the first to respond to a CBS 6 interview request where the candidate not only does a studio interview but also takes questions from voters via Facebook live.

Stoney most recently served as Secretary of the Commonwealth under Virginia Governor Terry McAuliffe, but has never been elected to office.

He has raised the most money among Richmond mayoral candidates and was recently endorsed by the Richmond City Democratic Committee, the official Richmond arm of the Democratic Party of Virginia.

Stoney responded to a variety of questions regarding his views on city hall, his philosophies, working with surrounding counties, public servant pay, and the personal story behind his commitment to improving education for Richmond residents.

Stoney pointed to the city’s poverty level as one of the main culprits for a struggling Richmond Public School system.

When asked how he would go about making those changes compared to the current administration, Stoney said the Federal government will play an important role.

“I think I’m the only candidate in the race that has relationships with the next President of the United States Hillary Clinton and our next Vice-President Tim Kaine, who can draw the dollars back down to Richmond 100 miles away. Every single grant program, every single pilot program they may have. I want it here in Richmond.”

Stoney said he plans on being hands-on with Richmond Public Schools and a partner with current Superintendent Dana Bedden.

“I’m going to visit every school; I’m going to be visible so every child can see who their mayor is,” he explained. “How about having a partner so he doesn’t have to have that annual fight with the city council and the mayor about the dollars we’re going to invest in our children. If he gets a partner I think that collaboration breeds accountability. And once we have accountability then we have to produce results.”

When asked about the Dwight Jones administration and some of the city’s recent investments, Stoney laid out his philosophy and how he would do business as the city’s next mayor.

“On the first day of this campaign, I called for a comprehensive performance audit review of every single department in city hall. I want to know how the top performers are and I want to know who the under performers are. We could restructure, realign city hall and we can actually strengthen some of our internal controls and I will invest those dollars back into public education. Public education will be my number one priority,” said Stoney.

“Number two, I will speak to the Redskins, Stone Brewing and UCI Bike Race. We’ve been able to roll out the red carpet... But we’ve been unable to roll out the red carpet for the entrepreneurs, small business owners and taxpayers who live right here in the City of Richmond, who pay their taxes here every single day. I think the next mayor has to focus on that because you pay a premium to live in this city, don’t you think you deserve premium services?”

"My first term will be focused on changing the culture in city hall," @LevarStoney says he will be very hands on as mayor.

“We have to be more creative with our dollars,” @LevarStoney says, adding when asked that he won’t raise #RVA taxes.

When asked about Richmond Police officers leaving the city for surrounding counties, Stoney said he believes all the city’s public servants deserves to be treated better and raised for their service.

“Whether it’s teachers, policemen, or fire fighters… We train some of the best public servants here. They stay here for about five or 10 years. Sometimes they don’t make it to 10 years. And you know what… After we developed them, after we’ve invested dollars in them, they find themselves in Henrico or Chesterfield… I think we need to focus on treating public servants properly and giving them the pay that they deserve.”

“I think we have to focus on treating our public servants properly,” @LevarStoney.

“I’m not going to shed any tears if Jefferson Davis monument is torn down," @LevarStoney. Will focus on memorializing ppl building city up.

Watch the full interview above to hear more from Stoney on his views on city hall, working with surrounding counties, his personal background and more.

CBS 6 has extended an invitation to all Richmond mayoral candidates to appear on the CBS 6 News at 7 and on Facebook LIVE.

Lawrence Williams will be in the studio on Sept. 27. We are working out dates with other candidates, and three have not responded back.