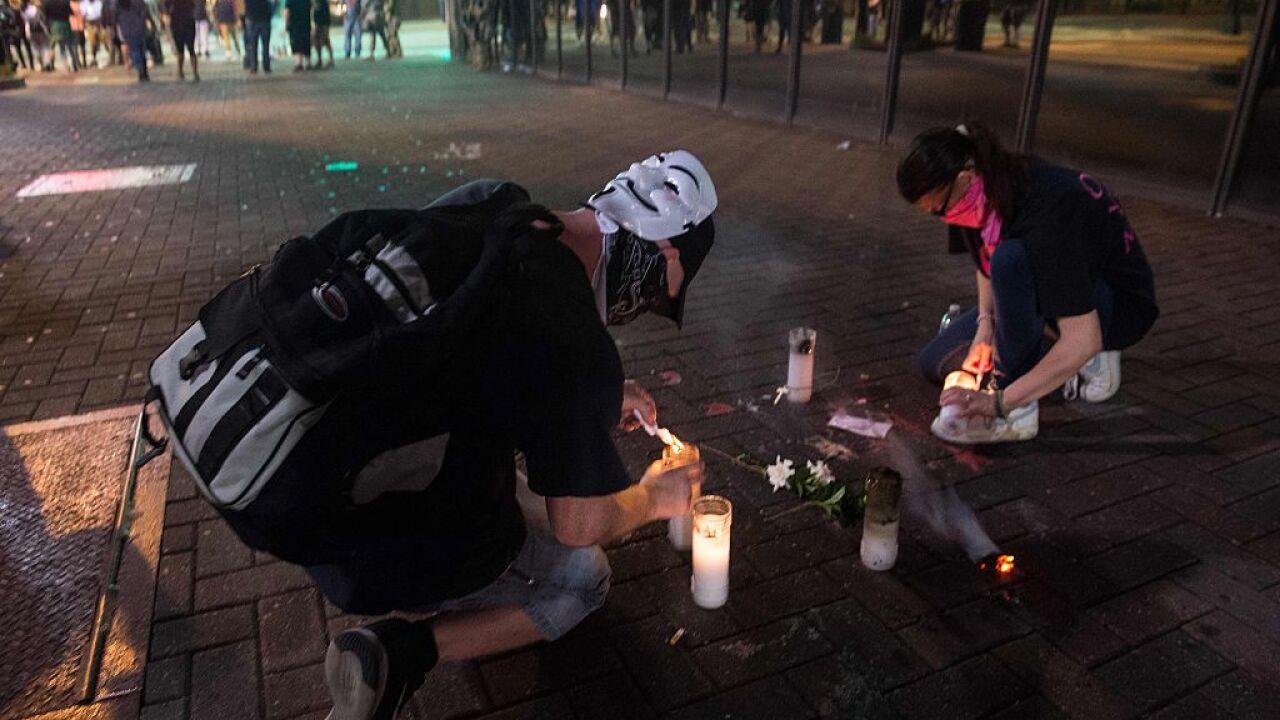 Protesters light candles on September 22, 2016 at the site where Justin Carr was shot on September 21 during a demonstration against police brutality in Charlotte, North Carolina, following the shooting of Keith Lamont Scott by police two days earlier and two nights of riots. Carr died of his injuries on September 22. Hundreds of protesters defied a midnight (0400 GMT) curfew Friday and continued demonstrations in Charlotte, North Carolina over the fatal police shooting of a black man. / AFP / NICHOLAS KAMM (Photo credit should read NICHOLAS KAMM/AFP/Getty Images)

A man has been arrested in connection with the fatal shooting of protester Justin Carr in Charlotte, police in North Carolina said Friday.

Rayquan Borum was arrested Friday morning on suspicion of murder in the death of Carr, a man who police said was shot near a hotel Wednesday night as people protested the police-involved shooting death of a Charlotte man earlier this week.

The video was not immediately released, and Putney did not say what the motive in Carr’s shooting might have been.

“Currently we are still conducting the interview (of Borum) as the investigation continues, but we already have established probable cause and made that arrest,” Putney said.

Protesters light candles on September 22, 2016 at the site where Justin Carr was shot on September 21 during a demonstration against police brutality in Charlotte, North Carolina. / AFP / NICHOLAS KAMM (Photo credit should read NICHOLAS KAMM/AFP/Getty Images)

Victim’s mom: He died for a cause

Carr stopped off at the protest on his way to work, his mother told “Anderson Cooper 360.”

He wanted to be able to tell his grandmother, who marched with the Rev. Martin Luther King Jr., that he had taken part in the protest.

“I know that he died for a cause,” Vivian Carr said. “He wanted me to come down (to the protest) with him.” She said no and she worried that it was getting too dangerous. He assured his mother he would be safe.

“I just want to come down here and help out,” he told her.

Vivian Carr described him as a good man, who liked to talk, and one of his favorite topics was his expectations as a father to be. A son is due in late October.

“He was so excited. He wanted to teach him how to play sports, just as he did,” Vivian Carr said.

“Justin never had any problem speaking out about any particular situation or cause,” Kenneth Carr said.

Shooting came during ‘chaos’ at protest

Carr, 26, was shot Wednesday night as protesters and police faced off outside the Omni Hotel, authorities and witnesses have said. Carr was taken to a hospital, where he died Thursday.

The shooting came on the second night of violent demonstrations over Tuesday’s fatal police shooting of Keith Lamont Scott, a black Charlotte resident who authorities said failed to heed officers’ commands to drop a weapon in an apartment complex parking lot.

Police initially said that a civilian was believed to have shot Carr, but no arrest was made. By Thursday, Putney said investigators were checking allegations that a police officer might have fired the shot, and were reviewing video to determine who did it.

The Rev. Robin Tanner, a Charlotte minister who says she was outside the Omni with protesters when Carr was shot, told CNN that the scene was “chaos,” and it was hard to tell what had happened.

“Justin was behind me; I had a colleague who was beside him. I will tell you, at that point, it was chaos,” Tanner said Friday, before Borum’s arrest was announced. “People were running. some were tripping over others. There was smoke in the air.”

“We had other clergy who were there … and we’ve all concluded in the midst of that chaos that we would not be able to say definitively what happened (to Carr),” he said.

Tanner, in a news conference Thursday, said the shooting happened after police in riot gear walked toward protesters and “marched us into down into the Omni.”

Protesters held a vigil for Carr at the beginning of the night. They stood at the corner where he was shot and prayed for him.