These Charlotte protesters handed out flowers, donuts and hugs 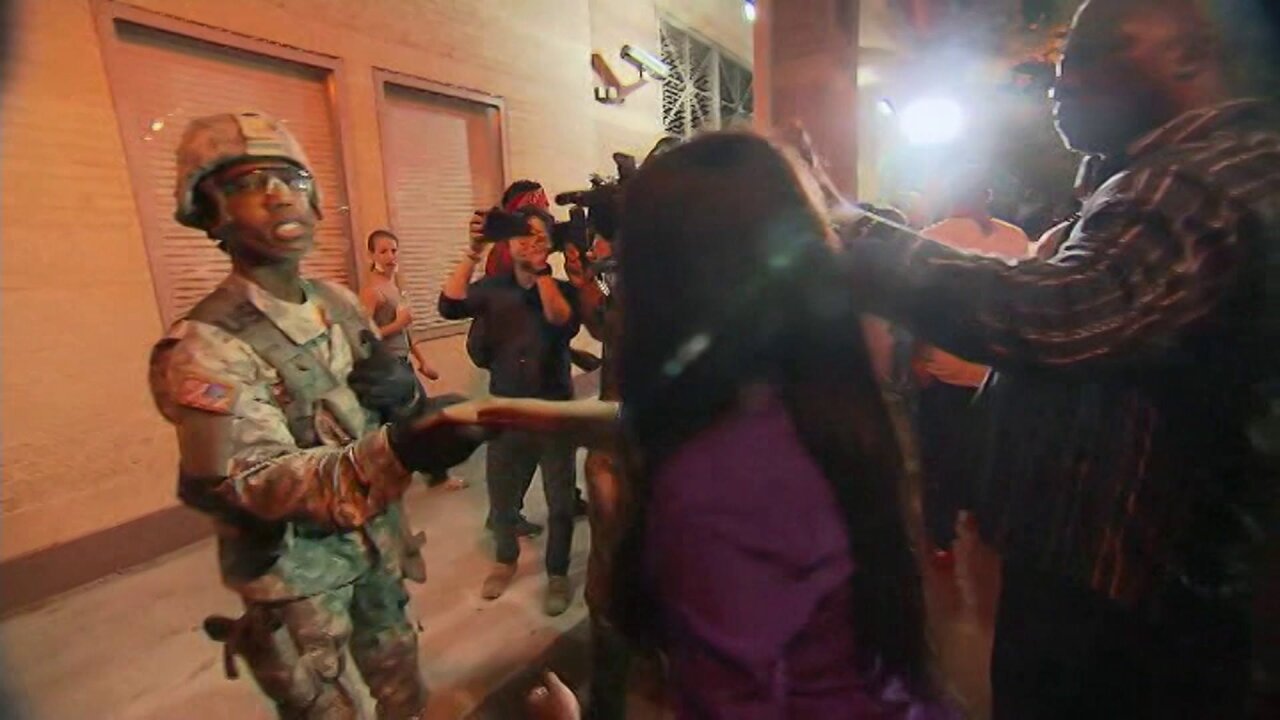 CHARLOTTE — It has been an ugly week in Charlotte. The death of Keith Lamont Scott at the hands of police sparked nights of riots. Property was destroyed, trust between citizens and police eroded and one man was even killed.

But in between the violence and pain, a few bright moments shone out. Then, on Thursday night, the clouds seemed to break. The streets of downtown Charlotte were still filled with protesters, but the activities were mostly peaceful. Protesters and police shared kindnesses and conversation, handshakes and hugs.

The conflict in Charlotte has certainly not dissolved, but these heartwarming moments were reminders of a common humanity.

A truly moving picture from Thursday night featured a woman sharing a moment with a police officer. What could have been an incendiary meeting was instead one of gentleness. Antonique Alexander approached the police officer and pinned a flower on his lapel.

“I drove back to support my city. My city needed me,” said Alexander, 21, a senior at UNC Greensboro. She said she “hope[s] to get some kind of answer” about what happened to Scott.

They shook hands and exchanged hugs

Elsewhere in the city, others formed a line to shake soldiers’ hands and hug them.

They handed out donuts

On Thursday night, the National Guard and police force were armed in heavy riot gear, but one woman, who gave her name as Vera, was armed with dozens of Krispy Kreme donuts and free bottled water to give out to law enforcement.

“I wanted to thank them for trying to protect the city, they’re doing a wonderful job. Not everyone feel(s) the same,” she said, while expressing her disappointment for violence that targeted officers the past two nights.

They raised money for sweets

A mom and daughter dropped off batches of sweets and personally delivered them to three police stations, prompting a proud post from grandma.

” With all the chaos going on in Charlotte, N.C., our daughter spends the day gathering donations of cookies and cupcakes … to show the love, respect and appreciation she and her community has for what they do day in and day out to protect and serve with honor!”

They pitched in for burgers for cops

One resident dropped off 20 pounds of wings and a boatload of burgers at the Charlotte police department.

They made an impact

The Charlotte Fire Department expressed its thanks in a tweet that said, “Very appreciative of our community! Many have supported us with food, coffee, snacks or just plain love. Our city is the best!”