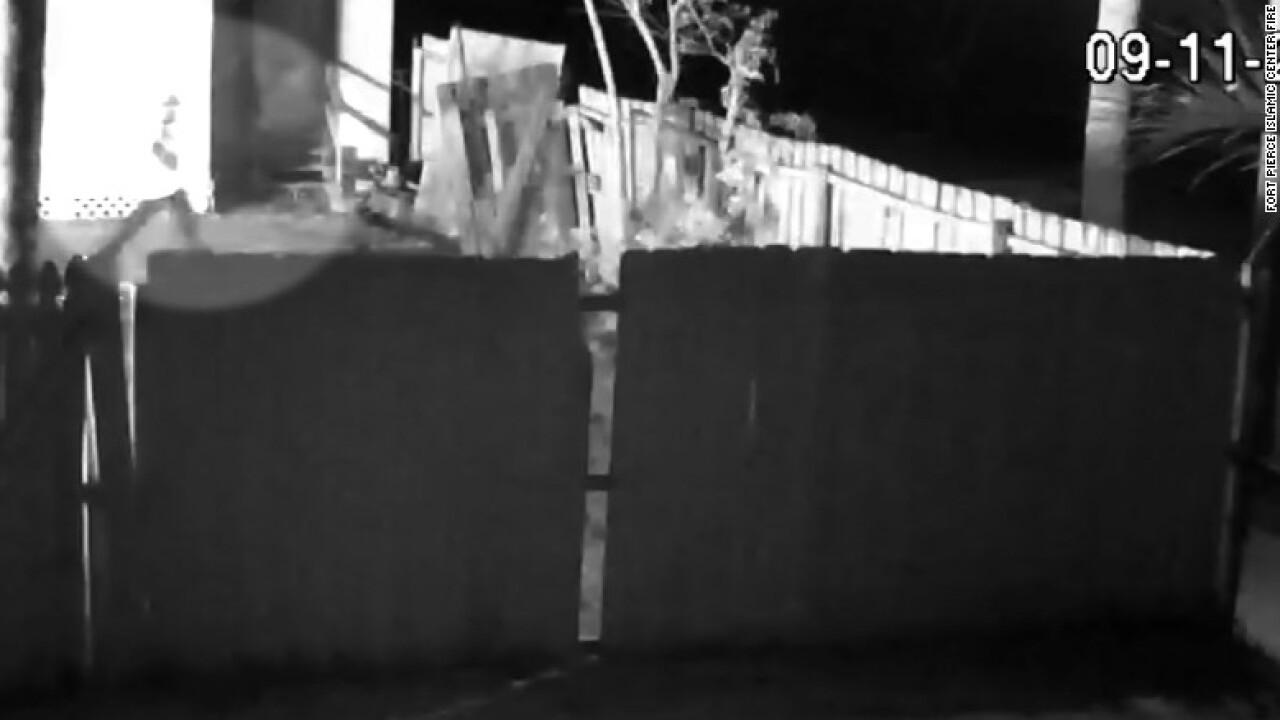 The surveillance video clearly shows a man approaching the mosque. Police say he was carrying paper and a bottle of liquid. Then came the flash.

The fire at the Florida mosque where Pulse nightclub shooter Omar Mateen had prayed is the latest occurrence in the rise in attacks against Muslims nationwide.

Preliminary data from the Council on American-Islamic Relations indicates that 2016 is on track to be the second-worst year on record when it comes to mosque attacks. This year is barely trailing the record set last year: 78 mosques were attacked in 2015.

“A fire at any place of worship is alarming, regardless of the circumstances,” the sheriff’s office said.

Was this arson or a hate crime?

The mosque now known as the place where Omar Mateen prayed may have been targeted on the anniversary of 9/11. But Mateen’s actions gained their own notoriety. In June, Mateen killed 49 people at the Orlando nightclub in the deadliest mass shooting in U.S. history.

The key question authorities are wrestling with is whether the Fort Pierce mosque fire, initially ruled as arson, could be considered a hate crime.

“I don’t want to speculate on a motive. We all know the implications of the date and the time of year that this is, the 9/11 anniversary. Is that related? I would not want to speculate but certainly that is in the back of our minds,” St Lucie County Sheriff’s Office Maj. David Thompson said.

Though firefighters extinguished this blaze, civil rights groups believe anti-Islamic attacks have been picking up speed across the country.

“This time another mosque has been targeted in a crime that could have easily taken the life of any worshiper. Only one hour prior to the fire the building was occupied. Our prayers are with the Fort Pierce Islamic Center community for all the difficulties they have endured this year,” CAIR-Florida said.

After dusk, ahead of the second major holiday in Islam, Eid al-Adha, also known as the Festival of the Sacrifice, another mosque was attacked, this time in New Hampshire.

Rocks were thrown through the mosque windows while worshipers were inside on Sunday, CAIR said.

“In light of the hostile political climate impacting the American Muslim community, and because of the spike in hate crimes and threats targeting Muslims and their institutions, we urge federal law enforcement authorities to add their resources to the investigation to help bring the perpetrators to justice and to establish a motive for this disturbing crime,” CAIR Maryland Outreach Manager Dr. Zainab Chaudry said in a statement released after the Laurel incident.

Even in places without attacks, there has been strident opposition to building mosques.

For months, efforts to construct a mosque and a 135-acre cemetery in Newton County, Georgia, just east of Atlanta, faced resistance and criticism from local lawmakers and citizens.

Between 2009 and 2015, CAIR found that what it deemed Islamophobia interfered with at least 40 zoning proposals for mosques.

CAIR started keeping tabs on such incidents at the end of the last decade.

In a report released in December 2015, the group also found an increase in incidents targeting mosques — including vandalism, harassment and intimidation.

In New York, two Muslim women were allegedly attacked while pushing their babies in strollers last Thursday. According to court documents, Emirjeta Xhelili, 32, tried to rip the Islamic head scarves, or hijabs, from the women’s heads while punching and kicking them.

Xhelili struck the women in the face and body, and repeatedly shouted, “this is the United States of America, you’re not supposed to be different from us,” court documents say.

The Brooklyn District Attorney’s office described the incident as a hate crime during the arraignment last week. Xhelili is being held on $50,000 bail and will be in court again on Wednesday.

“We have seen an unprecedented rise in both anti-Muslim rhetoric and resulting rise in anti- Muslim hate crimes and incidents in our society,” said Ibrahim Hooper, CAIR’s national communications director.

The advocacy organization has noted a spike in anti-Muslim discrimination and hate crimes in recent months, attributing it at least in part to Islamophobic rhetoric used by various public figures.

“The 2016 presidential election has mainstreamed Islamophobia and resulted in a number of unconstitutional proposals targeting Muslims,” said Corey Saylor, director of CAIR’s Department to Monitor and Combat Islamophobia.

However, the report did suggest that some progress in “the reduced frequency and acceptability of anti-Islam law-enforcement trainings,” is being seen.

Though there is no easy fix, officials are encouraging more outreach efforts with Muslim communities.

“It requires a role for the public to play, too. Public awareness, public vigilance. ‘If you see something, say something’ is more than a slogan. It requires building bridges to American Muslim communities so we can help them help us,” Department of Homeland Security Secretary Jeh Johnson said on CNN’s “New Day” in June.