Frustrated UR students walk out of meeting about campus sexual assault 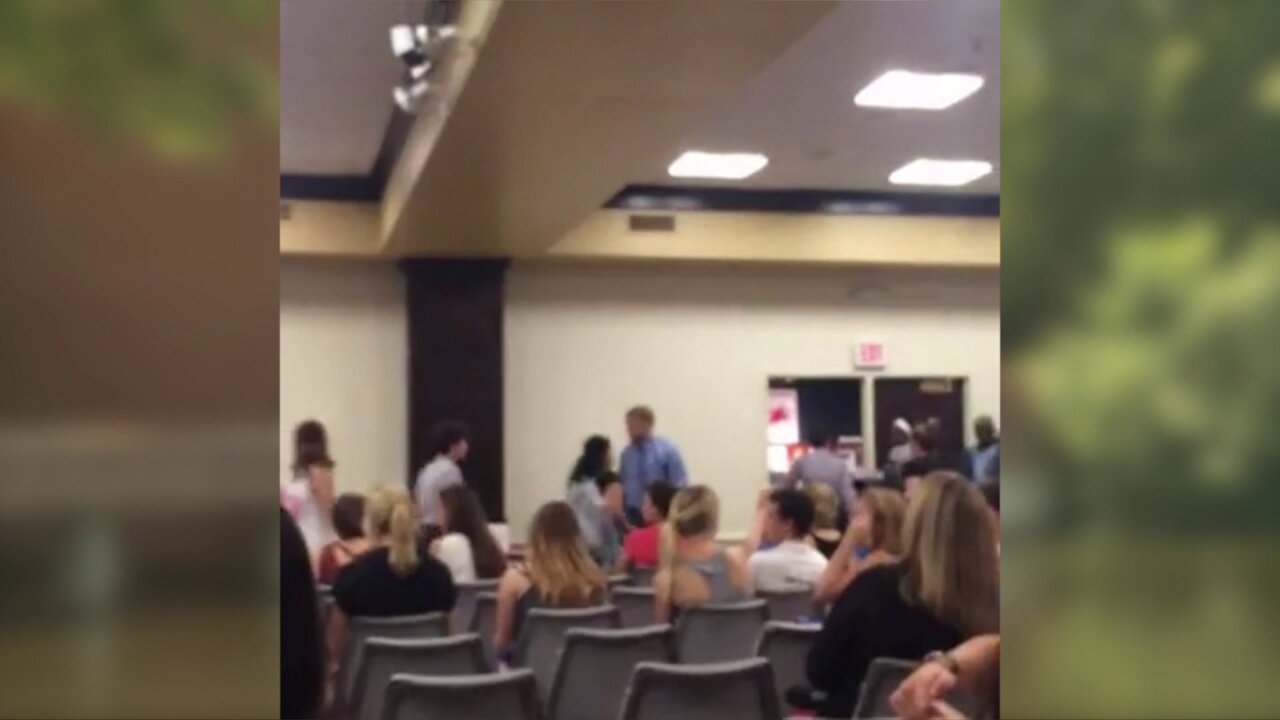 Students leave UR meeting, frustrated by lack of dialogue.

HENRICO, Va. – Two women this week have alleged University of Richmond mishandled their sexual assault cases, and the tension was palpable at a campus meeting when students walked out over a lack of dialogue with administrators.

On Tuesday, Cecilia Carreras first wrote about the alleged assault in the Huffington Post, in which she said the assault happened at an off-campus house in summer 2015.

On Friday, student Whitney Ralston also made similar claims that university police and administrators didn't do enough to address the crime after she was allegedly assaulted.

She said she was the unnamed woman whom Carreras had written about. Ralston alleges that she was raped, robbed and abused by a student who also stalked her.

Ralston said she “realized in later meetings that the school had no real intention of helping me.”

Carreras first published with the proclaimed intent to highlight common cases like the Stanford swimmer, Brock Turner, who was found guilty of rape and who served a half of a six-month sentence for the felony.

“I share with you that Spider Athletics has its own Brock Turner- and there’s no denying it,” she wrote.

“Because the reality is, there are Brock Turners in all of our lives and it’s how we respond when it’s hard; when we’re friends with that Brock Turner, that determines the kind of person we are,” Carreras wrote.

The university responded to her allegations, did not deny that the rape occurred, but said that “many of the assertions of fact are inaccurate.” [You can read their entire statement here]

The next day, ahead of the campus meeting, Carreras posted receipts of her conversation with administrators, intended to show that “the Richmond administration did what it had to do to protect” her alleged rapist.

She produced screenshots of emails, text messages and file names from audio recordings taken during a reported 10-hour hearing.

In July 2016, her alleged rapist was put on “restricted access” but still allowed to compete on an athletic team.

For Carreras, her case, and other rape statistics reported in 2015 by the UR on-campus newspaper, the Collegian, indicate that she’s not the only victim at “Richmond who still goes to school with her rapist.”

She feels as though school officials “justified and excused the assaults.”

Hundreds of concerned students reinforced her frustration at a packed campus meeting Thursday night, titled "It Ends Now: A Culture of Shared Responsibility."

University representatives attempted to assuage student concerns and reinforce the message that sexual assault education is a top priority on campus.

Student Meredith Scroggin, a junior at UR who shot video of the meeting, said it did not take long for students to grow anxious and upset.

“I think the university should do a better job of if someone has questions, to have public answers,” she said.

Students were upset that no questions would be taken in the room. Instead, a separate Q & A was to be held on a separate floor, afterward.

Everyone involved in the investigation and adjudication process of sexual assault cases "are people who only have an interest in doing the right thing," said Steve Bisese, VP of Student Development, in the video shared with CBS 6.

"Unfortunately, with these kinds of things, no matter what, there is somebody that is upset," he continued.

Students leave UR meeting, frustrated by lack of dialogue.

Several people walked out of the room at that point, and one woman stood up to speak.

"In all due respect, feeling bad about something and doing something about it is completely different," shouted out a male student.

"Why is he still at our school?" said another woman.

Many students wanted more specifics from the university, and for the alleged rapist to be punished appropriately. Students also grilled administrators over concerns that Carreras’ case was mishandled.

As result of what attendees felt was a “monologue” and not a dialogue, over 100 students left the room, with around 60 remaining.

“I think it made an impact, showing the administration that they weren't happy with what was being given,” Scroggin said.

“I was speechless...to be quite honest,” said student Shira Smillie.

“This is not a new issue,” Smillie said. “Now we just have faces to put with the issues. I'm interested to see what's going to come of this.”

Students said they just hope these situations won't deter any other victim from reporting a rape.

“I think that for those individuals, unfortunately the school's decision impacted their healing process and their sense of justice....so unfortunate,” Smillie said.

CBS 6 reached out to the University of Richmond but they did not respond with a comment.

A second meeting was to take place on Friday, and is being livestreamed on the student paper website.

Meeting with @urichmond students so packed they're now moving to another room @CBS6 pic.twitter.com/ptFK3lo6ZY