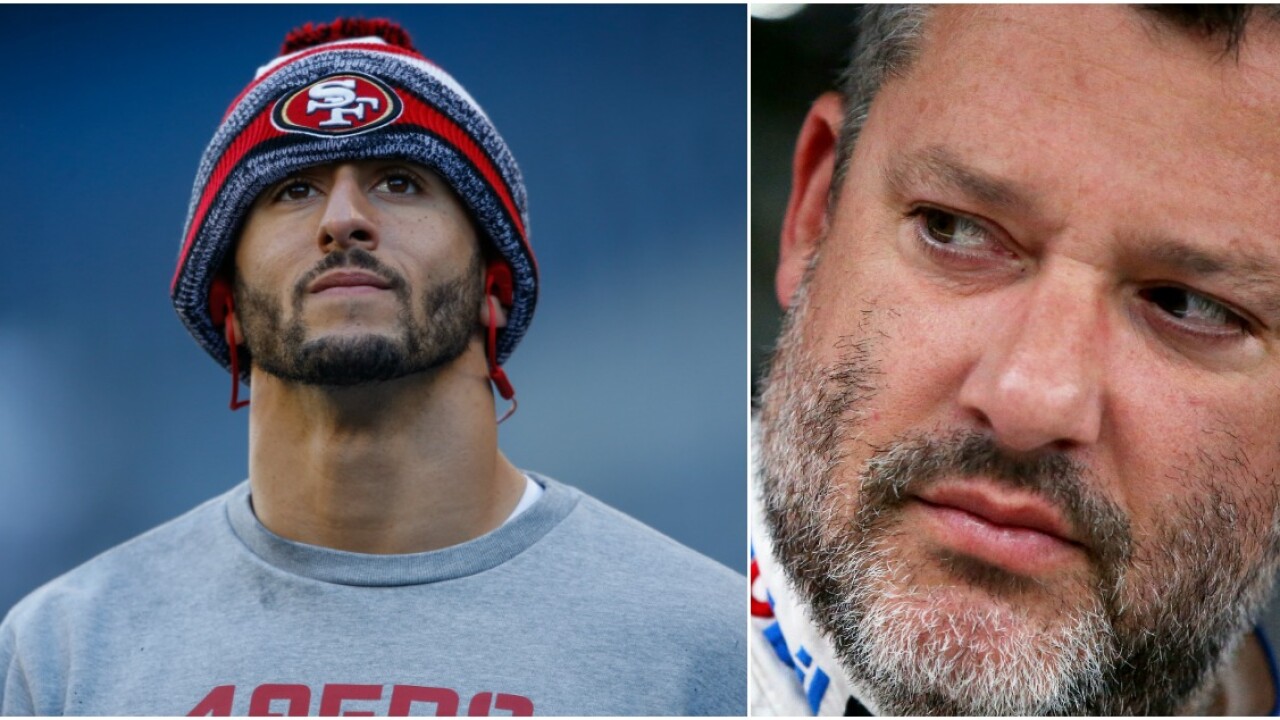 Add Tony Stewart to the chorus of sports figures weighing in on Colin Kaepernick, who recently sat in protest during the national anthem during an NFL preseason game.

Taking to Twitter on Monday, Stewart — who was one of many to share his views on the San Francisco 49ers quarterback — said, “I’m sorry but (Kaepernick) needs to learn the fact about police before running his (expletive) mouth! He has no clue what they go thru!” Stewart completed his tweet with a hashtag and the word “idiot.”

But Twitter users fired back at Stewart, referencing when he struck and killed 20-year-old sprint cup driver Kevin Ward, Jr., during a dirt track race in Canandaigua, New York in 2014. The Ontario County (New York) District Attorney later announced that a grand jury found no reason to charge Stewart in connection with Ward’s death.

Stewart fired back, calling one user an “idiot” as well.

“All lives matter,” Rice tweeted. “So much going on in this world today. Can we all just get along! Colin, I respect your stance but don’t disrespect the Flag.”

Kaepernick’s former head coach, Jim Harbaugh, also spoke out Monday, saying at a Michigan football news conference, “I acknowledge his right to do that, but I don’t respect the motivation or the action.”

Later, the Wolverines head coach went on Twitter to clarify his remarks.

“I apologize for misspeaking my true sentiments,” he said. “To clarify, I support Colin’s motivation. It’s his method of action that I take exception to.”

Not all reactions to Kaepernick’s protest are negative.

In an op-ed for the Washington Post, Kareem Abdul-Jabbar referenced US pole vaulter Sam Kendricks, who was on his way down the runway at the Rio Olympics. When he heard the national anthem playing, Kendricks, who is a 2nd lieutenant in the Army Reserve, stopped running, put down his pole and stood at attention. He widely was lauded for his nationalism.

But what Kaepernick did, Abdul-Jabbar wrote, is also a sign of patriotism.

“In truth, both men, in their own ways, behaved in a highly patriotic manner that should make all Americans proud,” Abdul-Jabbar said.

Abdul-Jabbar goes noted that Kaepernick’s stance could negatively impact his career and could potentially cost him millions in endorsements. There’s also a chance Kaepernick could be cut from the 49ers, though if that happens, it could be for football reasons rather than social or political ones.

“What should horrify Americans is not Kaepernick’s choice to remain seated during the national anthem, but that nearly 50 years after Ali was banned from boxing for his stance and Tommie Smith and John Carlos’s raised fists caused public ostracization and numerous death threats, we still need to call attention to the same racial inequities,” Abdul-Jabbar said. “Failure to fix this problem is what’s really un-American here.”

Like Abdul-Jabbar, Jim Brown is no stranger to social activism. He founded the Negro Industrial and Economic Union (later renamed the Black Economic Union) to support black entrepreneurship in the 1960s, as well as the Amer-I-Can program in 1988, an organization dedicated to stopping gang violence and helping individuals “take charge of their lives and achieve their full potential.”

The former Cleveland Browns running back and Hall of Famer, appearing on NFL Network’s “NFL Total Access,” agrees with Kaepernick’s sentiment, though perhaps not the method.

“I listened to him and he makes all the sense in the world,” Brown said. “He’s within his rights and he’s telling the truth as he sees it. I am with him 100 percent. … Now if you ask me ‘Would I do that?’ No I won’t, because I see it a little differently. I’m an American citizen, I pay my taxes, I want my equal rights but this is my country, and consequently I don’t want to open up for ISIS or anybody that will take away what we’ve already gained.”

Richard Sherman: The ‘focus has shifted away from his message’

Seahawks cornerback Richard Sherman, who previously has spoken out about social issues, explained his views on what Kaepernick did.

“You can’t ever stand against the flag,” Sherman said. “A lot of people have sacrificed for it, but there is also a deeper meaning to what he did. He’s talking about the oppression of African-Americans in this country, and that has been going on for a long time. I think a lot of the focus has shifted away from his message. … I think there’s also things in this nation that people need to remember and take heed of and also acknowledge.

“There are certain statistics that are put out there to make sure that police profile certain people in certain neighborhoods, and that needs to change. So there is some depth and some truth to what he’s doing.

“I think he could have picked a better platform and a better way to do it, but every day they say athletes are so robotic and do everything by the book. And then when somebody takes a stand like that, he gets his head chopped off.”