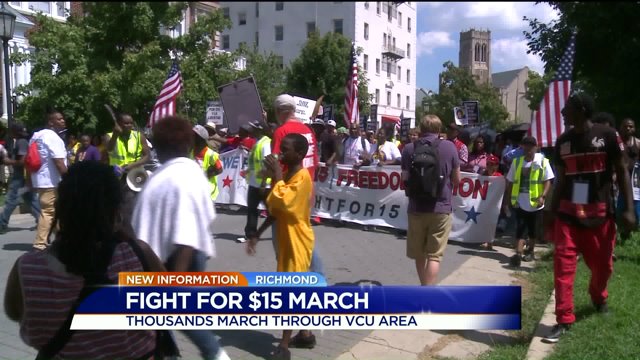 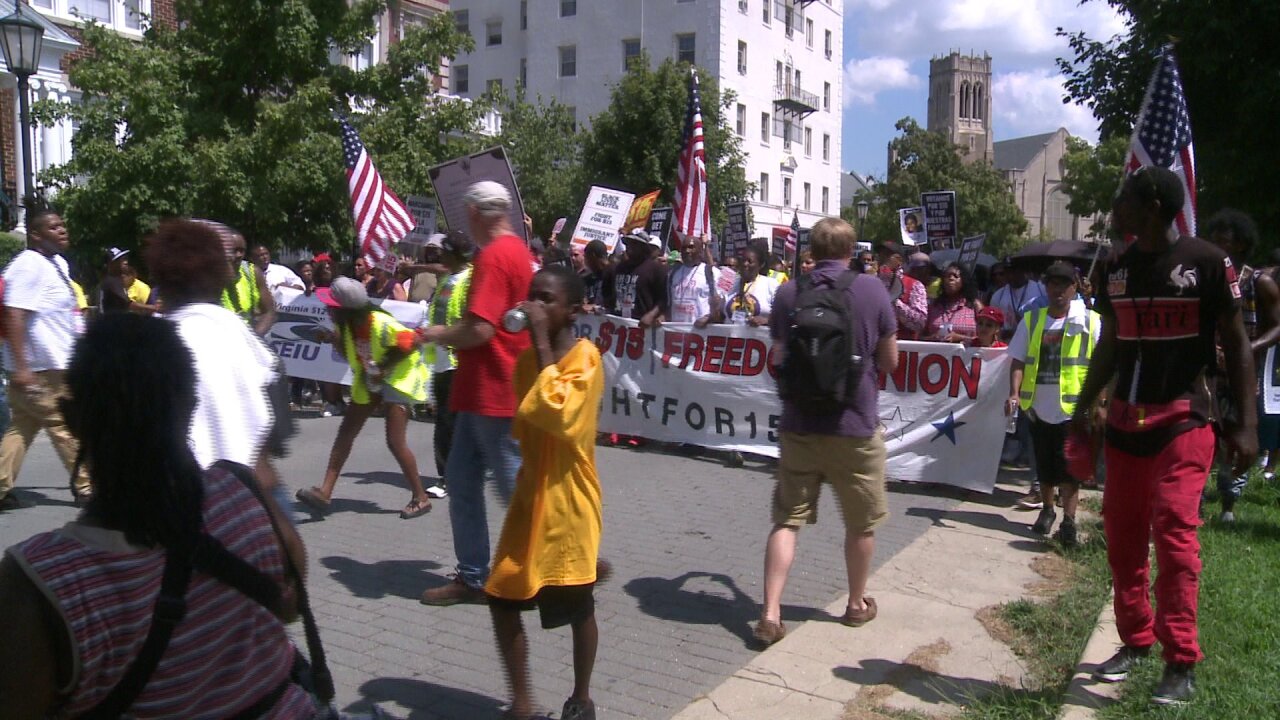 RICHMOND, Va. -- More than 8,000 people marched down Monument Avenue Saturday afternoon as the "Fight for 15" convention came to a close.

Leaders of the national movement said they selected Richmond because it was the capital of the Confederacy and displays "the enduring effects of racist policies that are holding back low=paid workers of color today.”

Marvette Hodge, a homecare worker in Richmond, said she knows the struggle of working hard and not making enough money to support her family.

"Me and my children were homeless in 2009, we were homeless for a couple of years,” she said. "Only making  $9 an hour or coming from other jobs where I've been paid less than that, it's hard to pay your rent. Coming from a mother who's been homeless before in trying my best to avoid that from happening again with me and my family."

She was one of thousands taking part in the fight to raise the minimum wage to $15.

"In today's economy, it is unbelievable to try to live on $8.50 an hour. There's no way you can fill your refrigerator, pay your electricity, pay your rent,” said Dawn O'Neal, a childcare worker.

Organizers said the "Fight for 15" movement has expanded to include more than fast-food workers. People at the convention work in 20 different industries -- including hair salons, cellphone companies, truck companies and universities.

"We want family and friends and neighbors to hear us. We want them to join us and turn out a vote. We want our elected officials to understand they need to stand with working people and we need corporations to come to the table and bargain with fast food workers and retail workers to change this country once and for all,” SEIU International President Mary Kay Henry said.

The group has gotten major support from civil right activists like Rev William Barber, the president of North Carolina’s NAACP. He spoke at the end of the march.

"In America, race and class have to be understood. They go together. Racial discrimination has created economic injustice,” Barber said.

Rev. Barber said this movement is about marching in solidarity…to increase pay for everyone.

"Dr. King said when we lift the poor, we lift everybody. Too often in the south, there's been a strategy to play poor whites against blacks and against Latinos. What we're doing is coming together to say that won't work anymore,” he said.

But some economists and business owners maintain raising the minimum wage to $15  would hurt small business.

"By raising that burden on a small business owner, you're increasing their labor costs and they have to figure out, ‘How do I absorb that cost?” Nicole Riley, the Virginia Director for the Federation of Independent Business, said

The increase could mean raising prices for customers, cutting hours for employees or even moving toward automation to replace employees.

"To see other people in the same category as I am, and to know that there are 300 or 400 other women like me, it does something to me. It opens my heart to know I'm not the only one that's fighting for the same thing,” said Hodge.

The group created a resolution to keep the "Fight for 15" movement moving forward. Participants plan on having a National Day of Action on Sept. 12.