Pope on priest killing: World is at war, but it’s not a religious one 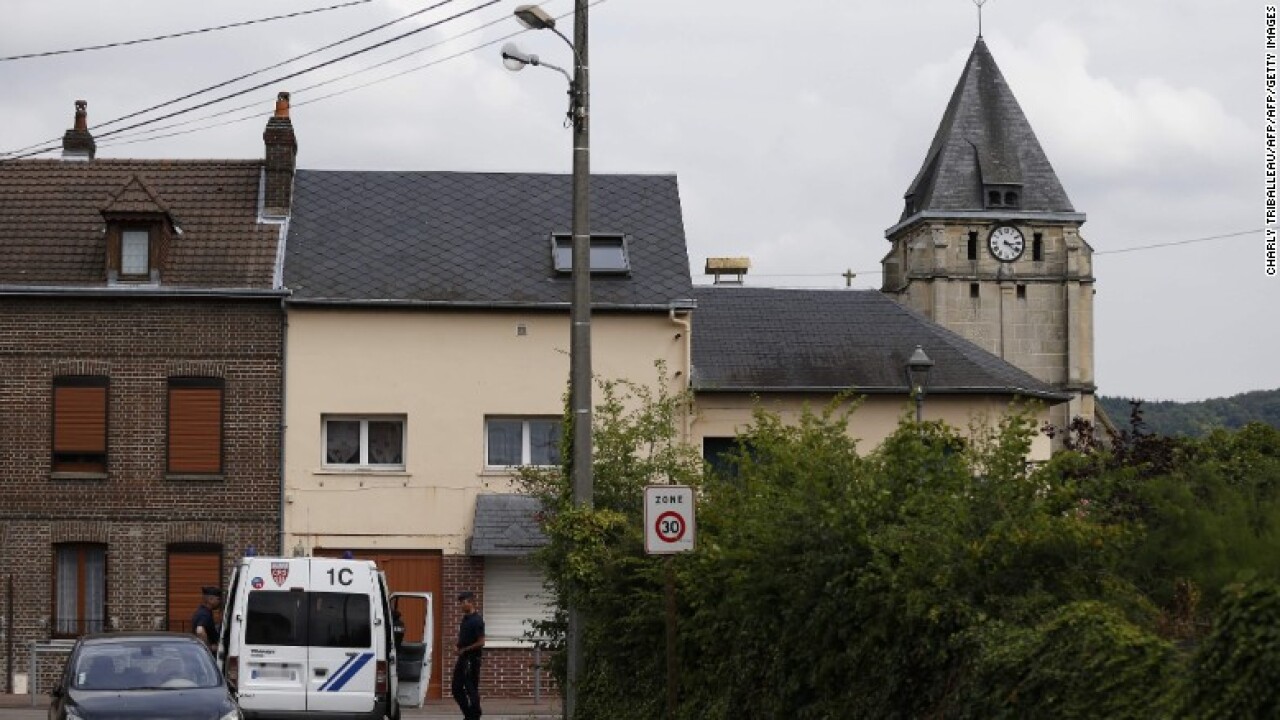 ST.-ETIENNE-DU-ROUVRAY, France — Pope Francis said Wednesday that “the world is at war” as he addressed the slaying of a Catholic priest by radical Islamists in France, but he stressed it was not a war of religion.

Speaking on the papal plane en route to Krakow, Poland, for World Youth Day celebrations, Francis said the world had been in “a piecemeal war” for some time.

He said Tuesday’s killing of the Rev. Jacques Hamel, 86, in St.-Etienne-du-Rouvray, France, was one casualty in this conflict.

“The world is at war because it has lost peace,” he said.

“Some might think it is war of religion. It is not. All religions want peace. Others want war.”

The killing of the priest — by two attackers who struck in the name of ISIS — is the latest terror atrocity to roil Europe in recent weeks.

Coming less than two weeks after the Bastille Day terror attack that left 84 people dead in Nice, France, the brutal slaying has fueled public anger and highlighted apparent shortcomings in the French government’s ability to respond to the domestic jihadist threat.

One attacker, Adel Kermiche, had been flagged as a radicalized Islamist and was under house arrest at the time of the attack, Paris prosecutor Francois Molins said.

The 19-year-old was forced to wear an electronic monitoring tag after he traveled abroad to try to fight in Syria. Under the conditions of his house arrest, he was allowed out of his parent’s home, not far from the church, for four hours each day — a window he used to carry out the attack.

French authorities have struggled to monitor thousands of domestic Islamic radicals who, like Kermiche, are on a list used to flag radicalized individuals considered a threat to national security.

‘We must fight the terrorists’

In St.-Etienne-du-Rouvray, a small town of about 27,000 people in France’s Normandy region, the reaction Wednesday was one of horror and disbelief.

“You can’t imagine that someone would do something like this. It is unimaginable, especially in a church, it’s terrifying, absolutely horrific,” said Philippe Payen, 70.

Meggy Simane, 23, said the jihadist threat was “a problem for everyone: the gay community …, the Jewish communities, for all walks of life.”

Alexandre Herbert, 35, who lives in a nearby village and has aunts in the town, said the French “must not be afraid.”

“We must fight the terrorists. These people are crazy — they justify their actions with religion, but religion has nothing to do with it.”

Hava Balikci, 29, a half-Kurdish woman who lives in a nearby village, said governments around the world need to take more action against ISIS.

“What we are already doing is not enough; we have to find other solutions to avoid future youth doing this,” she said.

The French government said it will mobilize police and military forces to boost security in the wake of the attack.

Speaking at a press conference, French Interior Minister Bernard Cazeneuve said that 23,500 police and military officers — including reserves — would be mobilized to ensure the safe running of 56 public events scheduled for the rest of the summer.

The events may be called off if the government determines that security arrangements are inadequate, he said.

Cazeneuve said France’s reservist forces would be boosted. He said 2,500 people had expressed interest in joining the reserves since he called on youths to sign up in the wake of the Bastille Day attack in Nice.

Lawmaker Marion Marechal-Le Pen, 26, tweeted she had decided to join the military reserves in response to the threat and invited “all young patriots to do the same.” Marechal-Le Pen is a member of the French Parliament from the far-right National Front party and also the niece of the party’s president, Marine Le Pen.

Cazeneuve said that information sharing between security services needed to be improved and that the response to the threat needed to remain within the law.

“Only in this way can we win the war against terror,” he said.

Cannes Mayor David Lisnard announced the French Riviera city had passed a bylaw banning people from carrying suitcases and large luggage — that could be used to conceal bombs — on public transport or along the beachfront until the end of October.

French President Francois Hollande met with religious leaders Wednesday before attending a remembrance Mass at Notre Dame Cathedral in Paris for the victims of the attack.

Speaking after the meeting with Hollande at the Elysee Palace, Dalil Boubakeur, rector of the Grand Mosque of Paris, expressed “deep grief” on behalf of France’s Muslims.

He said the killing of a priest — “who is respected and protected to the letter in our religion” — was “a deed outside of Islam, a deed that all Muslims of France condemn and reject in the most definitive way.”

A government spokesman vowed the republic would “respond with unity” to the ISIS threat, which has led to a state of emergency being in place since the Paris terror attacks in November.

“It is with the weapons of the republic that we will fight and protect,” government spokesman Stephane Le Foll said.

Witness: ‘They forced him to kneel’

The standoff at about 9.25 a.m. Tuesday began when the attackers, both carrying bladed weapons, entered the church as morning Mass was underway, taking the priest, three nuns and two parishioners hostage, Molins said.

Sister Daniele Delafosse said she was able to escape the attack, according to CNN affiliate France 2.

Before fleeing, she witnessed the perpetrators gather around the church altar and perform some sort of religious oration in Arabic before forcing Hamel to his knees and placing a knife to his neck, she said.

“He was still in his robes, he was at the foot of the altar; they forced him to kneel and then not to move,” she said.

“I do not know what they said to us but, ‘you Christians, we will eliminate you’ — it was sort of this style of conversation, which they shouted a bit.”

The priest “tried to fight … but, well, he is 86 years old,” she said, describing the attack as “cowardly.”

The priest was killed when the attackers stabbed him in the chest and slit his throat, officials said. They also seriously wounded a churchgoer.

Police could not enter the building sooner because of the hostage situation, Molins said. One of the killers wore a fake explosive belt, and the other carried a kitchen timer and fake bomb, he said.

One of them shouted, “Allahu Akbar” — Arabic for “God is the greatest” — as they left the church and were killed.

Kermiche was identified by his fingerprints, while the other attacker has not been named.

Hollande said Tuesday that the attackers acted in the name of ISIS, and the ISIS-linked news agency Amaq released a statement, posted by the group’s supporters, claiming the Normandy attackers were the terror outfit’s “soldiers.”

CNN cannot independently confirm the claim, and no evidence has surfaced showing ISIS had been in direct contact with the attackers.

According to a French intelligence source, Kermiche tried to enter Syria twice after becoming radicalized following the 2015 Charlie Hebdo attack in Paris. The attacker was associated with Maxime Hauchard, a French jihadi who appeared in an ISIS beheading video in 2014, the source said.

Molins said Kermiche attempted to leave the country twice for Syria in 2015.

He was placed under “judicial control” in March 2015 after trying to use his brother’s identification to go to Syria. Two months later he left the country for Syria using a cousin’s identification card.

Authorities in Turkey stopped Kermiche and deported him to France via Switzerland, from where he had entered Turkey.

He was detained until March 18 when he was released under house arrest with an electronic monitoring tag. An appeals court upheld the terms of his release, which required him to live with his family under house arrest and sign in once a week at a local police station.