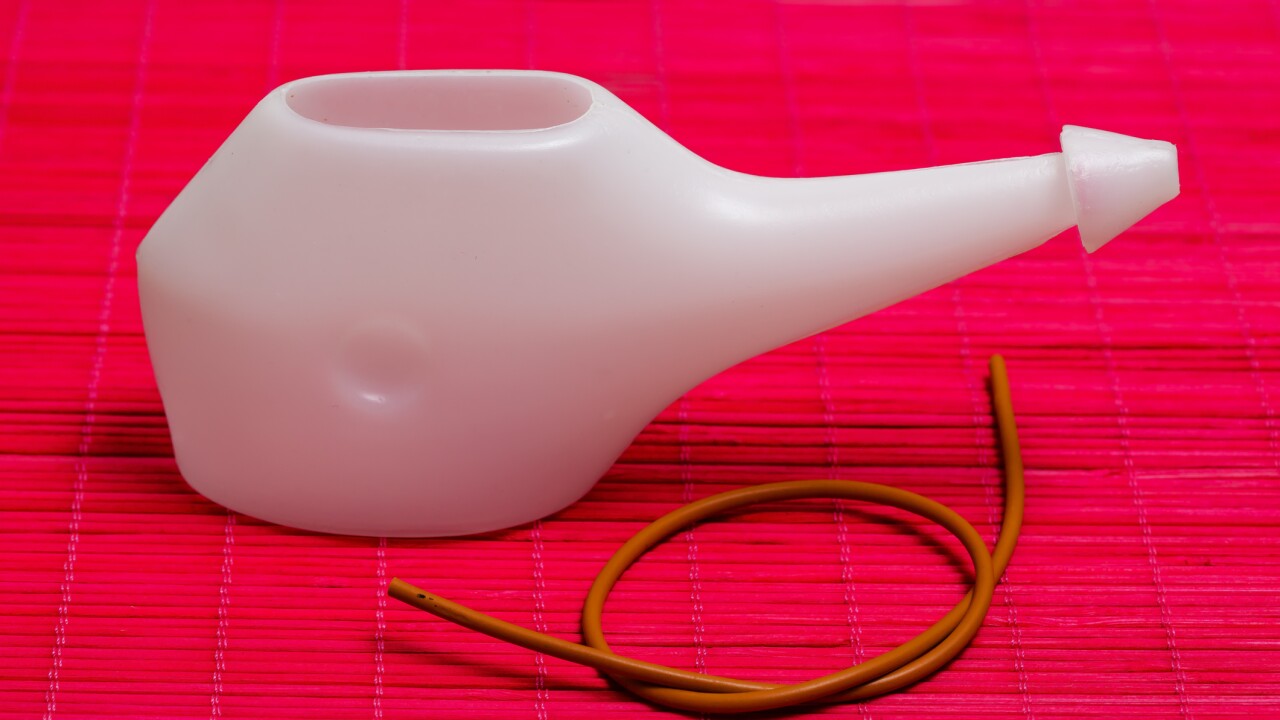 Using a neti pot with a salt solution can eliminate some symptoms of chronic sinusitis, new research found. In fact, the study published in the Canadian Medical Association Journal showed patients who used this old-school technique were able to maintain positive results over a six month period.

“In addition to improving sinus symptoms, headaches were reduced, there was less use of over-the-counter remedies, and people also said they were less likely to contact the doctor again for a future attack of sinusitis,” Dr. Paul Little, lead author and a professor of medicine at the University of Southampton, said in an email.

“The benefit of saline is the removal of mucus and inflammatory products in the nose and only true ‘irrigation’ brings this about — thus simple [nose] sprays and inhalations are ineffective,” explained Dr. Richard J. Harvey, a professor of rhinology at Macquarie University who was not involved in the study. “Higher volume neti pots and even moreso the higher volume and positive pressure squeeze bottles are more effective.”

‘A very difficult disease to treat’

Sinus problems seem relatively minor in the scheme of things, yet symptoms may be anything but. Patients who suffer from recurrent sinus infections complain of facial pain or pressure, nasal blockage and discharge, dental pain, ear pressure, fever, headaches and fatigue.

“Chronic sinusitis is a very difficult disease to treat,” said Dr. Dan Merenstein, associate professor of family medicine at Georgetown University Medical Center, adding that it requires treatments other than those used for acute — rare or one-time occurrences of — sinusitis.

About 25 million Americans and nearly 2.5 million Canadians suffer with chronic sinusitis, according to Little and his colleagues. Symptoms can be so uncomfortable and painful, patients report a similar quality of life as people suffering from congestive heart disease.

Yet, most people are not fans of neti pots, which involve pouring liquid directly into each of your nostrils. Still, neti pot users often recommend this home remedy along with another low-tech option: inhaling steam. However, occasional problems, such as minor scalds, occur with steam treatments.

Meanwhile, faced with a patient suffering from blocked nasal passages, many doctors reflexively prescribe antibiotics. In fact, one recent study found chronic sinusitis (rhinosinusitis) is the fifth most common diagnosis for which antibiotics are prescribed in the United States.

Little suspects some patients do want to be handed a prescription, still doctors may also be over-estimating peoples’ expectations for these drugs.

“Unfortunately since antibiotics have been, and still are, very liberally used for sinusitis in most countries, this greatly increases belief in the effectiveness of antibiotics,” said Little, “since people attribute their recovery not to the natural history of sinusitis but to the antibiotic.”

This is a problem. After all, reducing or at least containing antibiotic resistance has become a global priority, which demands doctors write fewer prescriptions for these drugs. The current study, then, investigated whether non-pharmacy treatments might work as well as prescription treatments for patients with recurrent symptoms of sinusitis.

To measure the benefits, patients ranked their symptoms. The researchers followed up with patients at three and six months and about three-quarters of the 871 total participants reported scores.

At three months, patients’ symptoms decreased more with nasal irrigation than without it. By six months, significantly more patients using the neti pot maintained a 10-point improvement in symptoms (44.1% v. 36.6%) and fewer used over-the-counter medications (59.4% v. 68.0%). The number of participants reporting problems, such as nose bleeds, was the same in both groups.

While steam inhalation reduced headaches, it had no significant effect on other symptoms.

“I would certainly try nasal irrigation,” Little said when asked what he would advise patients with recurrent nasal infections. “Most people in our study found it helpful.” While the results did not show steam inhalation to be helpful, he believes it may be possible a more intensive regimen might have worked. (The study recommended doing it only once a day for at least five minutes.)

The take away here, Merenstein said, is that sinus irrigation is “a very cheap, easy to use” intervention with rare side effects. “It should be used as standard of care in chronic sinusitis and researched in acute sinusitis.”