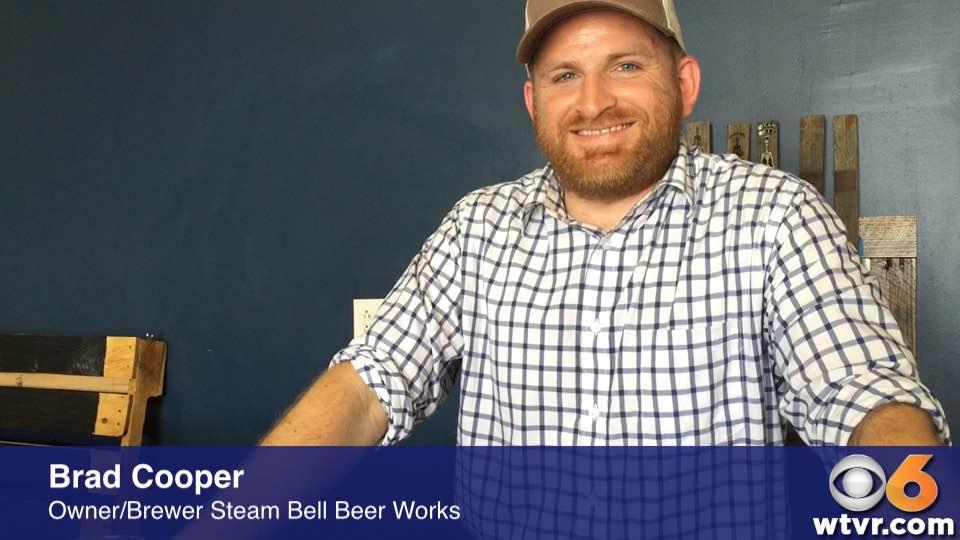 Steam Bell Beer Works opens on June 11 and will tap 10 beers over the weekend. 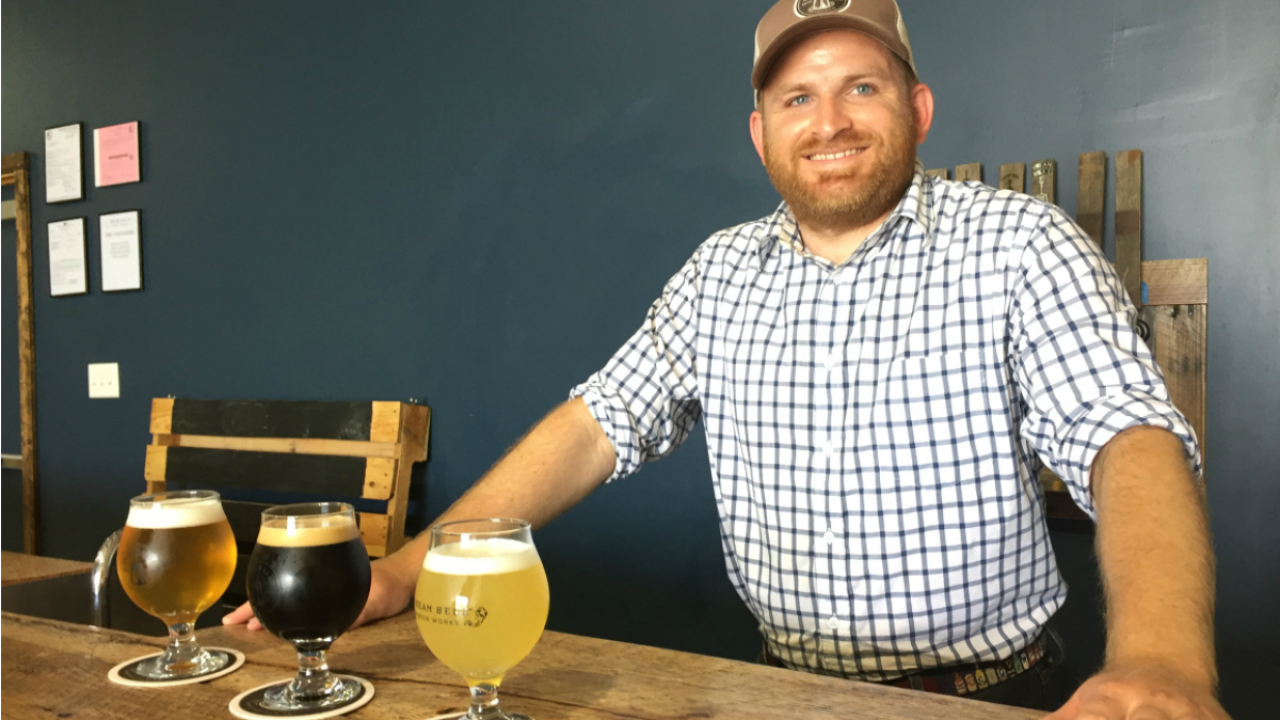 CHESTERFIELD COUNTY, Va. – Beer was precisely the reason that Steam Bell Beer Works owner Brad Cooper was fired from his aggregate mining job, but he refers to Sept. 19, 2014 as “Freedom Day.”

A coworker was supposed to take the gifted growler of Cooper’s homebrew out to his car, but he violated the company’s zero-alcohol at work policy and put it in the refrigerator -- then he pointed the finger at Cooper when questioned.

Well, now Cooper is his own boss -- and has a staff of five people.

“I was sitting at the edge of the pool and someone pushed me in,” Cooper said, sitting at a handmade table in the taproom just days before Chesterfield’s first standalone brewery opens.

Even before that fateful day, it seems Cooper was destined for the gig. Not only does his family talk about how he gravitated toward science in school, but his staff calls him a wizard when it comes to brewing. Cooper started home brewing in 2009, when he was 22.

“I’m about as unencumbered as I could possibly be,” Cooper said of that pivotal moment when he decided to parlay unemployment into a brewery.

So he moved in with his parents, sold his recently purchased, shiny new Toyota Tacoma (dual cab, tow package) and purchased a modest Toyota Highlander “with a dent in the side.”

Then his girlfriend left him.

“Thank God the dog is still with us or otherwise it would be a sad country song,” Cooper said with a laugh.

The future seemed to be hidden right there in plain sight all along --in his surname. Traditionally, a cooper’s work included assembly of casks and barrels. A steam bell is used to cover a barrel and helps ply the wood into shape.

Cooper scouted potential sites all around Virginia, but decided on Chesterfield – the community where he grew up.

“I had built my friendships and community in Central Virginia,” said the 2005 Manchester grad.

He ultimately settled on a 6,000 square-foot building in an industrial part of Chesterfield that also has a focus on entertainment. Unlike in Richmond, there is only one other brewer around -- Extra Billy's restaurant also brews award-winning beer.

There are over 100,000 people in a five-mile radius, Cooper said. And one of the fastest growing demographics, he said, are people in their late 20s or early 30s who have recently gotten married, bought a house and are having a kid.

“Just because we are married, have a house and a kid on the way doesn’t mean we don’t want to have fun,” Cooper explained.

The brewery itself is a family affair. His father Tom worked on numerous construction details around the building, his mother Connie manages the office, and his sister Brittany is here for two months to help out -- while she works remotely for IBM in New York City.

Most of Steam Bell’s investors are parents of friends Cooper had growing up. They don’t know a lot about craft beer but they know him.

“They are investing in me,” Cooper said, “because they know I won’t sleep until it works.”

“A rising tide lifts all boats”

Virginia is a leader in the nationwide craft beer boom, and was one of four states where over 20 breweries opened in 2015; this year there will be even more.

Cooper is quick to thank the beer community for their help. He took his staff on a field trip of some local breweries recently, stopping by to show support for Castleberg Brewery on their opening day.

His sister talks about the collaborative effort seen among brewers.

“A rising tide raises all ships,” she said – a sentiment echoed among brewery staff at almost every interview I’ve done.

Cooper will be brewing on a 10-barrel (310 gallons) system that is off to the right of the taproom.

“My background is in advertising, and my instinct when he talks to me about the Richmond scene, is to think ‘that doesn’t makes sense,’” his sister Brittany said. “It’s restored some faith in humanity to see how these folks have helped each other.”

Cooper, who has signed with Brown distributing, is brewing on a 10-barrel (310 gallons) system. It’s larger than many of the systems at new breweries, but Cooper said he took advice from Triple Crossing to “plan for more.”

He’s not worried about the double-digit boom of breweries.

“Everyone has their niches that they are excelling in,” he said.

Cooper will embrace a farmhouse style integrating local flavors and ingredients and plans to release 10 beers on opening weekend.

Time is Money is a juicy, farmhouse IPA with adjunct grains and flaked oats, restrained on bitterness, and has four hops.

Grisette is a light-bodied, summertime saison, with a little over 5% alcohol. It has pilsner malt, flaked oats and rye malt. It is bittered with East Kent Golding hops -- a real earthy, dry, spicy hops-- and finished with the citrusy and floral Mandarina Bavaria hops. The Grisette, a style of beer similar to the saison, was the beer of the miners. Gris is the French word for the color grey- the color of the stone mined in the area.

Left to right. The Liège, Tiramisu Stout, and Grisette

The Tiramisu stout – which can only be found at Sergio’s Restaurant and Steam Bell – is a 9% imperial milk stout sweetened with lactose sugar and aged on vanilla beans, rum-soaked oak chips and coffee from Ironclad coffee.

There will be small batches of other beers. Cooper specialized in some funky, sour beers when homebrewing, and he loves to experiment like a chef – guided by science.

The Liege, a Belgian Tripel fermented with maple syrup and aged with whole vanilla beans, is an example of the smaller batches. At 8.6 ABV it is light, but not lightweight.  It is a beer take on the Belgian waffle, as Liege played a role in its origin.

The Patchronce, a grisette fermented over blackberries and raspberries, is a  collaboration with Blue Bee Cider. 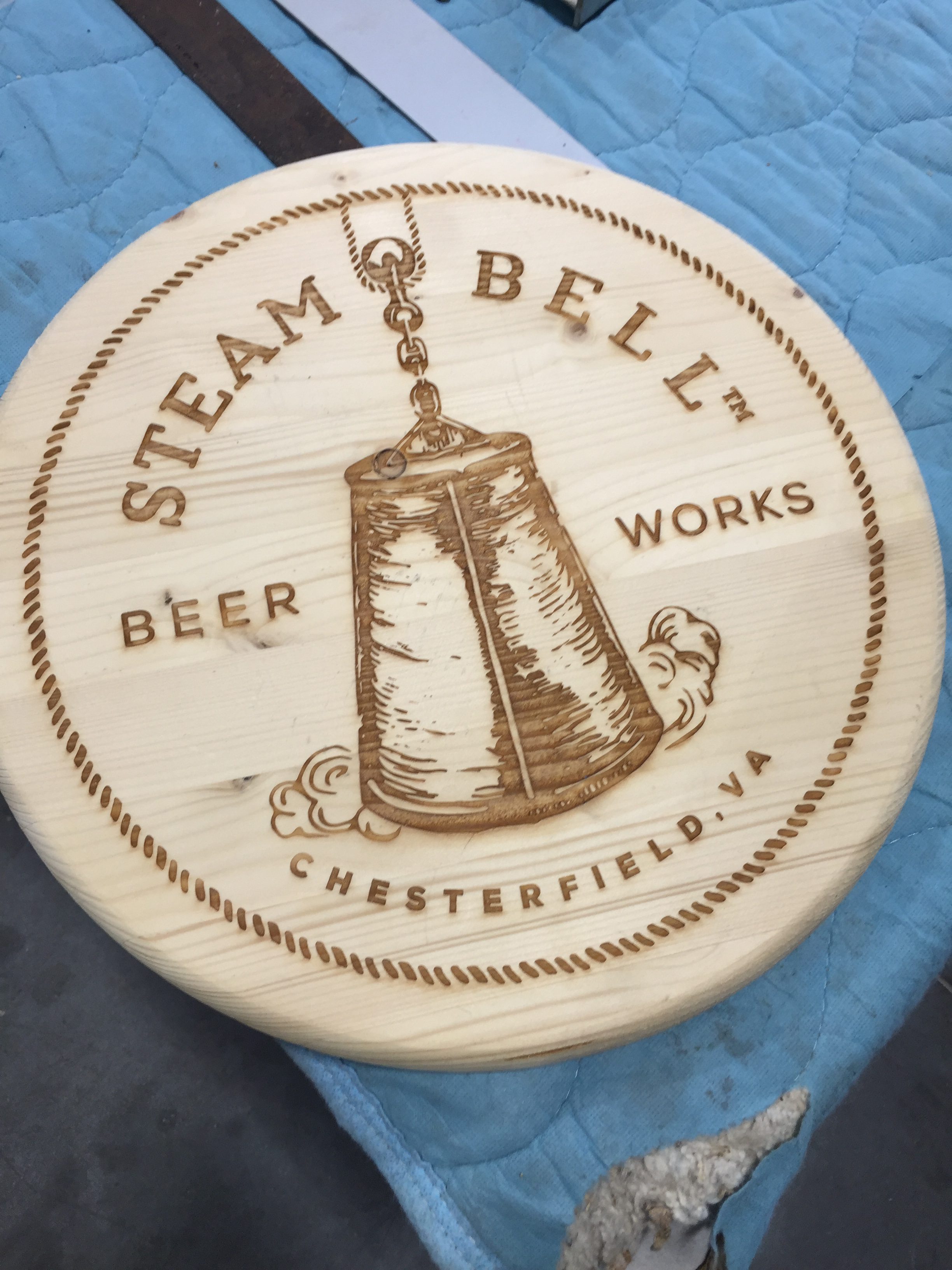 The team at Steam Bell, led by Cooper and tasting room manager Joey Johnson, has over 40 years combined of serving experience, and a tremendous passion for beer.

Unlike most tasting rooms, table service will be offered.

The brewery aims for a family-friendly vibe, and has the games on hand to prove it. Once the weekend hits and neighboring business close, Steam Bell lords over a sprawling expanse of pavement outside for cornhole, bands, and tables.

For the kids and designated drivers, there are artisanal sodas made locally at Roaring Pines. The Church Hill-based shop will provide Kumquat Vinegar and Cherry Vanilla varieties to start.

Three styles of cold brew coffee infused with nitrogen, made by Confluence Coffee, will be sold. Confluence uses a Manchester facility to make 45 barrels of coffee every two weeks using a 15-barrell brewing system.

Initially, Steam Bell will be open Thursday, Friday and Saturday.

“We plan to move aggressively into hours,” Johnson said.

Food trucks Slideways, Return on the Mac and Boka will be on site Saturday.

Also on tap in addition to the beer previously mentioned:   Smoked Braggot, a beer made with smoked malt and honey aged over applewood and cherrywood from Copper Fox Distillery; Southern Stubby, an IPA that is dry hopped with Nelson Sauvin hops from New Zealand; and Deep Roots, a bourbon barrel wee heavy collaboration with the local homebrew club, MASH.

The two “Barrel Maker Projects” will be tapped also: Heritage, a barrel-aged sour beer and Legacy,  a Brett Pale Ale that is aged in a bourbon barrel and dry hopped with citra hops.

Over the river and through the tolls…

For those crossing the river to visit, don’t forget toll money. The drive took 27 minutes from Scott’s Addition.

The staff laughed when I commented on the drive.

“That’s what we get when we drive to your breweries,” they said.

It’s worth the toll money, though, for the beer – and the environment.

“My rule of philosophy and I’m trying to instill it in everyone here is ‘everybody is our friend, be the kindest, politest person you can be’– never at the expense of someone else,” Cooper said.

May the changing tide raise all beer glasses to that.