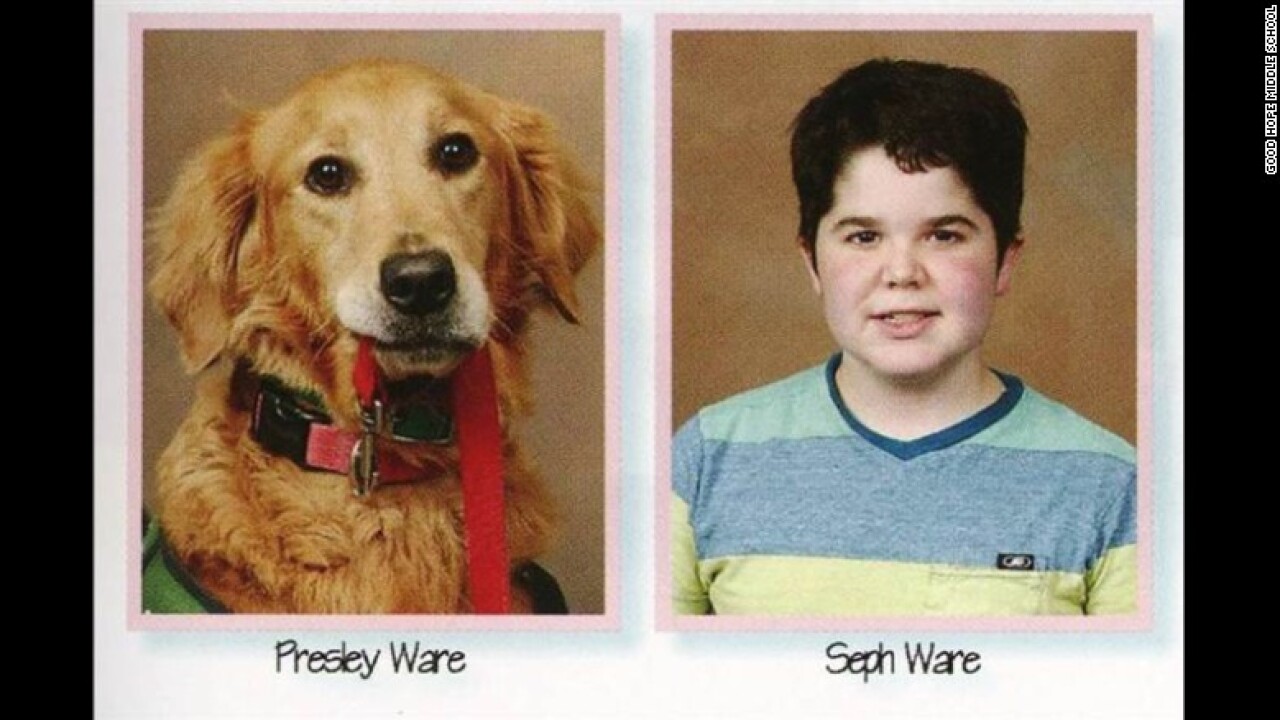 Presley the service dog is always at her owner’s side, which is why she earned a spot alongside him in his middle-school yearbook.

The seventh-grader has Duchenne muscular dystrophy, a degenerative disorder in which the muscles become weaker and weaker. When Seph drops a folder or is too weak to walk over and get something, Presley helps him out, his family said.

“(The school) must have felt like she’s been here enough and is such a part of the school that she deserved a picture,” Seph told CNN on Saturday.

After yearbook adviser Sonya Hogg saw how close Presley and Seph had become, she had an idea.

“It’s just like having another student, a very quiet student,” Hogg told CNN. “When it came time to putting the yearbook together, there was no question that Presley had to be included in it because she’s part of our school.

“She gives him more confidence and some maturity, and is a great help to him.”

Seeing the canine’s yearbook photo alongside their son’s in late April was a surprise to the family. Apparently, Seph didn’t mention it when school photos were taken in the fall, said his father, Joe Ware Jr.

“Seph is so laid-back, so nonchalant. He didn’t even tell us,” Ware said.

“It took them about 10 minutes to get the right shot. When they put the leash in her mouth, they somehow got the perfect shot.”

Presley, who is almost 6, joined the family three and a half years ago. It took one year of training before Presley was able to come help Seph, his family told CNN. Presley is trained to flick lights on and off, fetch shoes and even run for help if Seph falls.

“Presley makes us happy every day, so it’s really been nice to see the rest of the world be happy because of her as well,” Seph’s mother Lori Watkins-Ware said.

The companionship goes beyond school — Presley is part of the family.

“We throw a ball and give her treats and mess around with her in the yard,” Seph said. Sometimes she sleeps in his bed.

While Seph is still walking, his parents know there will be a day when Presley and the family need to help even more.

Seph has been having difficulty getting in cars and going up stairs, so his parents have to lift him. Sometimes he has difficulty bending down and picking things up.

There is no cure for the disease, which most often affects young boys. The life expectancy for someone with Duchenne’s is in their 20s, according to the National Institute of Neurological Disorders and Stroke.

Despite his situation, Seph has a message of hope he wanted to share with his peers.

“I want to tell other kids that know what your circumstances are, no matter how messed up it seems, you just have to find hope,” Seph said. “It’s easy to find if you give it a lot of hard thought — you can succeed in that goal.”