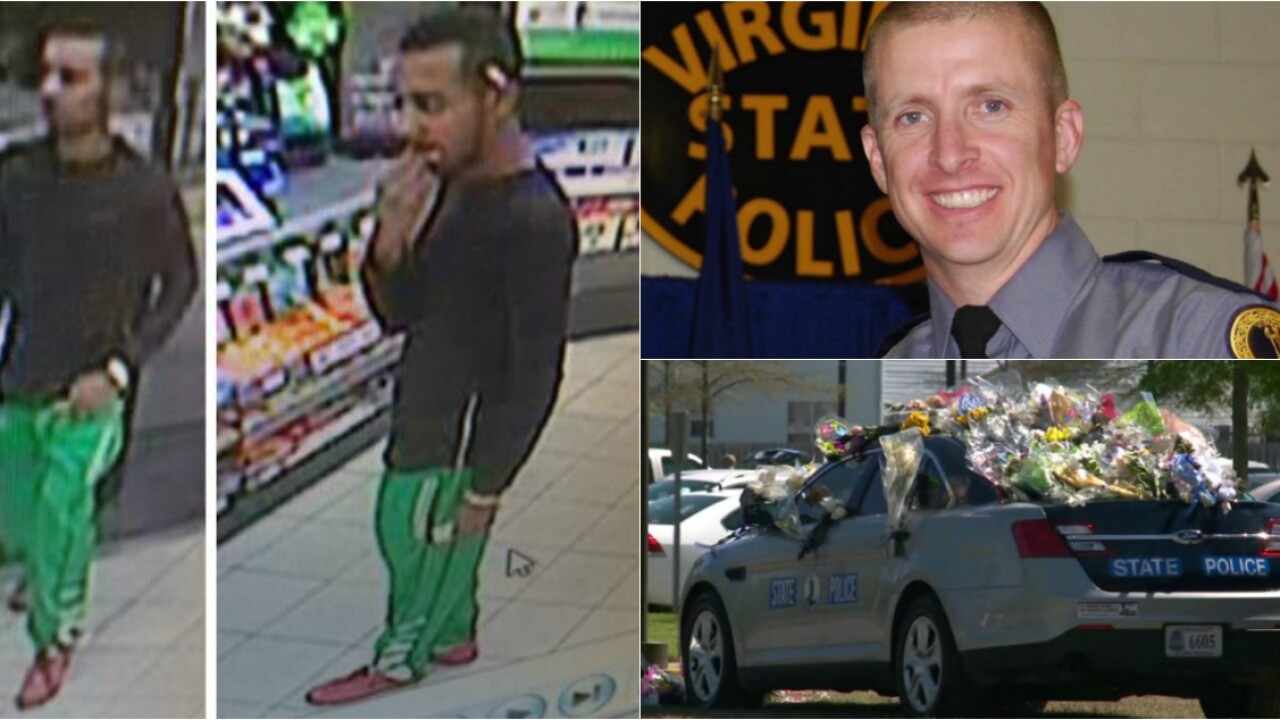 It was unclear how much money was in the donation jar when it was stolen from the Route 17 convenience store.

Donations for Trooper Dermyer poured in from across the country

In the days following Dermyer's death, the executive director of the Virginia State Police Association said $55,000 in donations had been sent in from around the country. That money would go to support the trooper's widow and two children.

Wayne Huggins, who has been a member of the Virginia State Police Association since the 1970s, said he had never seen such an outpouring of support for a fallen trooper.

The Virginia State Police Association is accepting donations for the Dermyer family.

Checks should be addressed to VSPA Emergency Relief Fund and with Trooper Dermyer in the “memo” line.

Donations can be mailed or dropped off at the VSPA at 6944 Forest Hill Avenue in Richmond, Virginia 23225.

Virginia State Police Superintendent Colonel W. Steven Flaherty described the March 31 fatal shooting as something that happened without alarm and within seconds.

Dermyer and 16 other troopers, special agents, and supervisors, were going through a training operation at the bus station, when he approached James Brown III, 34, of Aurora, Illinois. The interaction was part of Trooper Dermyer's introductory training, as he was new to the counter terrorism and criminal interdiction unit.

Dermyer tried to carry a conversation with Brown near the front entrance of the bus station around 2:40 p.m., but within seconds Brown pulled out a 40 caliber Beretta semi-automatic pistol from his pants and shot Dermyer multiple times.

At that point, two troopers returned fire, striking Brown and taking him into custody. Brown was transported to VCU Medical Center where he died.

Col. Flaherty said Brown was coming from Raleigh and headed to Chicago through the Greyhound bus with 143 rounds of unspent ammunition in his possession.

CBS 6 reporter Mark Holmberg uncovered brown’s extensive criminal history in his home state of Illinois, with charges including murder, intent to kill, aggravated battery with a firearm, failure to obey police, and aggravated battery of a pregnant woman.

Edith Brown, who helped raise Brown and had allowed him to stay with her until December, when she said she told him he had to leave, said her nephew's actions did not surprised her

"He always liked the criminal side," she said. "He had a lot of anger about the police in the past. He pretty much thought he wanted to be infamous . . . in terms of having a showdown. He always praised those people who got into shootouts with police."