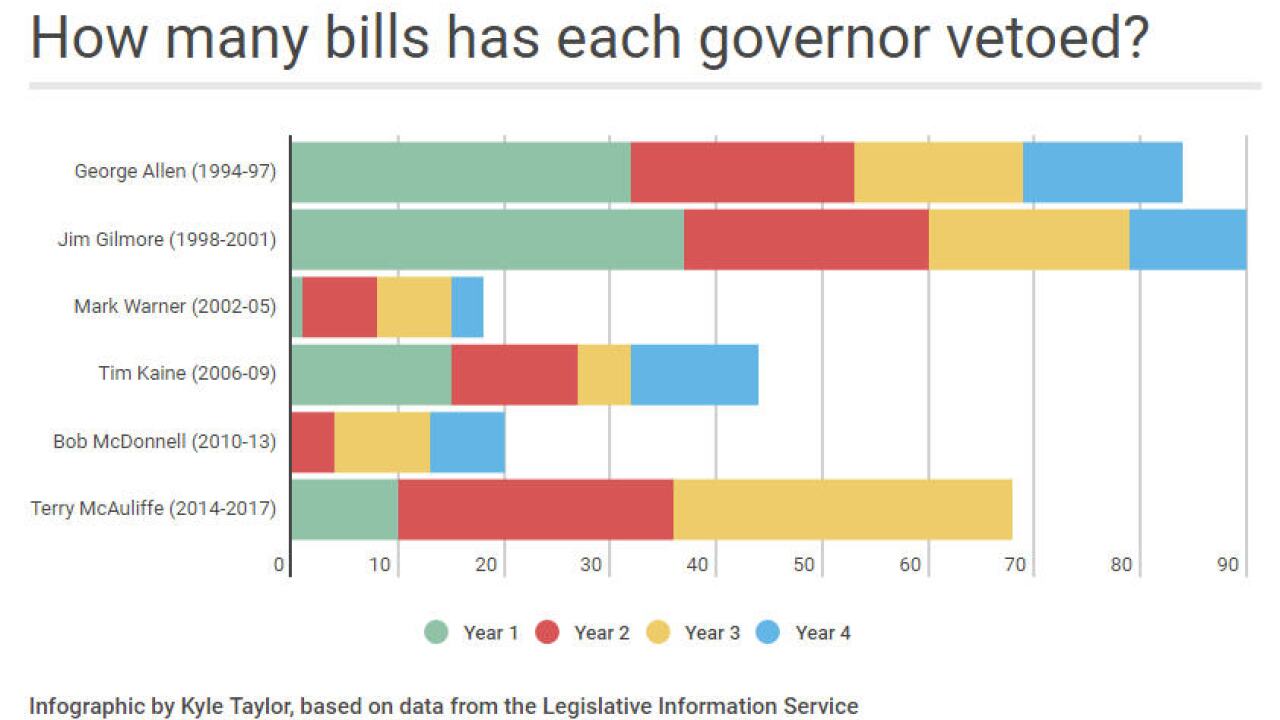 RICHMOND – Virginia legislators will return to the state Capitol on Wednesday to consider whether to uphold or override Gov. Terry McAuliffe’s vetoes and recommendations of legislation passed during their 2016 session.

The Democratic governor vetoed 32 bills approved by the Republican-controlled General Assembly. That is the most vetoes since 1998, when Jim Gilmore, a Republican, was governor and most legislators were Democrats.

McAuliffe objected to a slew of hot-button bills – from a measure that would allow some school security officers to carry guns on the job, to the so-called “Tebow Bills” that would allow home-schoolers to participate in high school sports.

In addition, McAuliffe recommended changes to more than 50 bills. While many of the recommendations are minor, several involve the state budget, ethics rules and other major issues.

For example, the General Assembly passed a bill to make the electric chair the default form of capital punishment if the state cannot obtain the drugs to administer a lethal injection. Instead, McAuliffe recommended authorizing the Department of Correction to mix the drugs – using products from pharmacies that would remain anonymous.

Overriding a veto requires a two-thirds majority in both the House and the Senate. That is unlikely, because Republicans hold just 21 of the 40 seats in the Senate.

Gubernatorial recommendations must be approved by only a simple majority in both chambers. If the General Assembly rejects a recommendation, the governor then can veto the entire bill.

Here are some of the more controversial bills vetoed by McAuliffe.

This bill would allow any minister or religious organization to refrain from participating in any marriage that goes against their religious beliefs such as same-sex marriages.

In his veto message, McAuliffe wrote, “Although couched as a ‘religious freedom’ bill, this legislation is nothing more than an attempt to stigmatize.” The governor also said the measure would be bad for the economy: “Businesses and job creators do not want to locate or do business in states that appear more concerned with demonizing people than with creating a strong business climate.”

This legislation would protect officers from being charged with a misdemeanor offense while on the job. It would require a judge to get authorization from a law enforcement agency or the commonwealth’s attorney to issue an arrest warrant for a misdemeanor offense, unless the alleged offense was reported by another police officer.

McAuliffe said: “Virginia enjoys outstanding law enforcement officers at all levels. They are not, however, perfect.” He said the bill could prevent judges from acting on “valid citizen complaints of police abuse.”

These bills would allow domestic violence victims under a protective order to carry a concealed handgun for 45 days.

McAuliffe said the legislation “encourages victims of domestic violence to introduce deadly weapons into an already dangerous situation, an approach that I believe could have significant negative public safety consequences.” The governor proposed expediting the process of issuing concealed weapons permits to domestic violence victims if they receive firearms training; however, lawmakers have rejected that idea.

Under this legislation, nicknamed for quarterback Tim Tebow, public schools could allow home-schooled students to compete in interscholastic competitions.

McAuliffe noted that public school students must meet certain academic criteria to participate in extracurricular activities. There would be no guarantee that home-schoolers meet the same criteria, McAuliffe said. “Participation in athletic and academic competitions is a privilege for students who satisfy eligibility requirements.”

This bill would require elementary and secondary schools to notify parents before teachers provide children any “sexually explicit content.” Schools would have to let parents review the material and provide a non-explicit alternative. The bill was in response to a complaint by the mother of a Fairfax high school senior about Toni Morrison’s award-winning novel “Beloved,” which includes graphic scenes of slavery, rape and murder.

McAuliffe said that “open communication between parents and teachers is important” but such issues should be decided by local school boards. He said the Virginia Board of Education has been examining the matter and working with parents and local officials.

The federal Environmental Protection Agency has ordered states to reduce carbon emissions from power plants. This bill would require the Virginia Department of Environmental Quality to receive approval from the General Assembly before responding to the EPA’s regulations.

This legislation would require officials to reject voter registration forms that lack a full name, date of birth, Social Security number, citizenship status, address or previous voter registration information. Applicants also would be rejected if they fail to check a box indicating that they will be at least 18 before the next general election.

“Government works best when as many citizens have a voice in our democracy as possible. We should be seeking ways to make it easier for qualified Virginians to participate in elections, not disenfranchising them over technicalities.”

On the Agenda for the Veto Session

Here is the complete list of bills vetoed by Gov. Terry McAuliffe. For more information on each bill, visit the Legislative Information Service (https://lis.virginia.gov/).