Cop who did something good for kids does something even better 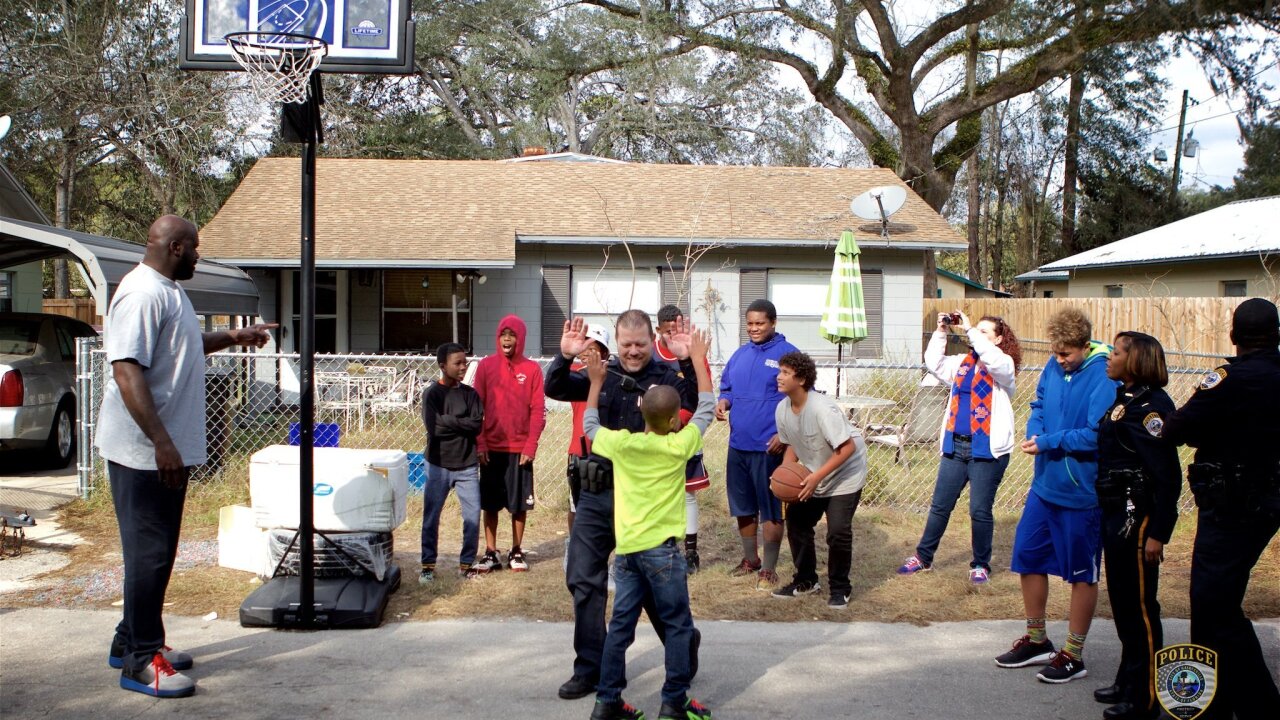 Basketball star Shaquille O’Neal made a special trip to Gainesville, Florida to play basketball with a group of kids, more than a week after someone called police to complain they were playing too loudly in the street.

It all started as a noise complaint: Kids on a residential street in Gainesville, Florida, were playing basketball in the afternoon too “loudly,” a neighbor told the police dispatcher.

Officer Bobby White of the Gainesville Police Department took the call. What he did next has since gone viral online and inspired a foundation that’s raised thousands of dollars from donors across the country.

“Can you believe someone’s calling to complain about kids playing basketball in the streets?” White says to the group of teens, before grabbing the ball and stepping back for a two-pointer, as captured on his police car’s dashcam video.

It’s the kind of call that White told CNN he looks forward to — one where he can interact with the kids in his community and help push back against what he calls a “damaged relationship” between law enforcement and the nation’s youths.

“If I would have went out there like RoboCop and started citing statutes and telling them that they’re breaking the law, it would have just reinforced that perception they already have and probably made it worse,” White said of the January stop.

Instead, White balled along for minutes, dribbling and pumping, passing, even going in for a dunk. His new nickname — to the neighborhood kids and the more than 17 million Facebook users who have watched the video of the interaction online — is the “Basketball Cop.”

When White rematched the kids the following week, bringing with him backup in the hulking form of former NBA star Shaquille O’Neal, the moniker became local legend.

It’s also now the name of the new foundation he created in February, which has already raised nearly $10,000 on the crowdfunding site GoFundMe.

The aim of the charity is to promote #HoopsNotCrime, a hashtag and philosophy that the Police Department’s savvy social media manager and spokesman, Officer Ben Tobias, thought up and tagged at the end of the viral video when he posted it on the department’s Facebook page days after the interaction.

“We’ve had a huge problem nationwide with juvenile crime and kids having nothing to do, so they just get out and start committing crime,” he said.

Gainesville, a city of about 127,000 in North Central Florida, has two full-time gang investigators who work to crack down on youth gangs that “plague all over the city,” Tobias said.

The kids in the “Basketball Cop” video were “doing something good,” Tobias said. “Let’s promote that. Let’s have kids do something good, play basketball — hoops — instead of being out there committing crimes.”

Part of that promotion came with the rematch that Tobias helped organize. Working with a media outlet that had connections to Shaq, Tobias planned a visit where the former Orlando Magic player would surprise the kids from White’s first stop in a rematch with other GPD officers.

Captured in another video gone viral, Shaq spreads the “Basketball Cop” philosophy, telling the kids “I grew up just like this. Only you can change this, and you can change it through basketball and showing respect to your peers like you did.”

Donations have rolled into the collection site from more than a hundred users, along with messages of support: “What a great way to build relationships with the communities you protect and serve”; “I pray this movement continues. It’s wonderful.”

With the funds raised and the help of local vendors, White’s foundation has begun work on plans to build permanent, compact courts by two apartment complexes in Gainesville.

The first will go up in a building where three of the kids from the noise complaint call live.

The second is planned on a church property next door to the largest public housing development in the city. The complex is home to more than 120 kids and doesn’t have a basketball court, White said.

“What if I can put a basketball court in an apartment complex?” White asked himself when he launched the project.

The courts in his city will become a model, White hopes, to challenge police departments around the country to try a similar approach.

“Go find me a project in your city like this, at a church, at an apartment complex, somewhere where you can make a huge impact on a lot of kids for years to come, and I’ll fund it,” White said.

They are ambitious plans for the viral video star. But he’s already found success by starting small.

In February, White used donations from a local concrete vendor and the sporting goods company Lifetime to build a backyard basketball court for Tyree Thomas, the teen who first tossed the “Basketball Cop” the ball in the original video.

Thomas plays on the new court with his friends every day. His neighbor no longer calls police to complain about the noise.

“It’s pretty awesome to practice at your house so you won’t get in trouble and all,” said Thomas, 16.

Officer White’s style of policing has flipped his opinion about cops, Thomas said, and he’d like to see the Basketball Cop Foundation go far.

“Yeah, because then people will stop doing drugs and stealing and just play sports,” Thomas said. “Trying to get an education, just get out of trouble.”