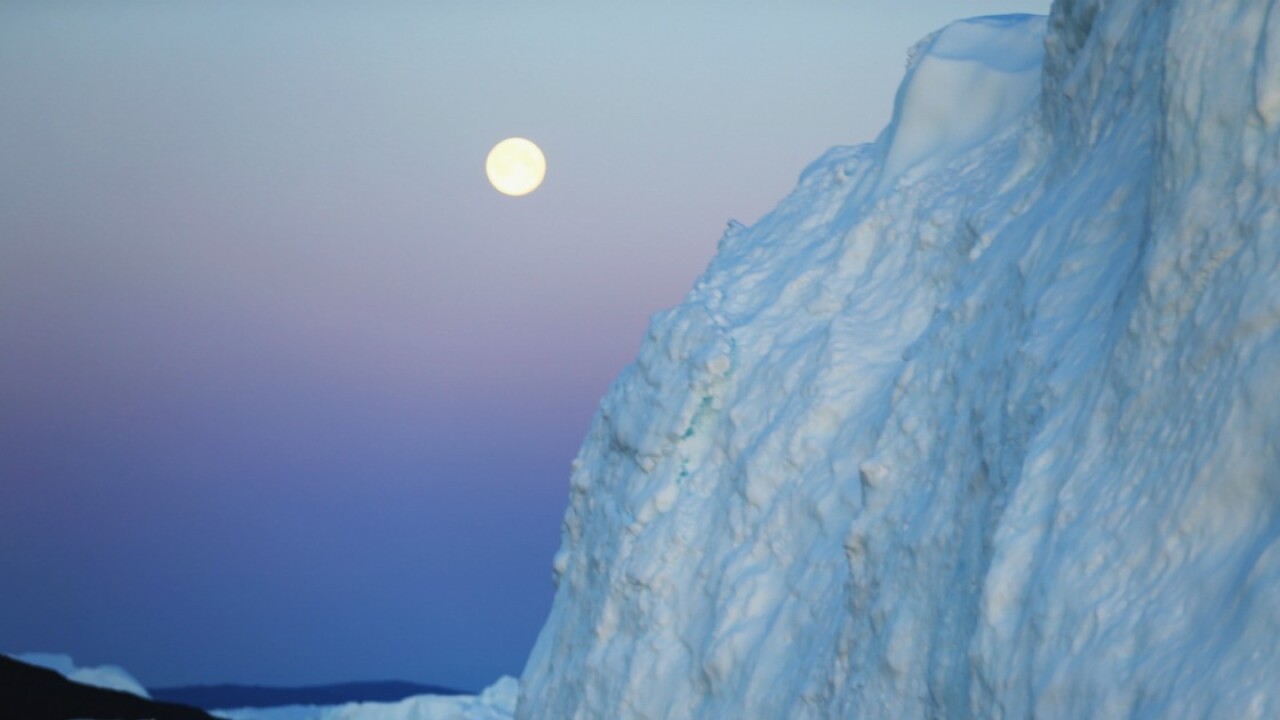 ILULISSAT, GREENLAND – JULY 23: A full moon is seen over an iceberg that broke off from the Jakobshavn Glacier on July 23, 2013 in Ilulissat, Greenland. As the sea levels around the globe rise, researchers affilitated with the National Science Foundation and other organizations are studying the phenomena of the melting glaciers and its long-term ramifications. The warmer temperatures that have had an effect on the glaciers in Greenland also have altered the ways in which the local populace farm, fish, hunt and even travel across land. In recent years, sea level rise in places such as Miami Beach has led to increased street flooding and prompted leaders such as New York City Mayor Michael Bloomberg to propose a $19.5 billion plan to boost the citys capacity to withstand future extreme weather events by, among other things, devising mechanisms to withstand flooding. (Photo by Joe Raedle/Getty Images)

A full moon is seen over an iceberg that broke off from the Jakobshavn Glacier on July 23, 2013 in Ilulissat, Greenland. (Photo by Joe Raedle/Getty Images)

Greenland’s massive ice sheet has started its annual summer melt earlier than ever before, according to stunned scientists who said they had to recheck their calculations before releasing the results.

Nearly 12% of Greenland’s nearly 656,000 square miles of ice saw some melting this week, the earliest date on record for the start of the summer melt season, according to scientists with the Danish Meteorological Institute.

The previous earliest dates were all weeks later, in May, according to Denmark’s polar research site, Polar Portal.

“We had to check that our models were still working properly,” DMI climate scientist Peter Langen said.

To be clear — the agency isn’t saying 12% of the world’s second-largest ice sheet melted away this week. Rather, researchers are saying that percentage of the ice melted just a bit, a millimeter or so, in most of the area.

But while the total amount of ice lost isn’t huge in terms of total volume, such early melting sets up a feedback mechanism that contributes to further melting, said CNN meteorologist Brandon Miller

“The melting and refreezing processes release additional heat and that can penetrate into the ice,” Miller said.

It’s possible that the ice sheet could be in for another big meltoff like in 2012, when some 95% of the sheet saw some melting.

Greenland’s ice sheet — roughly the size of Alaska — is important because it’s the second-biggest potential ice-melt contributor to sea-level rise, only behind Antarctica’s ice sheet.

It’s been losing ice at an average pace of 287 billion metric tons a year, according to NASA.

Should the entire thing melt — which isn’t imminent — sea levels around the world could rise by 20 feet.

Melting from Greenland’s ice sheet is also likely contributing to colder sea temperatures south of the island, and could have dramatic impacts on ocean circulation and even inhibit hurricane production.

Such melting is an expected byproduct of climate change, according to scientists. Temperatures are going up around the world, but nowhere as much as in the Arctic, which has seen record warmth this winter.

Recent reports have increased concern about the impact of rising sea levels from ice melt, including a study released this month in the journal Nature suggesting that melting ice in Antarctica has the potential to contribute to a rise in sea levels of more than 3 feet by the end of the century.

In September, NASA said the world is likely facing sea level increases of at least 3 feet, regardless of efforts to slow climate change — surpassing projections from a few years earlier.