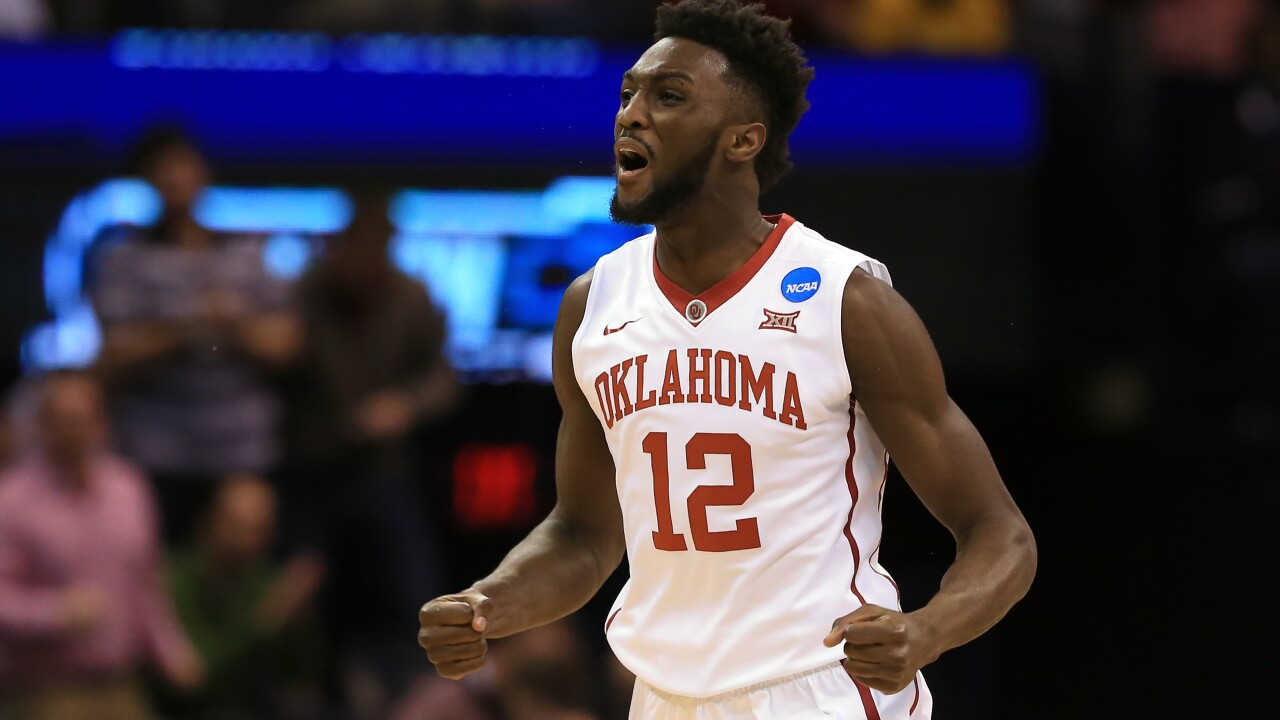 Khadeem Lattin #12 of the Oklahoma Sooners celebrates in the first half against the Virginia Commonwealth Rams during the second round of the 2016 NCAA Men’s Basketball Tournament at Chesapeake Energy Arena on March 20, 2016 in Oklahoma City, Oklahoma. (Photo by Tom Pennington/Getty Images)

HOUSTON — This was supposed to be nothing but a joyous homecoming for Oklahoma sophomore forward Khadeem Lattin.

The NCAA men’s Final Four is in Houston, his home city. It has also been 50 years since his grandfather, David Lattin, was part of the historic Texas Western team that famously defeated Kentucky for the 1966 national championship.

This weekend for Khadeem Lattin could have been perfect, but then the news came.

On Wednesday, Lattin’s grandmother, Brenda Fair, died after a battle with lung cancer, just hours after Lattin’s arrival in Houston with his Sooners’ teammates ahead of the Final Four.

Lattin tweeted that an angel had gone home that night and that he wished he could have played in front of her.

Despite the loss, Lattin has remained with his teammates.

“I was sad, and I did not sleep a lot, but you now have got to win for grandma,” Lattin said.

There’s something idyllic about Lattin’s trip to the Final Four coinciding with his home city and with his grandfather’s historic past.

David Lattin was the starting center for Texas Western, which is now known as the University of Texas at El Paso. Back when he played, the NCAA tournament wasn’t March Madness. Then, there were just 22 teams in the field, unlike the 68 today.

And back then, no team with an all-black starting lineup had won a national championship.

The civil rights movement was in motion. However, it was still commonplace to see segregation, especially in the South, within men’s college basketball.

In 1966, Texas Western became the first team to start five black players in NCAA championship history. And when they won against an all-white Kentucky lineup 72-65, the symbolism wasn’t lost, even in the South. All-white leagues such as the Atlantic Coast Conference, Southeastern Conference and Southwestern Conference were integrated within the next two years. The story of the Texas Western championship team also was the inspiration for the 2006 movie “Glory Road.”

David Lattin had 16 points, second-highest on the team, and nine rebounds in the win, a game his grandson has watched.

“It is awesome to see such an impactful moment and people realize how impactful it was,” Khadeem said.

Khadeem Lattin #12 of the Oklahoma Sooners speaks with the media during a press conference prior to the 2016 NCAA Men’s Final Four at NRG Stadium on April 1, 2016 in Houston, Texas. (Photo by Justin Heiman/Getty Images)

Now, with Khadeem, who has started every game for the Sooners this season, averaging 5.7 points, 5.3 rebounds and 2.1 blocked shots, family history has the chance to repeat itself 50 years later.

“It is kind of poetic that it happened 50 years apart exactly, and I want to win it,” Khadeem said. “Hopefully me and my grandfather can be in a select club.”

‘She is going to watch out for me’

The death of his grandmother has added to Lattin’s motivation to win. The sophomore was able to visit with her a couple of weeks ago.

“He had that opportunity, but it still doesn’t make it any easier because it’s tough,” Oklahoma head coach Lon Kruger said.

Said Lattin, “It is just one of those things you just have to compartmentalize and just focus. I’m just going to pray and know she is going to watch out for me.”

Kruger said there’s no doubt that for Oklahoma to defeat Villanova and have any chance to advance to Monday’s national championship game he’ll need a big game from Lattin.

“When we’ve played our best, Khadeem has been a big factor blocking shots, right-handing the ball, defensively in the low post,” Kruger said. “He’s been very active here of late.”

And even though she’s gone, Lattin knows he still has a fan in his grandmother.

“She’s a spirit now and has my back no matter what,” Lattin said.