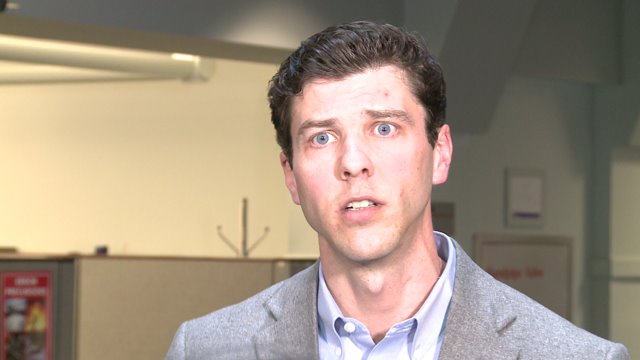 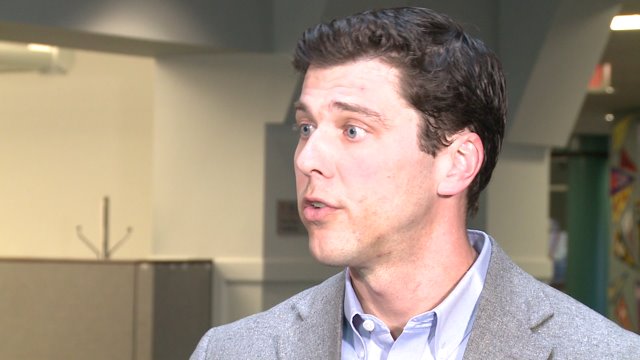 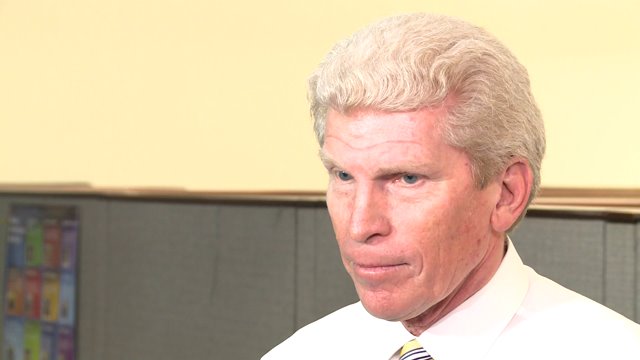 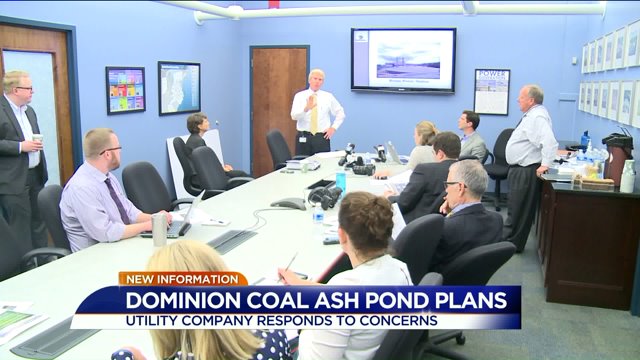 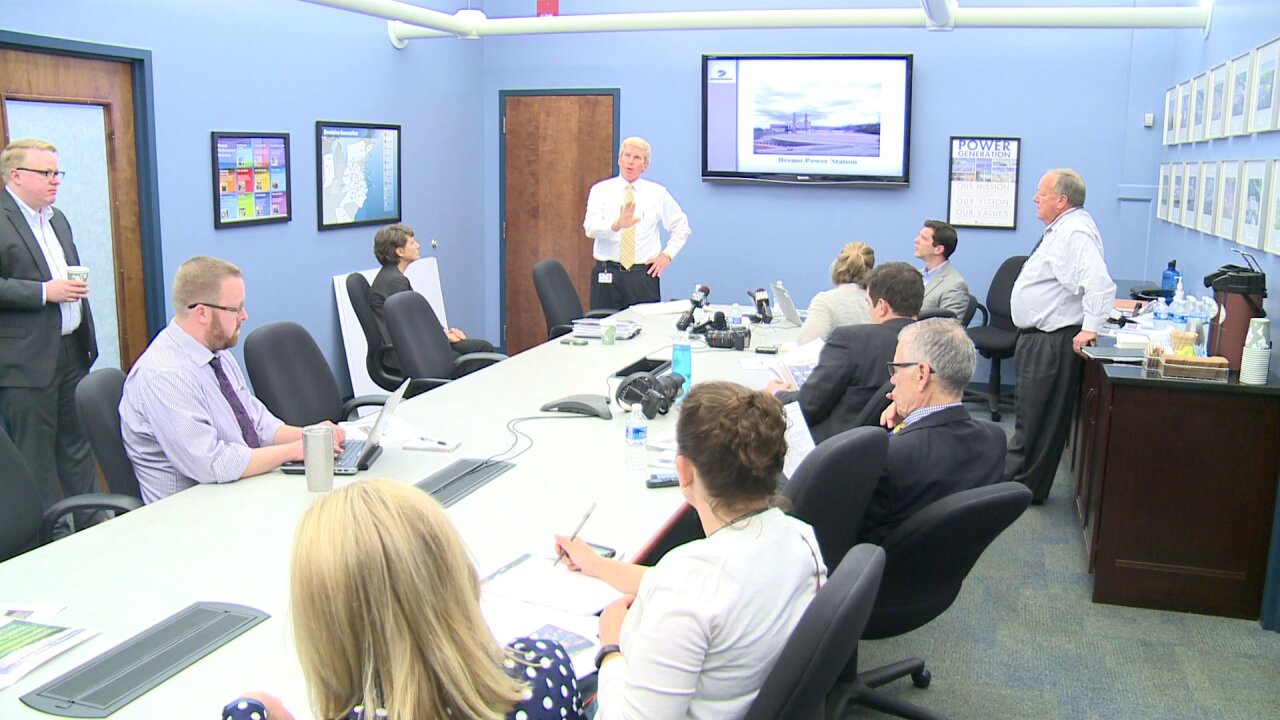 RICHMOND, Va. – The day after 17 students were arrested while protesting Dominion Power’s permits to discharge treated coal ash waste water into Virginia waterways, the utility company hosted the media to answer questions about the process.

Dominion hosted a question and answer session with the media Tuesday to discuss the plan to close 11 coal ash ponds at four locations. The plan, mandated by the Environmental Protection Agency, said it will cost about $11 billion dollars.

In January the State Board granted two permits to Dominion to begin draining the coal ash ponds at the Bremo Bluff and Possum Point plants. At the Bremo plant upriver of Richmond, there are three coal ash ponds which contain approximately 357 million gallons of water (dependent on rainfall) that need to be drained over the next year and a half.

The public has protested the high levels of heavy metals like arsenic that would be permitted to discharge into the James River. But the utility company made two main points Tuesday.

They emphasized that their treatment facilities will make the discharged coal ash wastewater even cleaner than the DEQ is requiring of them in permits.

Environmental advocates argue that Dominion has known of the needed technology to accomplish this, but has not yet committed to it.

The company has said they are working with several firms that specialize in on-site wastewater treatment. The two recent permits are the first of their kind issued in the state, and there will be more to follow as Dominion moves away from burning coal.

“Each site is being evaluated individually to select the best treatment process to protect the James and Potomac rivers and other waterways,” the company said.

Dominion's second point Tuesday had to do with the amount of treated water that will be discharged.

A spokesperson said they plan to discharge about 1,500 gallons a minute, once the treatment site is completed sometime in April. Over an 8-hour period that would amount to 720,000 gallons, or just larger than an Olympic swimming pool of treated wastewater.

The company pointed out that the river flows at a rate of 5.5 million gallons a minute and the treated wastewater will be safely diffused into the James River.

“So that is an area of 2,000 feet length and 16 feet wide and that is the area allowed for mixing in the permit,” said spokesman Jason Williams.

Dominion said they will pump 1,500 gallons a minute, or about the amount of a above ground swimming pool. That stands in contrast to the 5.5 million gallons of the James River in the spot where they are dumping.

“The permit itself is protective, those limits were established to protect the river, but our treatment system will be able to treat further than what those requirements are,” Williams said. “We've also committed to treating all waters that are discharged from these ponds.”

There is a lot of mistrust from environmentalists who say Dominion hasn't been forthcoming about the whole process, and worry the utility giant is setting a dangerous precedent.

The Southern Environmental Law Center (SELC) worries about the closing of the coal ash ponds.

“Coal ash must be removed to dry, lined storage facilities away from our rivers and drinking water supplies,” said Mike Mather, Senior Program Communications Manager at SELC. “You and I can’t dig unlined holes in our back yards to dump toxic trash, and power companies shouldn’t be allowed to do that either.  But in many cases, that is exactly what a coal ash lagoon is – an unlined hole in the ground, with material containing arsenic and other pollutants that are known to be toxic. “

Those in opposition to the plan want Dominion to truck the waste out of the ponds.

Dominion said that would take approximately 1.6 million truckloads and cost over $3.5 billion – and it would still have to be on the roads, and then stored somewhere.

“Other power companies are now agreeing to dredge and remove contaminated coal ash away from our rivers and drinking water supplies,” said Matheres. “South Carolina Electric and Gas (SCE&G) is right now moving roughly 2.4 million tons of coal ash to a lined landfill.  Santee Cooper, also in South Carolina, is removing 1.3 million tons of coal ash from the banks of the Waccamaw River. “

“The South Carolina solution remains the standard for what must be required, and it is a standard that we have not yet achieved in Virginia,” he added.

“We are all going to be able to use the river, with no impact, just as we are right now,” he added. “I think that is the biggest misconception out there.”

Dominion pointed out that they would still have to deal with the wastewater no matter what.

“I think the really important thing to clarify is that one, we are treating all the water and we are treating to stringent limits to be protective of the river,” Williams said.

“Everything that we all enjoy doing in the river, we are going to be out there doing this summer.”

“We are all going to be able to use the river, with no impact, just as we are right now,” he added. “I think that is the biggest misconception out there.”

'It's not like we close and walk away we will always have a responsibility to monitor, to manage, to maintain, to take care of issues whether that be a erosion, rodents, other things that might happen," said  spokesperson David Cramer.

The DEQ permit is here.

Video clips from the Q & A are below.