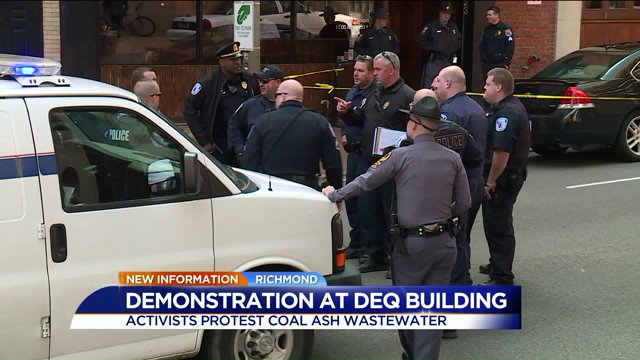 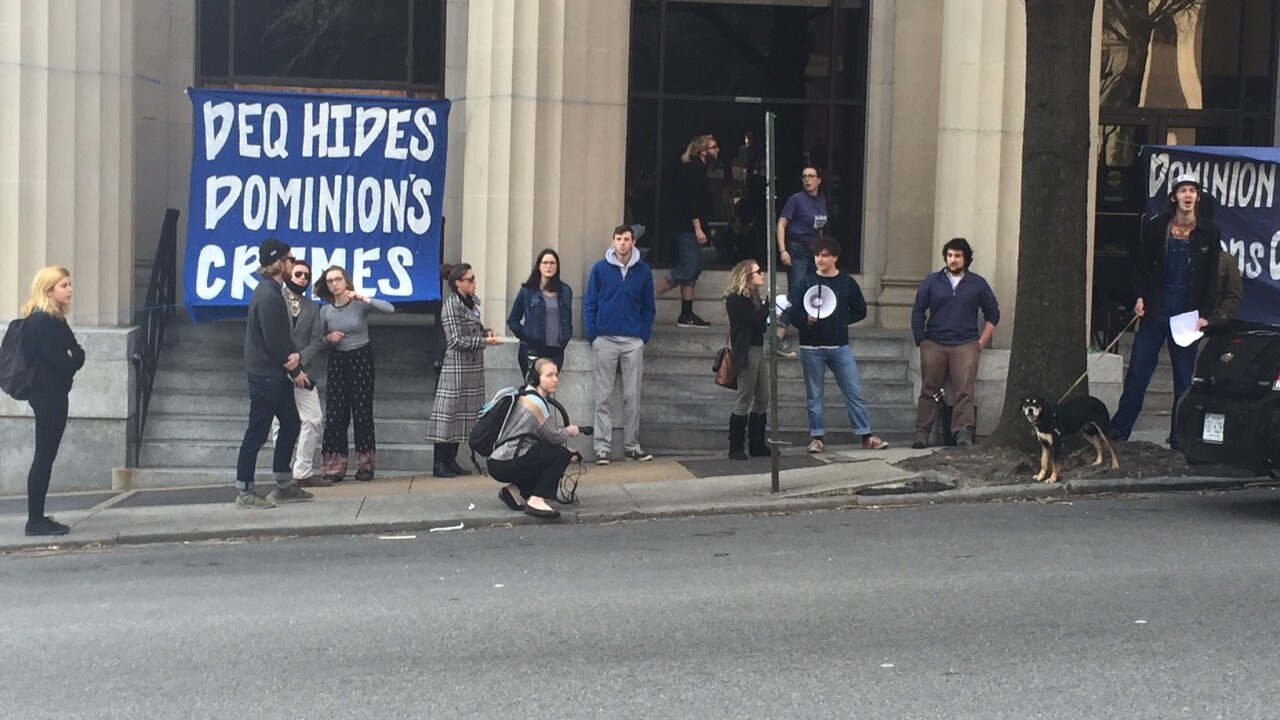 RICHMOND, Va. – Student activists were singing as police ticketed protesters for trespassing at a state agency on Monday, March 7.

At 10 a.m. the activists entered the Department of Environmental Quality headquarters, located at 629 E Main St, and presented their intentions and demands.  They targeted the DEQ for recently drafting permits that will allow a utility company to discharge treated coal ash wastewater into Virginia waterways. A State Water Board approved those permits on Jan. 14. 2016.

The students refused to leave the DEQ lobby until Director David Paylor agreed to repeal the permits recently issued to Dominion which allow for the dumping of coal ash wastewater into the James River and Quantico Creek – which feeds into the Potomac. 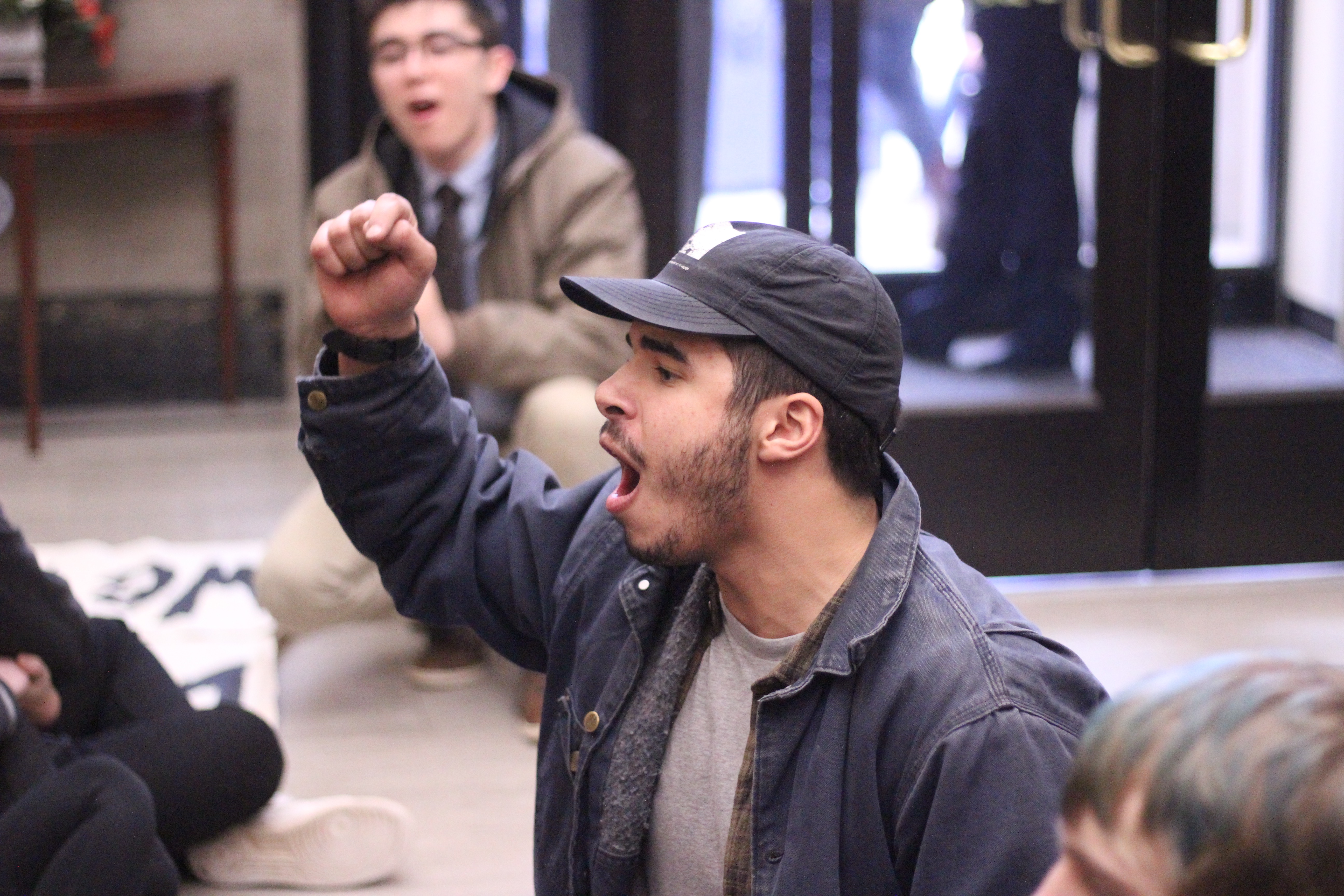 The group also asked for the permits to be rewritten to comply with the best available technology standards, in accordance with the Clean Water Act, and that a mechanism for independent third party monitoring be implemented.

The current permits are in accordance with the Clean Water Act, argues the DEQ, and Dominion will be required to do monthly testing.

Students also called on the current permits to be halted, and re-issued only after an investigation into the 2015 dumping of untreated wastewater into Quantico Creek.  The activists said that an environmental agency contacted Paylor in June 2015, to report that a coal ash pond at Dominion’s Possum Point Power Plant may have been illegally drained.

Paylor’s response, according to the Southern Environmental Law Center was that “our best information is that no water was discharged to state waters.”

Eight months later, InsideNova released a story in which Dominion spokesman Dan Genest confirmed 33.7 million gallons of untreated wastewater had been dumped into Quantico Creek in May 2015.

The next day, according to the agency, DEQ officials told the Prince William County Board of Supervisors meeting they were aware of Dominion’s untreated discharge in May of 2015.

“It was legal under the permit we had then,” Genest maintains.

A rally also took place outside of the building Monday and eventually shut off traffic moving through Main Street.

Student activists were singing as police ticketed protesters for trespassing at a state agency on Monday, March 7.

“David Paylor can’t keep his story straight regarding the wastewater dumping that took place last summer,” said Sarah Kinzer, a sophomore at Mary Washington. “If this is because he is covering for Dominion’s illegal activities, then how can we trust him to make future decisions regarding our environmental safety?

Students like Kendall King called for Paylore’s resignation if he “cannot adequately meet the health and safety needs of Virginia residents.”

Around 35 protesters attended. After 1 p.m., police removed about 17 people from inside the building. That group of protesters was issued tickets for trespassing. The people outside were moved across the street, and were not issued tickets.

As outcry continues against their plan, Dominion has become more vocal about the dewatering process, and released resources intended to help educate the media and the public.

Dominion and DEQ officials have declared that the plan is safe and up to standard, and the proposed permit has gone through appropriate public comment and revision.

Student activists were singing as police ticketed protesters for trespassing at a state agency on Monday, March 7.

“Well first I would like to say we respect the students for expressing their opinions and doing it peacefully,” said Genest. “However we do wish that they would have their information correct.”

Dominion will be building extensive water treatment facilities and Genest said that this water will be treated, tested and released.

Dominion maintains that they water they release will be cleaner than what the federal regulations and DEQ are requiring.

Dominion is mandated by the Environmental Protection Agency to dewater the coal ash ponds as the company moves away from burning coal. They will be officially closed on April 18, 2018.

That’s why they are acquiring water permits.

Next they will need permits to address the stabilization of the coal ash, which will be a solids permit. The hearing for the solid waste permit will be in April.

The remaining two ponds will be closed in place using an engineered cover system consisting of a high density polyethylene layer, covered by 24 inches of soil, and vegetative cover to blend with the existing landscape. The cover system will protect ash from rainfall and protect groundwater, they said.

Dominion maintains that the water will be treated.

We’ll do this on-site using a multi-stage process according to stringent, government-mandated levels before discharge,” reads the fact sheet.

“We’re working with several firms that specialize in on-site wastewater treatment. Each site is being evaluated individually to select the best treatment process to protect the James and Potomac rivers and other waterways.”

The DEQ and environmental lawyers have previously acknowledged that the Bremo permit does allow for a “mixing bowl” area downstream of the power plant that will technically violate water quality standards before it is mixed with the James.

The established levels can be found in the permit posted on the DEQ site. The information starts on page 13.