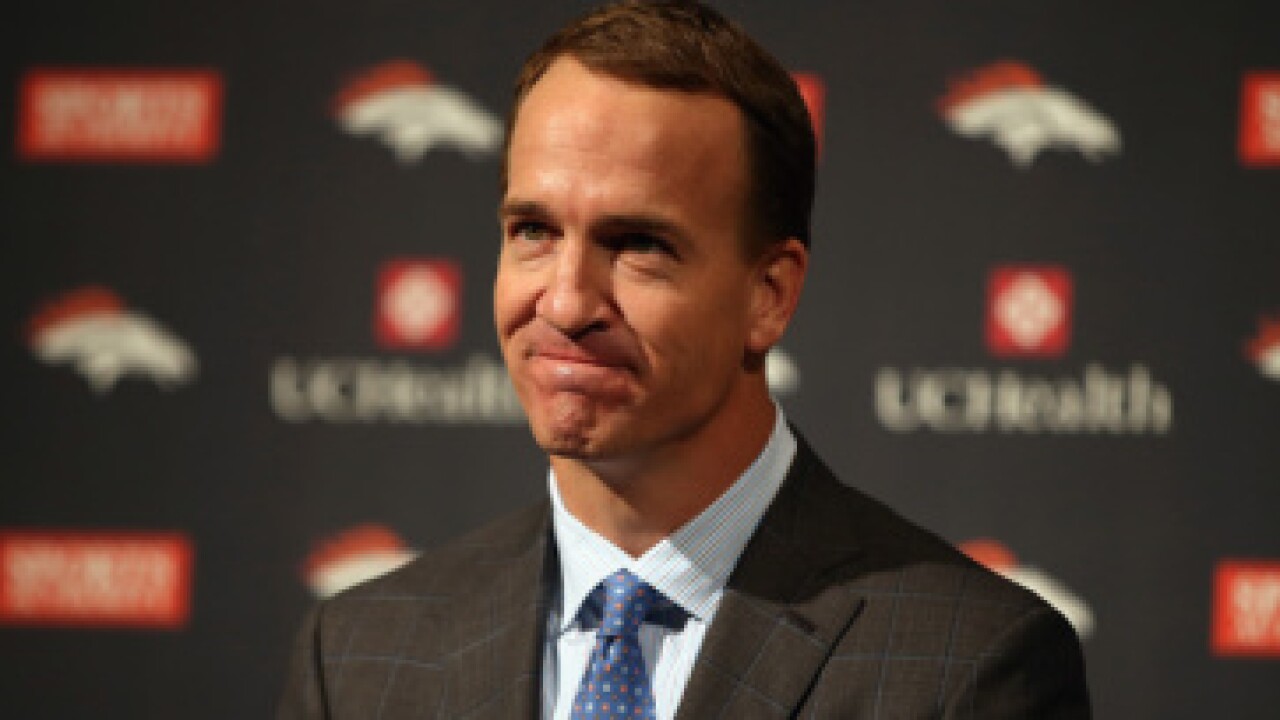 DENVER -- Peyton Manning bid an emotional farewell to football Monday, retiring after 18 game-changing years that left him among the game's elite.

"I revere football," Manning told reporters at a Denver Broncos news conference. "I love the game. So you don't have to wonder if I will miss it."

The Broncos quarterback did not say what he will do next.

Friends, former teammates and league officials praised Manning for his mastery of the game and contribution to the communities in which he lived and played.

"Few have left their marks on a sport as Peyton Manning has," Indianapolis Colts owner Jim Irsay said. "Simply put, he revolutionized NFL football. Peyton energized it as had no one before him, he made it more fun for our fans, and made the game better."

The 39-year-old goes out on top, having led the Broncos to a Super Bowl championship in February.

The five-time NFL MVP is also the only quarterback to win the Super Bowl with two teams and one of only two to beat every team in the NFL. Retired quarterback Brett Favre is the other.

"In my opinion, Peyton goes down as the best quarterback who ever played," former Colts teammate Brandon Stokely said. "Without a doubt, he revolutionized the position, and now, all QBs want to live up to the standard he set. Nobody will ever do it the way he did it."

'Peyton has not lost sight of what is truly important'

In addition to his on-field accomplishments, Manning is widely recognized for his philanthropic efforts.

His PeyBack Foundation has raised more than $10 million for at-risk kids in Colorado, Indiana, Louisiana and Tennessee, and his philanthropic relationship with Indianapolis' St. Vincent Hospital prompted the medical center to rename its children's facility the Peyton Manning Children's Hospital in 2007.

He and brother Eli, a quarterback for the New York Giants, helped the Red Cross deliver supplies to their hometown of New Orleans and other Gulf Coast locales after Hurricane Katrina. Last year, he received the Bart Starr Award for his charity work.

"Throughout his entire career, Peyton has not lost sight of what is truly important -- that's giving back to the communities in which he has lived," PeyBack Foundation Executive Director Elizabeth Ellis said. "The impact he has made and will continue to make to youth is second to none. Even though he will be done on the field, he will continue to be a role model to all."

Matured into an elite quarterback

Manning, who attended the University of Tennessee, was drafted first overall in the 1998 NFL draft by the Colts. His well-known penchant for preparation showed up even then, said Manning's former quarterbacks coach at the Colts, Bruce Arians.

"We had him in for a pre-draft interview in '98, and he had a notebook full of questions for us, including one about the Indiana tax code," said Arians, who is now the coach of the Arizona Cardinals. "I remember thinking, 'Who interviewed who here?' "

After an uneven rookie season, Manning began to mature into the elite quarterback he would eventually become.

He won the first of his five MVP awards in 2003 but struggled in the postseason. It wasn't until 2007 that he won a coveted Super Bowl championship with the Colts, defeating the Chicago Bears 29-17.

The Colts returned to the Super Bowl in 2010 but lost.

An iron man with deadly accuracy, Manning played every game of his first 13 seasons until a neck injury sidelined him for all of 2011.

The following year, the Colts drafted a new quarterback, and Manning headed west to Denver.

There, he picked up where he had left off, playing every game for his first three seasons, while completing almost 68% of his passes and throwing for an average of at least 291 yards per game. He also threw 131 touchdowns in that time and set the record for most touchdowns in a season in 2013.

His efforts in Denver culminated with a 24-10 win over the Carolina Panthers in February's Super Bowl, a game noted more for the play of Denver's defense than Manning's offense.

Still, he had secured a second ring, helping quiet criticisms of his 14-13 playoff record as a pro and failure to win a championship during his college career at Tennessee, despite having the keys to some pretty awesome teams.

"After competing against Peyton many, many times, I already had great respect for him," Broncos coach Gary Kubiak said. "But being with him this season, going through what we went through and accomplishing what we accomplished -- that was special. He and I battled together, and along the way we talked about dreaming that it could end the way it ended. And I'll be damned, it did."

Brady was one of many players to send their congratulations to Manning.

"Congratulations Peyton, on an incredible career," Brady said on Facebook. "You changed the game forever and made everyone around you better. It's been an honor."

Manning's reputation as a person and player has generally been considered beyond reproach, though two controversies surfaced or resurfaced this year: allegations that he used performance-enhancing drugs and that, as a student at the University of Tennessee, he sat on the face of a female trainer who was treating him.

He has vehemently denied the former while downplaying the latter, saying he merely "mooned" a teammate in the trainer's presence -- "not exactly a criminal offense, but out of line."

But, on Monday, the focus was on an unprecedented football career and best wishes for whatever's next for the well-liked player.

CNN's Jill Martin and Jason Durand contributed to this report.