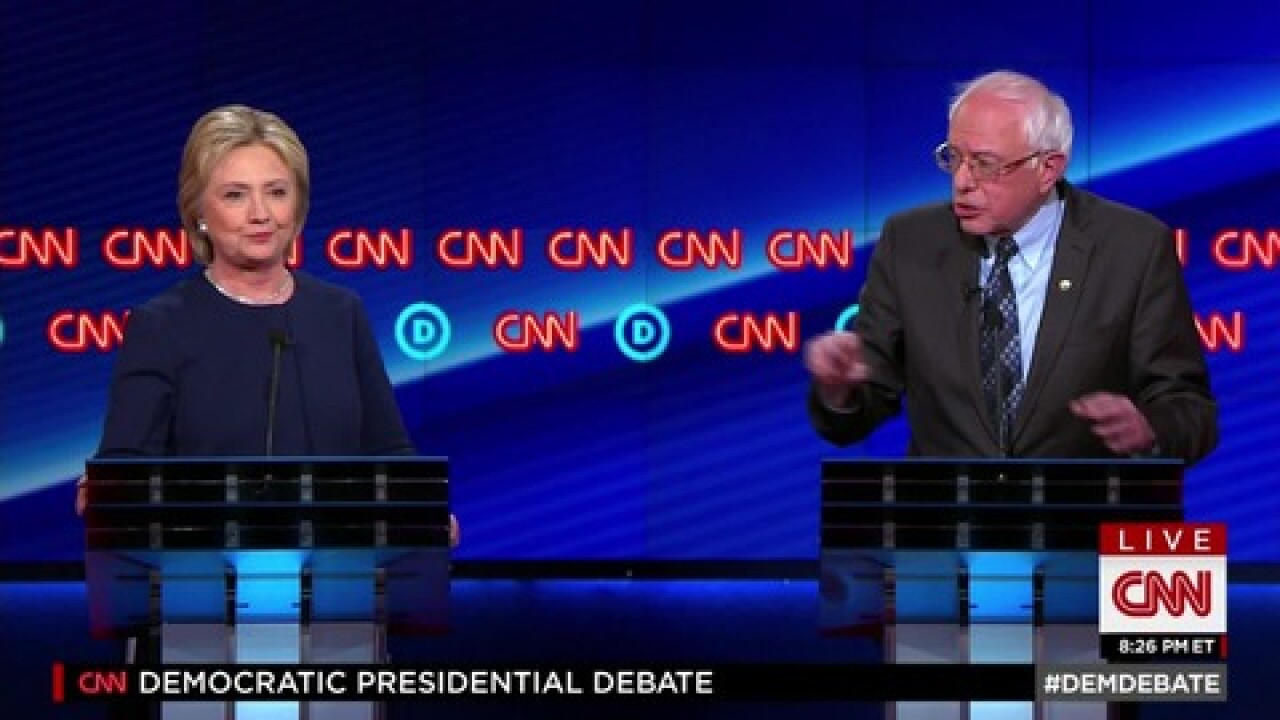 FLINT, Michigan — Hillary Clinton and Vermont Sen. Bernie Sanders met in Flint, Michigan, on Sunday, and CNN’s Reality Check Team spent the night putting their statements and assertions to the test. The team of reporters, researchers and editors across CNN selected key statements and rated them true; mostly true; true, but misleading; false; or it’s complicated.

Clinton said, “On average, 90 people a day are killed by gun violence in our country.”

According to data from the Centers for Disease Control and Prevention, there were 33,599 people killed by firearms in 2014, the latest year for which the data is available. That shakes out to about 92 people killed by a firearm each day.

However, the number includes suicides, unintentional deaths and incidents with undetermined intent as well as violence-related firearm deaths (homicide and legal intervention). In 2014, 11,409 people were killed in gun violence-related deaths by homicide or legal intervention. The CDC reports 586 unintentional deaths by firearms that year, and they also report 270 deaths where the intent was undetermined.

Suicides accounted for almost two-thirds of the deaths by firearms.

More than 90 people did die each day in 2014 from a firearm injury. However, the number of people killed from violence-related homicides and legal interventions in 2014 was much lower — 11,675 people, or almost 32 people a day.

Speaking about the mass shooting at Sandy Hook Elementary School, Hillary Clinton said, “I want people in this audience to think about what it must feel like to send off your first-grader, little backpack maybe on his or her back, and then the next thing you hear is that somebody has come to that school using an automatic weapon, an AR-15, and murdered those children.”

Lanza brought three guns into the school and left one in his car, according to search warrants and a statement from a top prosecutor.

– A semiautomatic Bushmaster XM-15 rifle, which is a brand name of a type of an AR-15, was the primary rifle used;

– And a 12-gauge shotgun that Lanza left in his car.

All of the weapons were purchased legally by Lanza’s mother, who Lanza shot and killed at their home before the shooting at Sandy Hook.

When the trigger of an automatic weapon is pulled, the gun will constantly fire bullets until pressure is removed from the trigger, or until the magazine is empty. In semiautomatic mode, only one bullet is released when the trigger is pulled. To fire another bullet, the trigger must be pulled again.

Clinton says that Lanza used an automatic weapon, when the AR-15 used by Lanza was a semi-automatic.

Reality Check: Clinton on working with Obama to reduce lead

Clinton said that lead poisoning and safe drinking water were issues that she sought to spotlight when she was in the Senate. “I worked with then-Senator Obama to get more money, more support to do more to remove lead,” Clinton said.

Before they ran against each other in the 2008 presidential campaign, Clinton and Obama did work as a team to address the hazards of lead contamination.

In 2005, Clinton and Obama introduced the Home Lead Safety Tax Credit Act, which offered a credit of up to $3,000 to help low income families cover the cost of renovations in aging homes with lead-based paint. The measure was read twice and sent to the Senate Finance Committee.

A year later, they co-sponsored the Lead Poisoning Reduction Act of 2006, which called for $42.6 million in grants to reduce lead hazards in child care centers, Head Start facilities and kindergarten classrooms. The bill went to the Committee on Environmental and Public Works.

That same year, Clinton and Obama called on the Environmental Protection Agency to step up its efforts to enforce the Safe Drinking Water Act nationwide after the Government Accountability Office issued a report warning that federal regulators were not being provided with sufficient data about community water systems.

Finally, in 2008, Obama and Clinton co-sponsored a bill to create stricter EPA standards for repair work on buildings with lead contamination. The measure, which was referred to the Committee on Environmental and Public Works, would have provided grants to fund training for contractors working on buildings with lead-based paint.

Although the bills introduced by Clinton and Obama didn’t get very far in Congress, she did work with him to draw attention to the issue.

As further proof of the water crisis in Flint, Sanders pointed out that the city’s residents pay three times more for their water than he does in his hometown of Burlington, Vermont.

Sanders and his neighbors in Burlington pay about $320.83 annually for 60,000 gallons of water, which is the average household use in the United States using the city’s current water rate.

The residents of Flint payed an average of $910.05 for their annual water usage of 60,000 gallons of water in 2015, according to a study published by the Food & Water Watch group, a nonprofit advocacy organization.

That study found residents of Flint were paying the highest water bills of 500 communities nationwide in 2015.

Clinton and Sanders battled over trade policy, but both slammed the North American Free Trade Agreement, with Sanders saying it had cost 800,000 U.S. jobs.

Sanders said, “Secretary Clinton supported virtually every one of these disastrous trade agreements written by corporate America. NAFTA, supported by the secretary, cost us 800,000 jobs nationwide, tens of thousands of jobs in the Midwest, permanent normal trade relations with China, cost us millions of jobs.”

NAFTA, the free trade agreement between the Canada, Mexico and the U.S., came into effect in January 1994.

During Bill Clinton’s presidency, Hillary Clinton said NAFTA was “proving its worth” in 1996. So she did indeed support NAFTA, though she has since criticized the trade deal, saying during the 2008 campaign that “NAFTA was a mistake to the extent that it did not deliver on what we had hoped it would.”

In 2011, the Economic Policy Institute, a left-leaning think tank, conducted an analysis that argues NAFTA cost 692,000 American jobs. This number is relatively close to Sanders’ figure.

Bill Clinton claimed that NAFTA would create an “export boom to Mexico” that would create 200,000 jobs in two years and a million jobs in five.

On the other hand, the U.S. Chamber of Commerce credits NAFTA for helping to create hundreds of thousands of jobs.

However, most analyses of NAFTA do not approach anywhere near those numbers.

In 2004, the nonpartisan Congressional Research Service conducted an analysis that found that NAFTA had “little or no impact on aggregate employment.”

The numbers are debated, but 800,000 lost jobs is certainly not a widely agreed-upon figure.

An argument over the little-known Export-Import Bank erupted during debate.

It’s true that about 75% of the funding went to larger businesses. The bank’s most recent annual report showed that small businesses received 24.5% of total authorizations in fiscal 2015. (The bank also pointed out that 89% of transactions directly benefited small business exporters.)

Looking at the data of funding the bank paid out in fiscal 2015, just over 40% went to Boeing.

The Export-Import Bank is one of the few areas where Sanders and conservative Republicans have found common ground.

Verdict: It’s true that three-quarters of the Export-Import Bank’s funding goes to larger companies, though it’s not known if all are profitable. Sanders’ claim that Boeing received 40% of the funding is also true.

Reality Check: Sanders on white and poor in U.S.

Asked about race, Sanders said white Americans don’t understand what blacks go through in this country.

Actually, there are far more poor whites in the U.S. than poor blacks.

Here are the figures on Americans living in poverty from 2014, the most recent data available from the Census Bureau:

The share of blacks in poverty (26.2%) is much higher than the share of whites (10.1%). But there are certainly many whites who know what it’s like to be poor.