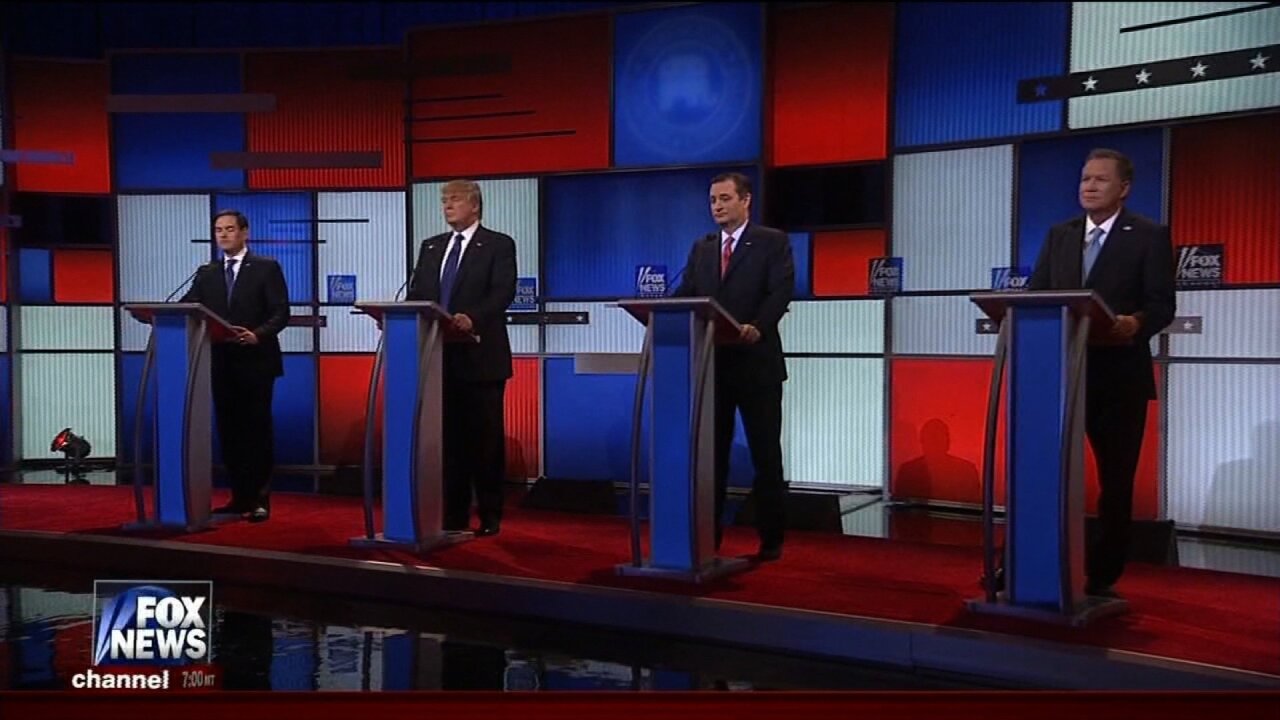 John Kasich at the Fox GOP Debate in Detroit, Michigan on March 3, 2016.

Donald Trump opened the GOP debate here by boasting about the size of his genitals. He responded to recent comments from Marco Rubio in which the Florida senator joked about the size of Trump’s hands and said “you know what they say about men with small hands.”

On the debate stage, Trump stretched his hands out for the audience to see — then insisted that the suggestion that “something else must be small” was false.

“I guarantee you there’s no problem,” Trump said to howls from the audience at the Fox debate.

It was perhaps the most surreal moment yet in a presidential race that has already been dominated by unprecedented drama and personal attacks. Trump went into the debate after spending the day in a heated war of words with the party’s 2012 nominee, Mitt Romney.

Romney, who has blasted Trump for days, delivered a sharp condemnation of Trump earlier Thursday — a deeply unusual move for a former presidential nominee.

“Here’s what I know: Donald Trump is a phony, a fraud,” Romney said in a speech in Salt Lake City. “His promises are as worthless as a degree from Trump University. He’s playing members of the American public for suckers. He gets a free ride to the White House, and all we get is a lousy hat.”

He hit back during the debate, calling Romney an “embarrassment” to the GOP.

“He was a failed candidate, he should have beaten President Obama very easy. He failed miserably and it was an embarrassment to everybody,” Trump said. “I guess obviously he wants to be relevant, he wants to be back in the game.”

During a rally in Maine earlier Thursday, Trump blasted Romney for “begging” for his endorsement.

“I don’t know what happened to him,” Trump said. “You can see how loyal he is. He was begging for my endorsement. I could have said, ‘Mitt, drop to your knees.’ He would have dropped to his knees.”

With Trump emerging as the undisputed GOP front-runner, many party leaders and insiders insist he’s not a true conservative. They also worry that Trump’s inflammatory rhetoric on immigration could permanently unravel the GOP’s efforts over the years to reach out to Latinos and other minorities.

But even as Romney and others try to lead the effort to stop Trump, the belated push may only reinforce the real estate mogul’s appeal as his supporters have already shown their deep loathing for establishment figures.

Amid the GOP establishment’s revolt against Trump, all three of Trump’s rivals pledged on the debate stage to support the party’s eventual nominee — even if that ends up being Trump.

Trump — who has repeatedly threatened the possibility of launching a third-party bid should he feel that the party is treating him unfairly — also said he would back whoever the party crowns.

The debate comes as the GOP field is quickly winnowing. When Trump took the debate stage for the first time in August, 17 candidates were seeking the Republican nomination. Eight months later, Trump is the undisputed front-runner and is on stage with just three rivals: Rubio, Ted Cruz and John Kasich.

The candidates met two days after Trump dominated the Super Tuesday contests, notching seven victories and picking up hundreds of new delegates. Cruz, who kicked off the GOP primary season by winning the Iowa caucuses, added three victories on Tuesday, including in his delegate-heavy home state of Texas. Rubio also got his first win of the season, coming in first in Minnesota’s caucuses.

Trump fielded attacks from Cruz and Rubio throughout the night.

Rubio, who is banking on winning his home state of Florida on March 15, went after the GOP front-runner for selling products made in China and Mexico.

Rubio, seemingly amused by the new nickname he’s earned, accused Trump of being incapable of having a substantive policy debate. “You see what happens again when you challenge him on a policy issue?” Rubio said. “The first thing he does is launch an attack on some little guy thing.”

Cruz, as he has done for weeks, also seized the spotlight to hit Trump for having supported and donated money to Democrats in the past.

Trump was put on the spot about a recent report from BuzzFeed that indicated he was flexible on his immigration policy proposals during an interview with The New York Times editorial board earlier this year.

In a revealing moment, Trump didn’t deny that he may be willing to take a softer stance on deporting the millions of undocumented people living in America — an idea that has been central to his hardline immigration platform.

“Sometimes you ask for more than you want and you negotiate down to the point. I may have discussed something like that with the New York Times,” Trump said.

But he insisted that those discussions were off-the-record — an agreement he said he would “honor.”

“I would not do that,” he said when moderator Megyn Kelly asked whether he would release the recordings from the meeting. “I have too much respect.”

Rubio and Cruz called on Trump to release the tapes for the sake of transparency.

“That’s not up to the New York Times. That’s up to you, Donald,” Rubio said.

There was also a tough exchange over Trump’s business record, especially the controversial “Trump University.” Thousands of students signed up for a course that the businessman promised would “teach success,” but there are now multiple lawsuits that claim that the course scammed students across the country while Trump took in tens of millions of dollars.

Trump argued that he is confident he will win these lawsuits, and that “many of the people that are witnesses did tremendously well and made a lot of money by taking the course.” He also claimed to have offered refunds to dissatisfied customers.

Rubio claimed that he spoke to one former student this week, who said they spent thousands of dollars to participate in Trump University, only to get “stuff they can pull off of Zillow.”

“He’s making promises he has no intention of keeping and it won’t just be $36,000 that they’ll lose — it’s our country that’s at stake here,” Rubio said. “He’s trying to con people into give him their vote, just like he conned these people into giving him their money.”

Trump was also on the defensive throughout the evening for changing his stance on issues like the Iraq War and whether to accept Syrian refugees into America.

The real estate developer argued that it is important for leaders to be “flexible.” On why he initially said Syrian refugees should be allowed to enter the United States before changing his mind, Trump said he initially believed that the migration consisted of only a “very small number” of refugees.

“When I first heard the question,” Trump said, “the migration had just started. I was very much like — OK.”

This gave an opening for Kasich, who has been reticent to attack Trump, to make a clear dig at the front-runner.

“Politicians all the time tell (voters) what they want to hear, and then they go to Washington … and they don’t deliver on those promises,” Kasich said.

“There’s a difference between flexibility and telling people whatever you think you need to say to get them to do what you want them to do,” he said.

The colorful zingers continued throughout the two-hour event, with Rubio showing off his improvisational skills.

Trump and Cruz tangled in a heated exchange on nominating conservative Supreme Court justices, with Cruz repeatedly asking Trump to “breathe, breathe, breathe.” Rubio turned to ask the moderators: “When they’re done with the yoga, can I answer a question?”

“You cannot. I really hope that we don’t see yoga on that stage,” Cruz said.

Rubio responded with this joke about Trump: “Well he’s very flexible, so you never know.”