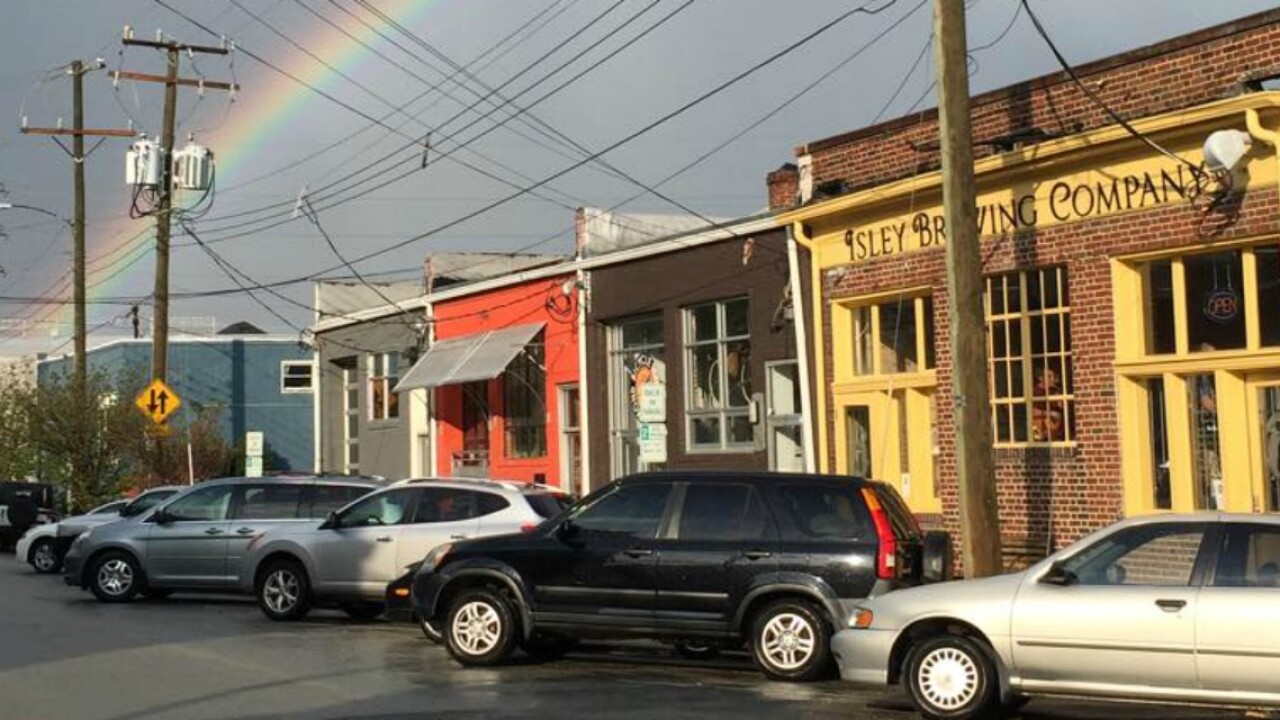 RICHMOND, Va. –Three years ago Scott’s Addition was not the place where people flocked to get pints. Michael Isley was the first craft brewer in the neighborhood; he opened the doors to Isley Brewing Company on Oct. 23, 2013.

Isley said that almost a century before that his grandfather Mr. Winter – business man of the year for five years running in the early 20th century – was busy handling the plumbing and heating needs for 95 percent of the buildings in Scott’s Addition. The family business, still operational to this day as Winter Plumbing and Heating, even originally outfitted his brewery, located at 1715 Summit Avenue.

But Isley Brewing almost didn’t happen in Scott’s Addition. It was place where Isley, knowing “they were going to have around 1,500 units coming in,” wanted to open shop. He sensed a hot break and approached the city about it, at the end of 2011.

“I was told it was never going to happen, it isn’t zoned for it and we don’t plan to change it,” Isley said.

He knew Scott’s Addition would become a place lots of people came home to at night, and he had “high hopes” for it.

Flash forward and Isley’s original idea has certainly fermented. By the end of 2016, the 47-block historic district will boast at least two cideries, one meadery, a distillery and five breweries.

Scott’s Addition is bounded by I-195 to the west, I-95 to the north, Hermitage Road to the east, and West Broad St to the south. The boundaries were changed in early 2015, and now extend past the historic area that was bounded by Boulevard, I-95 and Broad Street.  PHOTO: Scott’s Addition Boulevard Association

A return to the drawing board

If it feels like Scott’s Addition is always in the news lately, well, it is, and the headlines indicate it isn’t just the next big housing market or restaurant hot spot; it has become Richmond’s craft beverage hub.

The Veil Brewing will open at the beginning of April. PHOTO: Matt Tarpey

Just last week, in one day, came news that Blue Bee Cidery would relocate from Manchester to Scott’s Addition and triple production of its award-winning cider, to over 100,000 bottles annually.  Earlier that same day two well-known restaurant owners announced their new 10,000-square-foot property on Broad Street may be home to another brewery.

Even if they don’t go that route, by the fall of 2016, there will already be almost one brewery/cidery per every apartment building in the area; based on approximate city data. The data is specific to the 10 converted apartment buildings and mixed-use units built since 2013 and the eight breweries total expected to be operational this year.

Scott’s Addition was originally planned as a residential neighborhood, so some single-family homes existed, but in 1927 the area was zoned for industrial, which became more predominant, according to the National Park Service. The original boundaries were extended in 2015, past Boulevard (see picture above).

The proximity to thousands of new residents was what first enticed Isley to the area, and others have shared that vision.

“We never really had an area in Richmond that you could so easily go from one place to the next,” Isley said.

Correll not only owns a cidery in the neighborhood, he also rents there. He is very much the person with whom businesses hope to connect. He’s under 30, lives in Scott’s Addition and has a passion for the craft beverage industry. So much so that he parlayed his obsession with history and alcohol into a winning proposal for a cidery.

“They like to connect to the people who make their product,” he said of the demographic.

The area now practically has one brewery per apartment building

While it’s hard to get a total census count for the area, there are just over 1,134 apartments planned, with a reported 1,110 complete, according to Scott’s Addition Boulevard Association data.

For every 137 apartments, there is a craft brewer. If you took a stab at population, and estimated 3,500 residents, then there would be a brewery (including cideries and meadery) for approximately every 437 residents in Scott’s Addition.

The most concise number to take away is almost a third of all the beers or ciders produced in the Richmond-metro area (city, Henrico, Chesterfield, Hanover, Goochland) are made in Scott’s Addition.

There will soon be 15 breweries/cideries (and a meadery) open in Richmond city, and a total of 26 breweries open in the metro-area. More than half of all the breweries in the Richmond-metro area are in the city.

Ardent Craft Ales, Black Heath Meadery, and Isley Brewing are already open in Scott’s Addition. Reservoir Distillery has been producing  whiskey in the neighborhood since 2009, and recently opened a tasting room at 1800 Summit Avenue. Within the next two months, Buskey, Veil and Three Notch’d plan to open. Vasen Brewery and Blue Bee Cidery will open in fall 2016, maybe sooner for Blue Bee.

Outside of Scott’s Addition, Castleburg Brewery, on Ownby Lane near Hardywood, has an April opening planned. Stone Brewing has opened already but is not selling beer brewed in Richmond, yet. Outside of the city, on Midlothian, Steam Bell Beer Works has a spring opening planned. Kindred Spirits in Goochland hopes to open in May.

“To this day people ask me about my favorite craft beer and I say Legend Brown,” Isley said. “Their beer has never been more phenomenal.”

Legend mostly owned the market since opening in 1994. Since then their pub has expanded, as has their reputation and reach.

Senate Bill 604, passed in 2012, shook up things, and allowed breweries to serve beer without selling food. It is considered to be the reason why there has been a state-wide industry boom.

“It has been a financial motivation for all of us to open,” Isley said.

It was a year after SB 604 passed that David Hunter started the Fans of Virginia Craft Breweries on Facebook. He was hooked on Virginia craft beer after trying Midnight Brewery’s Rockville Red. He invited 50 of his friends to join his Facebook group in March  2013 and now the page has almost 8,000 members statewide.

“There were four breweries in Richmond at the time [SB 604 passed] now we’re in the teens, with many more on the way,” Hunter said.

He believes there is of plenty room for more breweries.

“As I visit the breweries there doesn’t seem to be a shortage of fans enjoying the beer in the tasting rooms,” he said. “Breweries are expanding, buying more equipment, bottling lines, building new or moving to larger facilities.”

Currently, within Richmond’s 60 square miles, there is almost one brewery per 10,000 people. That’s based on 2010 Census data that excludes people under the age of 20. It’s one brewery per 10, 413 persons. Within a two mile radius there are 11 breweries.

But there are numerous reasons that give Scott’s Addition just the right gravity for business.

Scott’s Addition has always been a place where things are made, as Mayor Jones recently pointed out. Even Legend considered a move over to the area, having bid on the old city stables that Blue Bee will soon call home.

“The basic reasons that started the move are the zoning, price, and building requirements,” he said. “Breweries are industrial by nature and have industrial needs like: floors that can take a beating and carry a heavy load, bay doors and/or loading docks for bringing in ingredients and shipping out product, and taller ceilings to accommodate the tanks.”

“There are good open spaces to work with and you can layout your system pretty well,” said Isley General Manager Patrick Bisha. “A lot of them [buildings] were easy to take over.”

“It is unique to be able to get a building with drive up, parking, loading dock and built-in foot traffic,” Correll said.

Sure, the buildings are big, not that expensive, and easy to convert, but many brewers also said the appeal is the community.

“There is something exciting about being a cidery near breweries,” Correll said. “We see it as a synergy to have breweries nearby.”

Isley is excited to be joined by so many others brewers. “It is exciting,” he said. “For every door that opens in Scott’s Addition, my traffic increases.”

The 52-year-old Richmond native only expects for traffic to increase to the area, noting that “it is becoming a destination” where people can spend the day.

But with the amount of breweries there are to visit, maybe it is better to call a cab or Uber, or one day hop aboard the BRT Pulse — or perhaps — to sign a lease.

***To open this year

Did we miss one? Is there one that will open this year? We will update this list throughout the year, so send us an email.

*Editor’s note. We deliberated on whether or not to include Stone beer, though their beer will soon be brewed here for its distribution center.  We trust they will be offering up some RVA specific brews, and decided they are more than just a California beer.

**BJs Brewhouse in Henrico doesn’t brew on location. Hardywood and Triple Crossing will both have two locations this year, but were only counted once.