Dominion to media: ‘NO COAL ASH IS GOING INTO VIRGINIA WATERWAYS’ 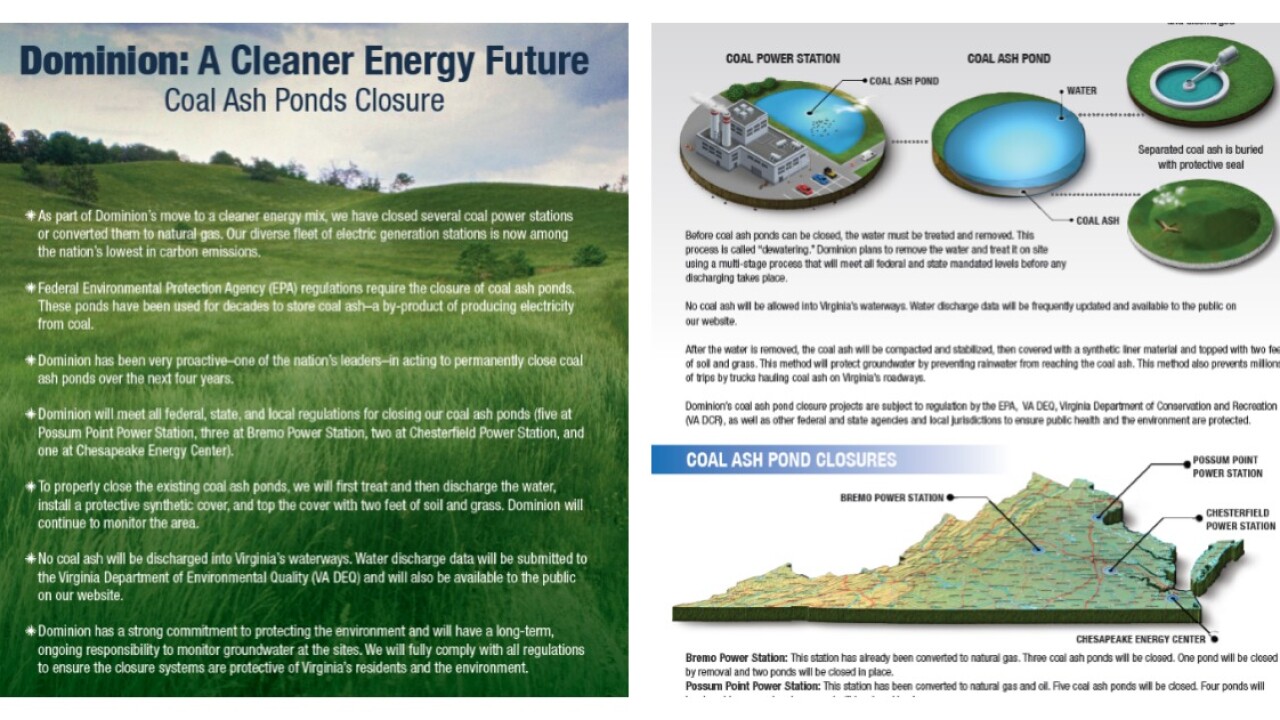 The press release, titled in all caps, NO COAL ASH IS GOING INTO VIRGINIA WATERWAYS,  was distributed to quell any misinformation about their coal ash pond management, a Dominion representative told CBS 6.

CBS 6 has reported extensively on Dominion’s plan to meet the Environmental Protection Agency’s new requirements for the storage of coal ash. The new regulations were implemented by the EPA in 2015. Dominion must clean up the coal ash ponds and close them.

Outcry for the plan came shortly ahead of the State Water Control Board’s vote on Jan. 14, to allow Dominion the permits required to pump waste from the coal ash ponds at Bremo Bluff Power Station in Fluvanna, up river of Richmond and the Possum Point Power Plant in Prince William.

Since then, a petition has been circulated, and the issue continues to be spotlighted.  Dominion and Department of Environmental Quality (DEQ) officials have declared that the plan is safe and up to standard, and the proposed permit has gone through appropriate public comment and revision.

There are several times where the media and concerned citizens have reported that “coal ash” will be going into the waterways.

That’s why they are acquiring water permits.

Next they will need permits to address the stabilization of the coal ash, which will be a solids permit, explained Brad McLane with the Southern Environmental Law Center, in a previous interview.

The hearing for the solid waste permit will be in April.

The remaining two ponds will be closed in place using an engineered cover system consisting of a high density polyethylene layer, covered by 24 inches of soil, and vegetative cover to blend with the existing landscape. The cover system will protect ash from rainfall and protect groundwater, they said.

Dominion maintains that the water will be treated.

“We’ll do this on-site using a multi-stage process according to stringent, government-mandated levels before discharge,” reads the fact sheet.

“We’re working with several firms that specialize in on-site wastewater treatment. Each site is being evaluated individually to select the best treatment process to protect the James and Potomac rivers and other waterways.”

The DEQ and environmental lawyers have acknowledged that the Bremo permit does allow for a “mixing bowl” area downstream of the power plant that will technically violate water quality standards before it is mixed with the James.

The biggest impact will be felt near the plant and along the nearby stretch in Fluvanna, according to McLane. A provision was added that the level of water in the north ash pond can only be lowered by six inches a day.

Environmental groups maintain that the permit allows for discharge on days when the river is low and  that the allowed levels are too high.

“They (Dominion) will have to provide some treatment, but not the level of treatment that we believe should occur and not at what the Clean Water Act suggests if you read the law correctly,” he said.

On behalf of the James River Association, McLane’s organization, the Southern Environmental Law Center, has filed a notice with DEQ and Dominion to appeal the permit.

The established levels can be found in the permit posted on the DEQ site. The information starts on page 13.

“Richmond is downstream enough that if Dominion is complying with their limits, then it is hard to imagine that the impacts of this activity will be felt downstream,” McLane said. “Hopefully, you are protected, based on this amendment; we think there is a very low risk.”

You can read more about Dominion’s plan here.

The company press release was disseminated just moments before a state agency sent a separate press release detailing Dominion’s oil spill into the Potomac which killed 29 animals and fish.  That spill happened at the end of January, 2016, and Dominion claimed responsibility for it on Friday, Jan. 12.

The images below were fact sheets sent to the media.