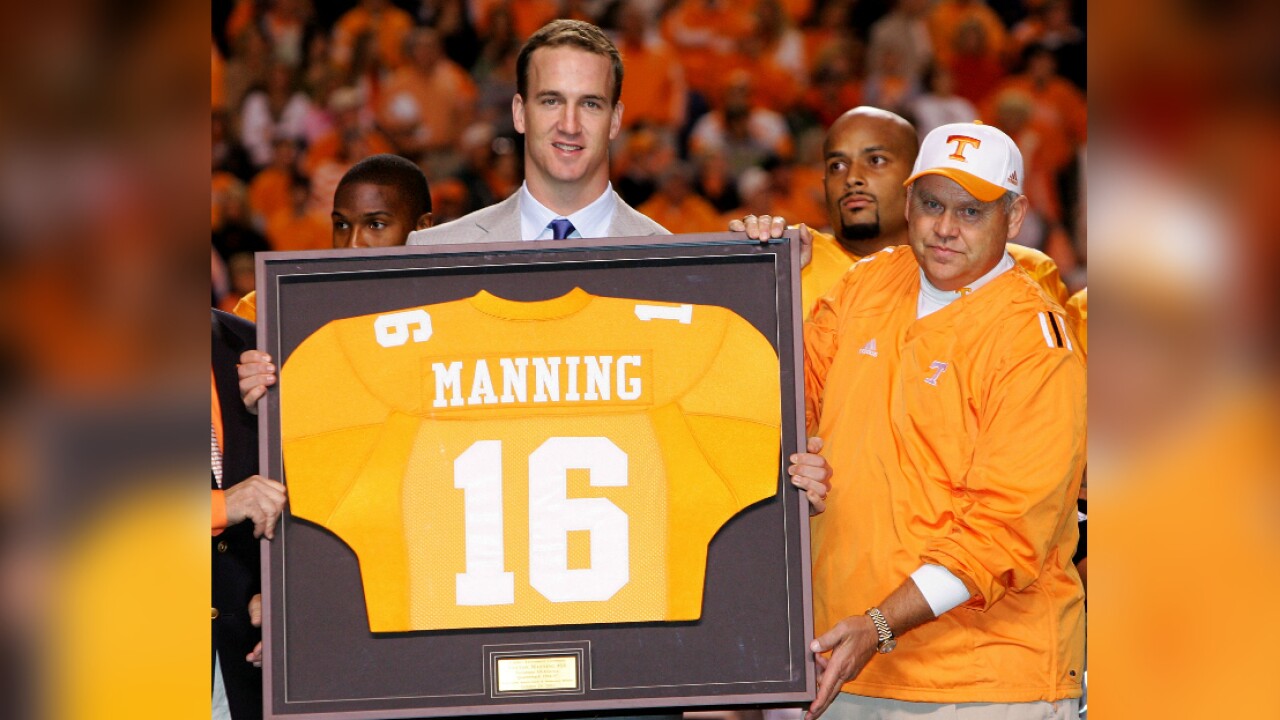 Former Tennesse quarterback Peyton Manning and current quarterback for the Indianapolis Colts is honored alongside his former college coach Phillip Fulmer before the start of the game against the South Carolina Gamecocks on October 29, 2005 at Neyland Stadium in Knoxville, Tennessee. (Photo by Streeter Lecka/Getty Images)

KNOXVILLE, Tenn. — A lawsuit accusing the University of Tennessee of mishandling reports of alleged sexual assaults by student athletes cites a 20-year-old complaint against then-Volunteers quarterback Peyton Manning as evidence of the school’s indifference.

Filed on behalf of six unidentified accusers, the lawsuit alleges that the university violated federal Title IX regulations against sex discrimination and fostered “a hostile sexual environment and culture.”

The university denies permitting a culture of sexual assault to thrive.

The lawsuit was filed in federal court in Nashville last week, two days after Manning led the Denver Broncos to victory in Super Bowl 50. It centers on five alleged rapes of female students reported between 2013 and 2015.

“We came together to change what is done about sexual assault,” one of the accusers, identified in the lawsuit as Jane Doe 1, said in a phone interview.

CNN’s policy is not to name victims of sexual assault or rape.

In support of its claim of “deliberate indifference” by administrators to sexual assaults at the 27,000-student public university in Knoxville, the complaint includes a string of incidents involving student-athletes going back to 1995.

The lawsuit accuses the university of a pattern of “grossly inadequate discipline and resolution in favor of male, ‘major sports’ athletes.”

One incident listed as an example in the lawsuit is a 1996 sexual assault complaint against Manning by the university’s first female associate trainer, who is not a party to the current case. Manning would lead the Volunteers to an SEC championship one year later.

The lawsuit is about the university’s systemic problems in handling sexual assaults, with mention of the Manning complaint “simply a backdrop to the institutional issues,” attorney David Randolph Smith, who represents the five accusers, told CNN on Wednesday.

“The issue is how the university is handling sexual assault claims today, but the history has some relevance,” said Smith, who added that more accusers are expected to join the lawsuit.

In the Manning complaint, then-trainer Jamie Ann Naughright alleged that the nude quarterback “sat on her face” while she treated him for an injury, according to the Title IX lawsuit. The case was settled in 1997 on the condition Naughright leave her position, the lawsuit said.

Naughright later sued Manning for defamation after he, in a book, described the alleged assault against her as a “crude, maybe, but harmless” incident in which he “dropped the seat of my pants” and “mooned” another athlete. He said Naughright “had a vulgar mouth,” and that allowing women in the locker room was “one of the most misbegotten concessions to equal rights ever made.”

Manning wrote: “I admit that even in the context of ‘modern’ life, what I did to offend this trainer was inappropriate. Not exactly a criminal offense, but out of line.”

CNN has been unable to reach Manning’s representatives for comment.

Bill Polian, the former Indianapolis Colts general manager and president who drafted Manning, told ESPN this week that the lawsuit’s brief mention of the old complaint “fits the definition of a smear … plain and simple.” He referred to the accuser as the “so-called or alleged victim.”

“It’s just a question of a person who’s lived a great life, great professional life, contributed to every community he’s ever been in, including the University of Tennessee, where a street is named after him,” Polian said of Manning. “And it’s just an attempt to gain notoriety for others by smearing a good person.”

In the five alleged sexual assaults cited in the lawsuit, only two — involving prominent former members of the football team — resulted in criminal charges, Smith said. The men, who are awaiting trial, remained in school. One attended his graduation.

In another alleged assault involving a basketball player, the man transferred to another university after an administrative proceeding determined there was sufficient evidence that the assault had occurred, according to Smith.

The lawsuit claims the university’s administrative hearing process is “one-sided” and “denies victims the rights to a hearing and to the same equal procedural, hearing, and process rights as given to perpetrators of rape and sexual assault.”

Those hearing the complaints are appointed by the university, which also decides all appeals, according to the lawsuit.

Bill Ramsey, a lawyer for the university, said Tennessee officials “acted lawfully and in good faith” in responding to the incidents mentioned in the complaint.

“Any assertion that we do not take sexual assault seriously enough is simply not true,” Ramsey said in a statement. “To claim that we have allowed a culture to exist contrary to our institutional commitment to providing a safe environment for our students or that we do not support those who report sexual assault is just false.”