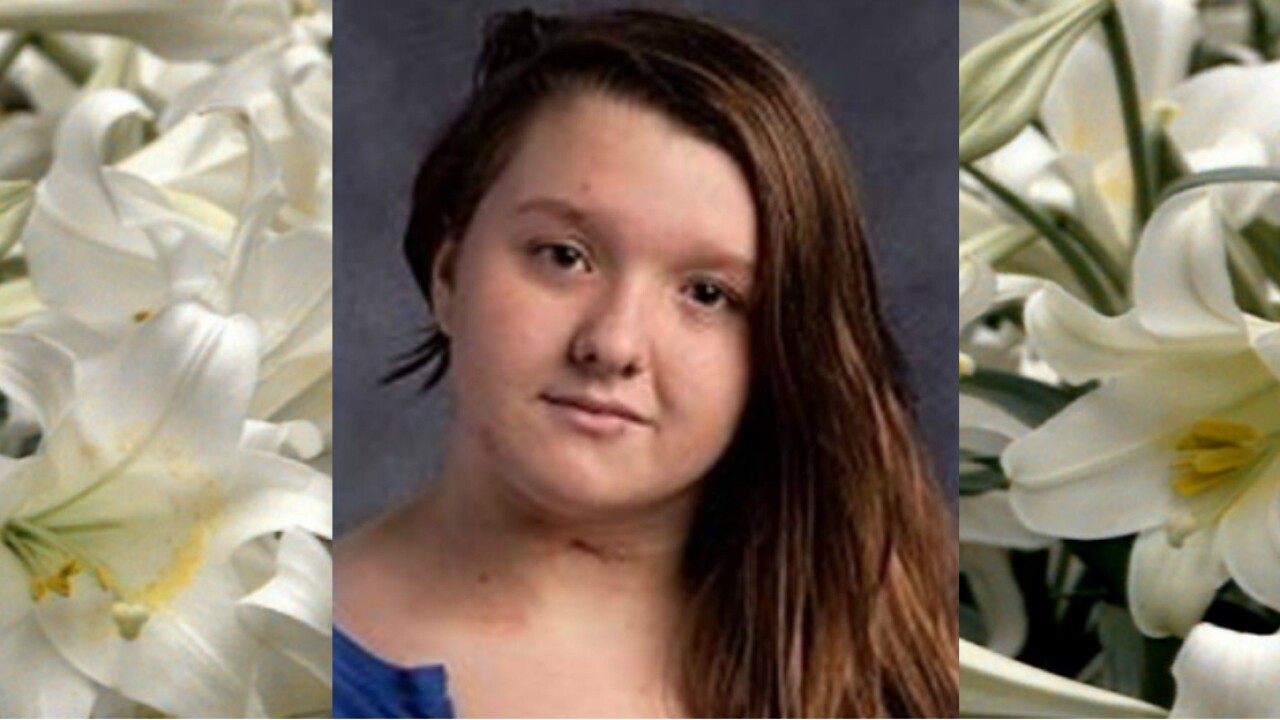 The stuffed bear, a bright-red heart adorned with stitched Xs and Os in its lap, serves as a sort of anchor for a sprawling memorial to the cherub-cheeked girl known as Coley — tributes in the form of construction-paper hearts of every hue, bouquets, handmade cards, a pencil sketch of Nicole and almost 150 remembrances jotted down in child’s script.

“Nicole, you had a smile for everyone and love to match. We all love you and will miss you greatly. May the Good Lord bless you and your family,” read one reminiscence.

“You can’t spell Lovell without love,” proclaimed a card beneath it.

“You always looked on the BRIGHT side!” chimed another.

“I never knew Nicole that well, but she always seemed so sweet. There are no words to describe how sad it is that she is now gone. R.I.P. Nicole.”

If Nicole were the subject of bullying in school or online, there is no evidence of it here.

Instead, it appears even those who didn’t know her appreciated the positivity and fortitude that no doubt helped her survive a liver transplant, MRSA and lymphoma at the far-too-young age of 5.

‘It’s been a somber week’

The memorial, which sits in the wing where Nicole took her core classes, has been growing daily since students arrived Monday to find an eerie empty seat in their classrooms, said Montgomery County Schools spokeswoman Brenda Drake.

Markers sit on a table, inviting the students — many of whom have been wearing Nicole’s favorite color, blue — to expand the memorial as they see fit.

Soon, the memorial will be delivered to Nicole’s mother, Tammy Weeks, and replaced with a redbud or cherry tree, which will be planted on campus in Nicole’s honor, said Drake, who wore a blue ribbon bearing a silver serif “N.”

Just two days before returning to school from the weekend, most of Nicole’s friends and peers learned their classmate had been killed, and that two freshmen from nearby Virginia Tech had been arrested in connection with what police say is a gruesome murder.

Nicole met David Eisenhauer, an 18-year-old member of the university track team, via social media, authorities allege. Details are sparse, but Kik, the popular smartphone messaging app, said in a statement that it had cooperated with the FBI in its investigation.

Eisenhauer allegedly engaged in an inappropriate relationship with Nicole, a law enforcement said without elaborating, and when Nicole planned to expose that relationship, he killed her to prevent the secret from surfacing.

“It’s been a somber week at Blacksburg Middle School,” Drake said. “We’ve got some extra resources there at the school to help them begin that grieving and mourning process, allowing them to have some space and time to really think about what has happened, allowing them to find that new sense of normalcy.”

‘They’re working through it’

Seven counselors have been brought in to support the three already on the staff. “Safe places” with trained personnel offer students unable to return to their classroom routine a haven to commiserate and share their memories.

Those closest to Nicole were identified and taken out of class Monday and Tuesday, Drake said.

“They were given a separate place where they could be also with a trained adult to talk about Nicole and to talk about their feelings and their emotions and what they’re going through,” she said.

It’s important the children return to their routines, but not before they’re ready, or at least before their still-developing minds are able to cope with the sudden loss of a classmate and friend.

“We’re making sure all their emotional needs are met as they work through this process and what it means,” she said. “They’re working through it.”

As is Blacksburg, a town that has too often made headlines for brutal slayings, whether it’s the 2009 rape and murder of 20-year-old Morgan Harrington, or the 2007 Virginia Tech massacre that left 32 dead.

At the Lantern Ridge apartment complex, from which Nicole reportedly absconded on the night of her death, a few residents milled about Monday as 3-foot-high piles of snow melted in the corners of the parking lot. Those speaking to CNN said they didn’t know the girl. A man leaving the complex’s laundry room said only that he’d seen plenty of media around and declined to speak.

On Tuesday, a woman smoking near the laundry room said she knew Nicole but didn’t want to be interviewed or identified.

“She was a sweet little thing, loved to be in the pool,” she said, nodding toward a snow-lined green tarp covering the complex’s swimming pool. “That’s all I’ll give ya.”

Down a short footpath and across the parking lot is the two-story, white-siding-clad apartment where Weeks lives. Police, including Blacksburg’s Chief Anthony Wilson, have been in and out of the domicile all week.

As reporters came and went, a bicycle and bright-yellow Tonka truck rested on the porch, and a small bouquet of flowers sat atop a cafe table.

Weeks and other family members have understandably declined most media requests, including a plethora of overtures from CNN. On Monday, a woman answering the door promised to pass along a message. The following day, a Blacksburg police officer answered the door and said the same.

Roughly a mile and a half away, on Virginia Tech’s 2,600-acre campus, reticence was, too, a theme.

Outside the towering, rough-hewn stone facades of Lee and West Ambler Johnston residence halls, where suspects Natalie Keepers and Eisenhauer lived, respectively, students were reluctant to speak on or off camera.

Of 20 students approached outside the halls, only one agreed to speak on the record. She lived in neither dorm.

Students told CNN the situation was “sad” and that Virginia Tech students were nice people, but when asked to go on record, they declined.

A bespectacled female student said someone had told her and her dorm mates not to provide comments to the media. Pressed on exactly who told her not to speak, she made a face as if she’d said too much.

“People,” she replied and continued into Lee Hall.

The head of a university robotic sailing group, of which Keepers was a member, said something similar.

“I have been advised as such: All media should be told they must get their information” from university relations, Jose Gonsalves, commodore of the Virginia Tech SailBOT team, said in an email.

University spokeswoman Tracy Vosburgh said that directive did not come from her office.

“We do not instruct our students in regards to the media. Our campus is open and media have been on campus this week with no permissions or restrictions from my office,” she said.

Regardless, the presence of a reporter Tuesday outside West Ambler Johnston Hall made students anxious enough to call police.

Two campus officers approached a CNN reporter and told him they’d received calls from concerned students. The reporter was “doing nothing wrong,” they said. They politely reminded the journalist to stay out of the residence halls, a point already made clear by signs in the dorms’ windows instructing media to direct questions to Blacksburg police.

Hanna Humphreys, 19, lives two buildings away and was on her way into “West AJ,” the dorm’s nickname, to mail a letter to her brother in the Coast Guard.

“It’s difficult to think people representing our school could do that on the side,” the sophomore said. “I think we all have weird jitters because of it. … It’s hard to think about. Students here don’t give me that vibe. I’ve never been scared to walk around campus, not even at night.”

When news of Nicole’s disappearance first broke last week, Humphreys didn’t consider that Tech students might be involved. Blacksburg is a tight-knit community, part of the reason the Newport News native chose the school. The girl’s slaying has many of them upset and disappointed, she said.

That won’t stop Humphreys from walking on campus at night, and it won’t change how she carries herself in general, she said. Just like the shooter who killed 32 people never represented the student body in 2007, Eisenhauer and Keepers — if they’re guilty — don’t represent the 31,000 students on campus today.

“I don’t know how to say it without saying they’re bad people. They just don’t represent us. It’s just not us,” she said. “They aren’t real Hokies to me. That’s not what we do.”

Another thing Hokies don’t do? Forget. They hold vigils every April in honor of the 2007 victims. At the edge of the school’s drill field, 300-pound “Hokie Stones” bear the names of the five faculty and 27 students killed at West AJ and Norris Hall.

The tragedy still stings, and maybe it’s that history — if three hours of terror could ever represent a school’s 142 years — that keeps locals and students weary of the attention that high-profile homicides bring.

“Not much to say,” said a bartender at a downtown watering hole when asked his thoughts on Nicole’s death. On the sidewalk outside, senior psychology student Brian Doyle told CNN, “It’s not like Virginia Tech f***ing needs any more bad press.”

At a hotel on the edge of town, an employee was overheard complaining that if Nicole’s death had occurred in Richmond, no one would have cared, but because it involved Virginia Tech, the media have swarmed again to Blacksburg.

In a Monday letter to the editor of the student-run Collegiate Times, Jane Lillian Vance, the faculty adviser for Help Save the Next Girl, a nonprofit founded by Morgan Harrington’s mother, wrote that, like Harrington and the 2007 victims, Nicole’s obituary is brief, “cut like a ribbon.”

Coley was the type to speak out against gossipers and bullies and she “felt sorry for any classmate who acted mean,” Vance wrote. She further waxed on Nicole’s giggle, her enthusiastic eyebrows and her affinity for animals — even Vance’s cats, though she had never met them.

“What are we going to do, to hold together? How can we build and ground a starry legacy for our murdered mountain angel named Nicole? Tell me, what must change?” Vance wrote.

The deaths in 2007, 2009 and 2016 have sparked discussions — on guns, mental health, social media, bullying and violence against women — but no simple answers.

Perhaps there are none. But could the community — and indeed, the nation — take a cue from Coley, the tough little “mountain angel” who defied the odds and maintained a sunny demeanor despite daily medication and cruel kids mocking her tracheotomy scar?

Some of the youngsters scrawling endearments on the school’s memorial seem to think so.

Wrote one, “Your smile lit up the classroom. You were never absent with a smile. You were always positive through rough times.”