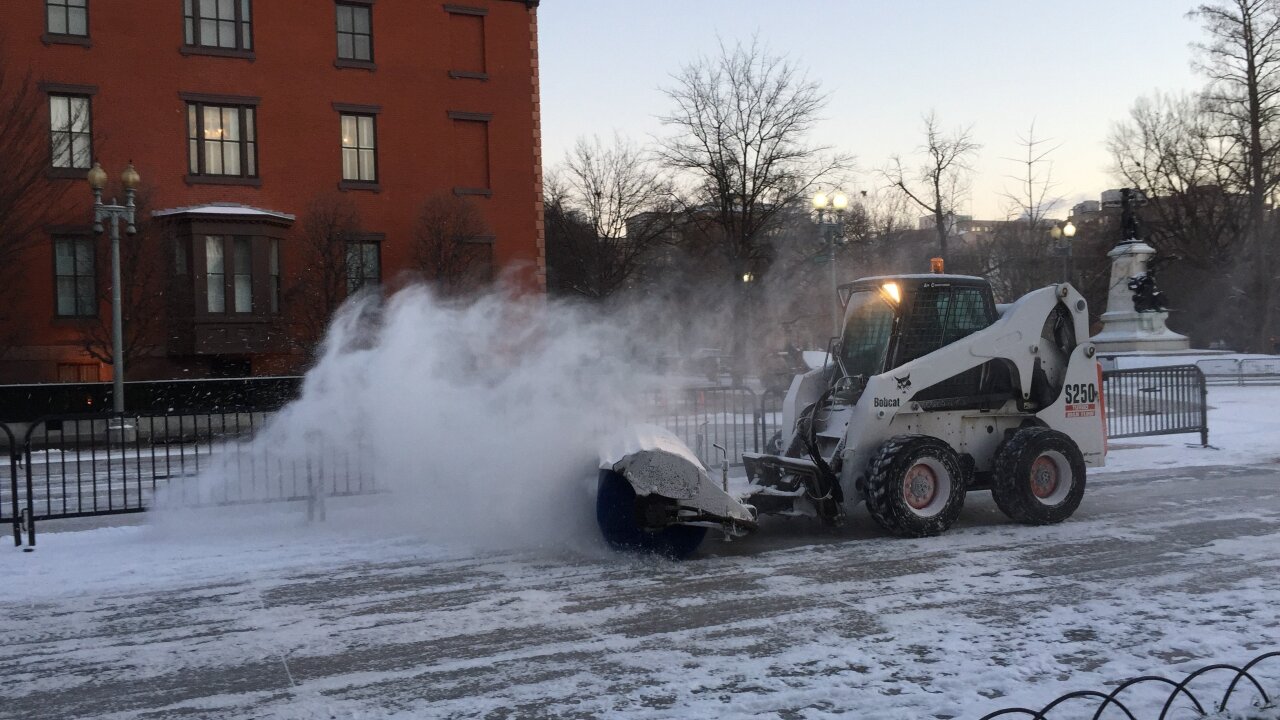 The forecast has promised a blizzard of epic proportions. All indications are that this will be one nasty snowstorm with the potential to dump up to a couple of feet of snow across the DC region. This image of Pennsylvania Avenue shows the clean-up after a wet and icy night in DC.

• American Airlines said it was canceling all flights Friday in Charlotte, North Carolina, and that it would cancel operations in Washington, D.C. and Baltimore on Saturday. Flights were also canceled Saturday in Philadelphia.

• The Washington Metropolitan Area Transit Authority (Metro) announced the Metrorail system would be closed all day Saturday and Sunday.

• Gov. Tom Wolfe has declared a state of emergency in Pennsylvania. “We cannot control the weather, but we can all be prepared for whatever the weather brings us,” he told reporters Thursday. Maryland, Virginia and North Carolina have made similar declarations.

• A 19-year-old man died Wednesday in northeast Tennessee after his car slid off the road “due to weather and speeding,” the Knox County, Tennessee, Sheriff’s Office said. Other weather-related fatalities from Wednesday were reported in North Carolina and Maryland.

Communities on the East Coast braced Thursday for what could be the winter’s biggest storm yet — or could peter out, depending on how the system moves and where you are.

About 75 million people are in the storm’s path, with nearly 30 million under blizzard watches or warnings. Severe weather, including tornadoes, could hit Gulf states on Thursday, and some of the country’s most populous cities could see blizzard-like conditions.

There could be winds as strong as 60 mph, coastal storm surges and flooding on top of whatever precipitation will fall. And it could be a lot.

“It’s not out of the question that some localized areas receive over 2 feet of fresh snow,” CNN meteorologist Taylor Ward said.

Washington could see the most. Starting Friday afternoon and into Saturday night, up to 30 inches could fall in the nation’s capital.

Washington Mayor Muriel Bowser asked everyone to stay off the roads so crews could treat them. She apologized on Thursday for the city’s “inadequate response.”

“We believe that we did not provide adequate resources at a time when it could (have made) a difference in last evening’s commute,” she told reporters. “We should have been out with more resources.”

Commutes turned into hours-long affairs. Many drivers didn’t get home until well after midnight.

Even the commander in chief had to reckon with the wintry mix. Video shows President Barack Obama’s motorcade using hazard lights Wednesday as it made its slippery way from Joint Base Andrews to the White House. Obama was unable to fly on Marine One because of the weather.

Thursday morning’s drive was similarly frustrating, as some icy spots lingered, and commuters left early to allow plenty of time for the ride in.

Hope is to be ‘overprepared,’ then ‘underwhelmed’

This dusting may be nothing, compared with the much larger, more powerful system on the way.

States from Oklahoma east to the Atlantic Coast hunkered down Thursday as ice and snow rolled through. Ward, the CNN meteorologist, warned that 1 to 2 feet of snow could fall “from eastern Kentucky across West Virginia, Virginia, Maryland and into southern Pennsylvania and New Jersey.”

Garth Brooks’ concerts have been postponed Friday and Saturday at Baltimore’s Royal Farms Arena “for the safety of all fans and all personnel involved.” The postponement is among dozens of cancellations of shows, classes and more because of the storm.

For many, it’s still up in the air what will fall: Little Rock, Arkansas, for instance could see rain, sleet and even snow thunder overnight in addition to heavy snow, according to the National Weather Service.

Tennessee got hit early, with the Knox County Sheriff’s Office reporting the death of a 19-year-old man after his car slid off the road Wednesday “due to weather and speeding.” North Carolina saw two deaths late Wednesday in crashes along snow-covered roads.

North Carolina Gov. Pat McCrory said his state is doing “everything we can” to get public safety personnel ready in case the worse-case scenarios come true. Several schools, churches and courts around North Carolina had been ordered closed Friday, according to CNN affiliate WRAL-TV.

“Our goal with this potential winter storm … is to be overprepared and hopefully underwhelmed,” McCrory said.

Strong gusts, combined with accumulating snow or ice, could knock out power to many amid subfreezing temperatures — a prospect that Washington’s mayor called “my biggest concern.”

Nearly 2 feet of snow fell in February 2010’s “Snowmageddon” storm, which cut power to hundreds of thousands in the region.

For the weekend storm to be of historic proportions, snow accumulations in Washington would have to top 28 inches. That would exceed the calamitous “Knickerbocker Storm” of 1922, which dumped 28 inches and killed nearly 100 people when the roof of a theater by that name collapsed under the weight of snow.

As of midday Thursday, the greater Washington metro area — from Fredericksburg, Virginia, northward, incorporating all of Maryland — was under a blizzard warning.

“Heavy snow and blowing snow will cause dangerous conditions and will be a threat to life and property,” the National Weather Service warned. “Travel is expected to be severely limited if not impossible during the height of the storm Friday night and Saturday.”

Bowser, Washington’s mayor, has declared a state of emergency, closed schools for Friday and given the OK to move any vehicle found on a snow emergency route.

Residents aren’t taking any chances either, clearing beer, bread and milk from grocery store shelves ahead of the storm.

“They know (the storm is) coming,” manager Roy Washington told CNN affiliate WJLA-TV. “They hear the forecast, and they want to be prepared for it.”

Washington appears to be in the storm’s bull’s-eye, but most of the Mid-Atlantic states — and a few points west — will also take a hit. There’s more uncertainty for Philadelphia and New York, though the latter city’s mayor has ordered some 4,800 sanitation workers charged with clearing streets to go on to 12-hour shifts Friday.

The forecast there calls for snow to start falling overnight Friday, with 7 to 15 inches possible by the end of the weekend.

“The men and women of the Sanitation Department and all our agencies are getting ready right now,” Mayor Bill de Blasio said. “We’re bracing for the first big storm of the winter.”