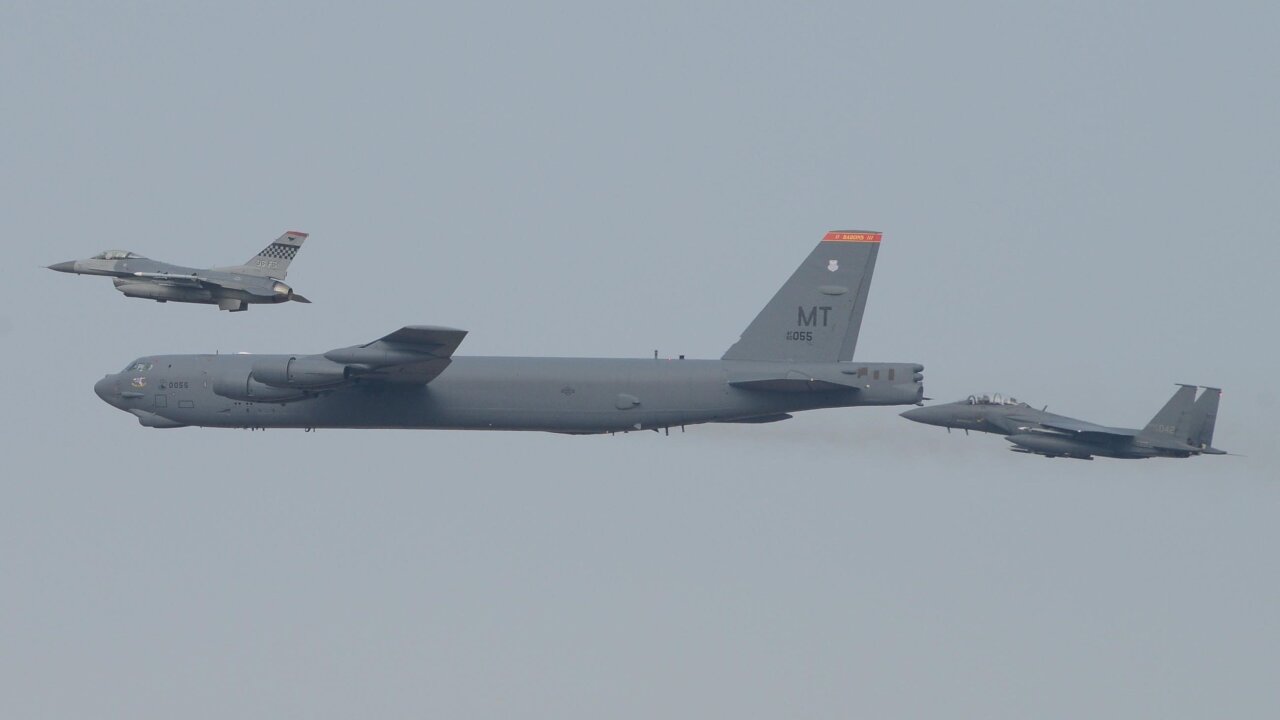 PYONGYANG, North Korea  — Days after North Korea claimed it tested a hydrogen bomb, the United States responded with a display of military might on the Korean Peninsula.

A B-52 bomber jet from Andersen Air Force Base in Guam flew over Osan, South Korea, on Sunday “in response to a recent nuclear test by North Korea,” United States Pacific Command said.

“This was a demonstration of the ironclad U.S. commitment to our allies in South Korea, in Japan, and to the defense of the American homeland,” said PACOM Commander Adm. Harry B. Harris Jr.

The show of solidarity has caught the attention — and likely the ire — of North Korea.

“They absolutely took notice,” CNN’s Will Ripley reported from the North Korean capital.

“A lot of North Korean military commanders find U.S. bombers especially threatening, given the destruction here in Pyongyang during the Korean War, when much of the city was flattened,” Ripley said.

CNN is the only U.S. broadcaster operating in North Korea.

The show of solidarity between the U.S. and South Korea came after Seoul reactivated loudspeakers broadcasting propaganda into North Korea near the heavily fortified border between the countries.

Pyongyang considers the broadcasts tantamount to an act of war, and in the past has responded to them with artillery fire.

North Korea bragged about the “spectacular success” of its first hydrogen bomb test on Wednesday.

But outside the hermit kingdom, the claims have been met with skepticism.

The United States, South Korea, Japan and China have been testing for airborne or ground radiation in the region, but say they haven’t found any evidence supporting the claim of an H-bomb test.

Wednesday’s test yielded a blast of a similar magnitude to a previous North Korean test in 2013, said Martin Navias, a military expert at King’s College London.

“We won’t know for another few days or weeks whether this was (a hydrogen bomb),” he said. “It doesn’t look like one. … One would have expected [the power] to be greater if it was an H-bomb.”

One analyst in Seoul cast doubt on whether enough material could be collected to ever find out definitively what Pyongyang has tested.

“After the third nuclear test (by North Korea in 2013) we couldn’t find any radionuclides. … It means they can shield the test facilities very well,” says Jiyoung Park, a senior research fellow at the Asan Institute for Policy Studies.

According to Norsar, a Norway-based group that monitors nuclear tests, this test took place deeper underground, so it would be harder to monitor radiation and thus determine the type of weapon tested.

The underground test, which happened at 10 a.m. (8:30 p.m. ET Tuesday), corresponded with a magnitude-5.1 seismic event centered 12 miles (19 kilometers) east-southeast of Sungjibaegam, according to the U.S. Geological Survey.

Norsar said that based on the seismic readings, the event was equivalent to less than 10,000 tons of TNT, smaller than those of the atomic bombs used on Hiroshima and Nagasaki, and far less than hydrogen bombs that typically are as potent as millions of tons of TNT.

But the international skepticism surrounding Pyongyang’s H-bomb claim did nothing to dampen the celebratory mood in the North Korean capital in response to the test.

Officials there say the test has triggered an outpouring of national pride.