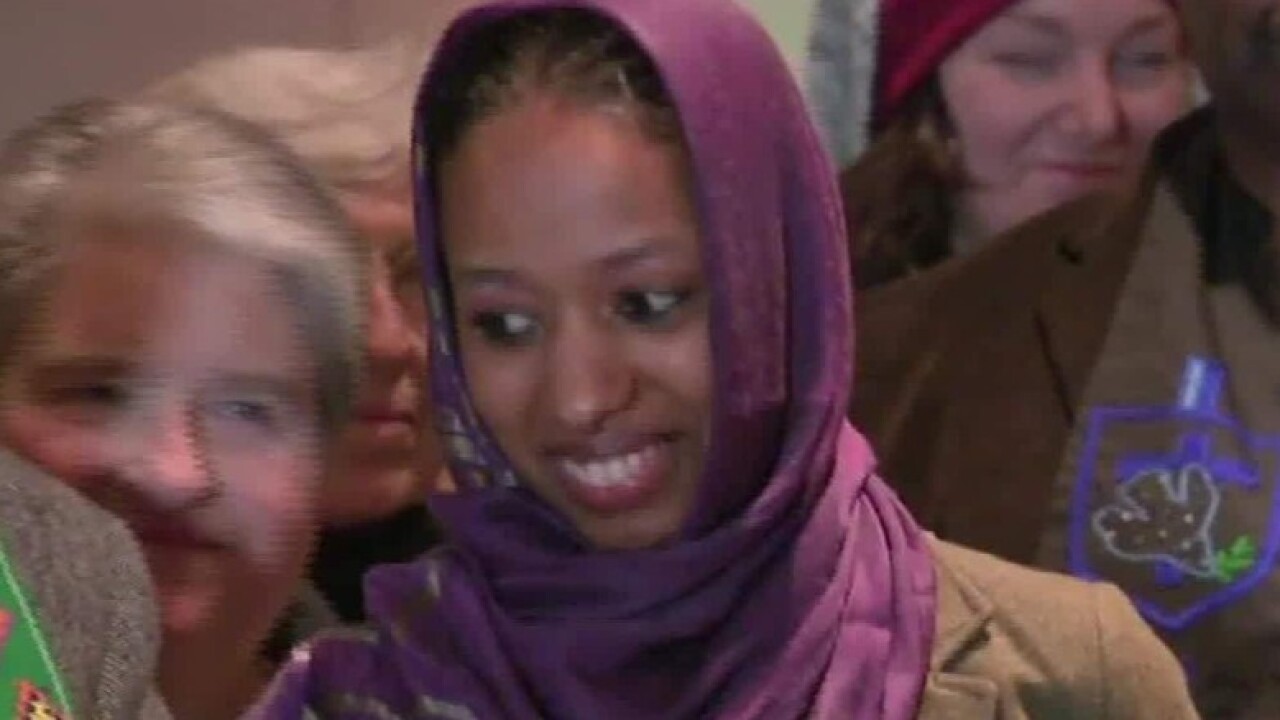 The Wheaton College professor who caused a stir when she donned a Muslim head covering at the Christian school said Wednesday that she will not be intimidated “into cowering in fear of the enemy of the month as defined by real estate moguls, senators from Texas, bigots and fundamentalists of all stripes.”

Larycia Hawkins, who has received a “Notice of Recommendation to Initiate Termination-for-Cause Proceedings” from the Illinois college, spoke at a news conference punctuated by applause and “amens” from dozens of students, colleagues and religious leaders in attendance.

“Wheaton College cannot scare me into walking away from the truth that all humans — Muslims, the vulnerable, the oppressed of any ilk — are all my sisters and brothers and I am called by Jesus to walk with them in their oppression,” she said.

The associate professor of political science was placed on administrative leave December 15 “to explore significant questions regarding the theological implications of her recent public statements, including but not limited to those indicating the relationship of Christianity to Islam,” the school said at the time.

“Wheaton College faculty and staff make a commitment to accept and model our institution’s faith foundations with integrity, compassion and theological clarity,” the school said. “As they participate in various causes, it is essential that faculty and staff engage in and speak about public issues in ways that faithfully represent the college’s evangelical Statement of Faith.”

The school said the action was taken after “Dr. Hawkins declined to participate in further dialogue about the theological implications of her public statements.”

But Hawkins said Wednesday a school official told her the “best scenario” for her return to Wheaton “included two years of multi-layered, ongoing conversation about the theological implications of my Facebook post and my actions in wearing the hijab. For those two years, tenure would be revoked and restoration of tenure an open question at the conclusion of that period.”

The December 19 meeting ended with the message, “Larycia, if you don’t have a lawyer you should get one,” she said. “I read this naturally that my signs at reconciliation had met an impasse and consulted and retained counsel.”

“Wheaton College does liberal arts well yet I am left to ponder how well does Wheaton College treat its employees who dare to challenge students and peers to stand with, not merely for, people outside the Christian cult,” she said.

Her wearing of a hijab, Hawkins said, was “intended to be a way of walking a mile in my Muslim sisters’ shoes. I think that’s Sermon on the Mount Christianity.”

On December 10, just after the massacre in San Bernardino, California, Hawkins posted a picture of herself on Facebook wearing a hijab. She called it part of her Advent worship.

“I stand in human solidarity with my Muslim neighbor because we are formed of the same primordial clay …,” she added. “I stand in religious solidarity with Muslims because they, like me, a Christian, are people of the book. And as Pope Francis stated last week, we worship the same God.”

Hawkins — whose active research projects, according to her official biography, are “the moral framing of the black policy agenda” and “black political churches” — then said that, beginning that night, she would show “embodied solidarity” by wearing a hijab. And she vowed to have it on while on campus, in Chicago, at the airport and in church.

“I invite all women into the narrative that is embodied, hijab-wearing solidarity with our Muslim sisters — for whatever reason,” she added.

“A large scale movement of Women in Solidarity with Hijabs is my Christmas #wish this year.”

“No one’s safe,” she said. “That’s the message Wheaton College should hear. None of my students are safe. None of my colleagues are safe. And it’s beyond actually their Facebook page. If they’re not safe in their classrooms, that’s the end of liberal arts… If no one is safe to teach, then we’re done.”

Shortly after Hawkins had been put on leave, Wheaton College President Philip Ryken suggested his school’s stand didn’t simply have to do with someone putting on a hijab.

“The college has no stated position on the wearing of headscarves as a gesture of care and concern for those in Muslim or religious communities that may face discrimination or persecution,” Ryken said. “We support the protection of all Americans including the right to the free exercise of religion, as guaranteed by the Constitution of the United States.”

That same day, Hawkins posted to Facebook again. She didn’t spell out her reaction to being put on leave, or what she would do next. But, while expressing gratitude to supporters, she gave no hint of backing down.

“Love abounds. And it is redounding to me in countless ways,” Hawkins wrote. “I am honored and humbled to be loved. To be loved by you.”

Her brief message was signed, “Your sister in solidarity with the hijab.”

Wheaton College says the notice is not a termination but the start of a process for tenured faculty members.

During the process, a committee will consider both testimony and evidence and will make a recommendation to Ryken regarding Hawkins’ tenure. He will add his own recommendations.

The final decision will be in the hands of the Wheaton College board of trustees.