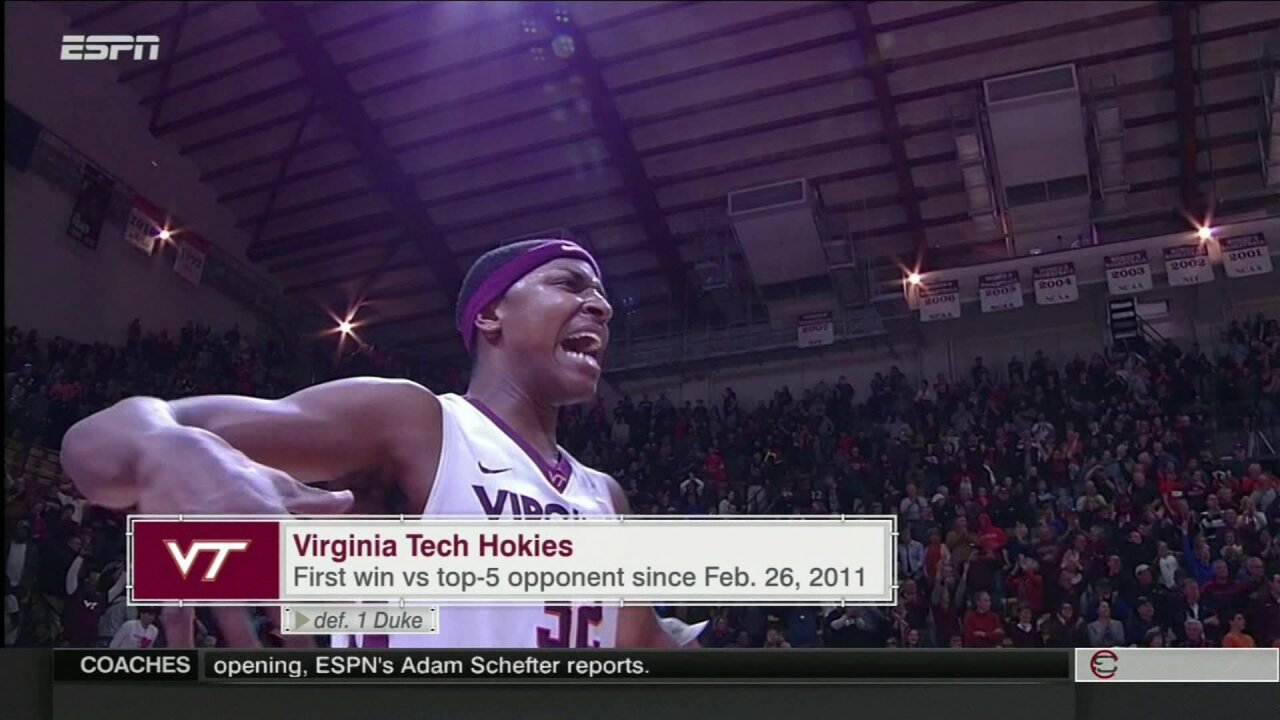 BLACKSBURG, Va. — Virginia head coach Tony Bennett was upset that no foul was called in the closing seconds as Cavalier guard London Perrantes drove to the basket with his team trailing by two points.

But the veteran coach, a former guard in the NBA with Charlotte, was not making excuses after fourth-ranked Virginia lost 70-68 on Monday night to rival Virginia Tech at the Cassell Coliseum in Blacksburg, Va.

“I will let that speak for itself,” Perrantes said of the last play, on the Virginia radio network. “We put ourselves in a hole. We can’t rely on that last play. We will get ready for Georgia Tech. There is nothing we can do about it now.”

“We did not deserve to win,” Bennett said. “We fought back (but) were not sharp.”

It was a rare off night for Virginia, one of the top defensive teams in the country. The Cavaliers also had trouble hanging on to the ball as they made 16 turnovers that led to 26 points for Virginia Tech.

Those numbers are almost unheard of for the Cavaliers, who moved up a spot in the national Associated Press rankings a few hours before tipoff. It was just the third time this season Virginia had at least 10 turnovers in a game.

“Tech did a good job and obviously came away with (the win). We were not sharp on the defensive or offensive end,” Bennett said. “They hit some tough shots. On the road you are going against teams that are desperate to get you in this type of game.”

So can the Cavaliers learn from the loss?

“You have to. You have to have grow (from it) mindset. There is no doubt about that,” said Bennett, whose team lost in Blacksburg for the first time since 2010.

Forward Zach LeDay had 22 points, sophomore guard Justin Bibbs chipped in with 16 and guard Seth Allen had 13 for the Hokies, who got a rare win at home over a ranked team.

“He was definitely the difference maker,” Perrantes said of LeDay, who was three of four from long range while Bibbs was four of five. Virginia Tech was nine of 17 from 3-point range.

Allen made one of two free throws with 7.1 seconds left to give the Hokies the two-point lead. Perrantes drove to the basket but no foul was called in the closing seconds, much to the dismay of Bennett.

Bibbs hit a 3-pointer with 2:59 left as the Hokies, who trailed by four early in the second half, took a 62-56 lead. Moments later, forward Kerry Blackshear made a 3-pointer to give Virginia Tech a 65-56 lead and the Hokies built the margin to double figures before they held off Virginia in a wild ACC contest.

Perrantes caught fire to start the second half and ended up with 22 points but he did not get enough support. Virginia forward Anthony Gill had 17 points and fellow forward Malcolm Brogdon had 15.

Gill hit a 3-pointer to cut the lead to two in the closing seconds by LeDay but one free throw to give the Hokies a three-point lead with 17.4 seconds left at 69-66.

Perrantes made four 3-pointers in the first five minutes of the second half for the Cavaliers, who trailed 26-21 at intermission. He made another 3-pointer with 13:33 left to give the Cavaliers a 41-38 lead. Perrantes entered the game 22 of 40 from 3-point range.

The first half was an ugly one as Virginia shot 36.4 percent from the field while host Virginia Tech was not much better at 37.5 percent. The Cavaliers were uncharacteristically sloppy with the ball in the first 20 minutes with nine turnovers as the Hokies led 26-21 at the break.

The teams combined for only 14 points in the first seven minutes before Gill gave the Cavaliers a 9-7 lead. Bibbs scored eight of the first 14 points for the Hokies.

Virginia cut the lead to 16-15 with 6:51 left in the first half with a basket by Brogdon, who averaged 14 points in six previous games against Virginia Tech. The Hokies did not falter and took a lead of 23-19 on two free throws by sophomore guard Jalen Hudson with 3:23 left in the first half.

Blackshear delivered a three-point play with 39 seconds left to give the Hokies a 26-21 edge. Bibbs had 11 points in the first half. The Cavaliers were four of four from the foul line in the first half while Virginia Tech was five of eight.

NOTES: The Cavaliers return to action Saturday at Georgia Tech while Virginia Tech plays the same day at Duke. … Virginia is 88-54 all-time against Virginia Tech in a series that dates back to the 1914-15 season. … Virginia was sixth in the nation through Sunday’s games in assist-to-turnover ratio at 1.77 and eighth in scoring defense at 59.6 per contest.

By The Sports Xchange