Scientists create new tool to fight spread of the plague 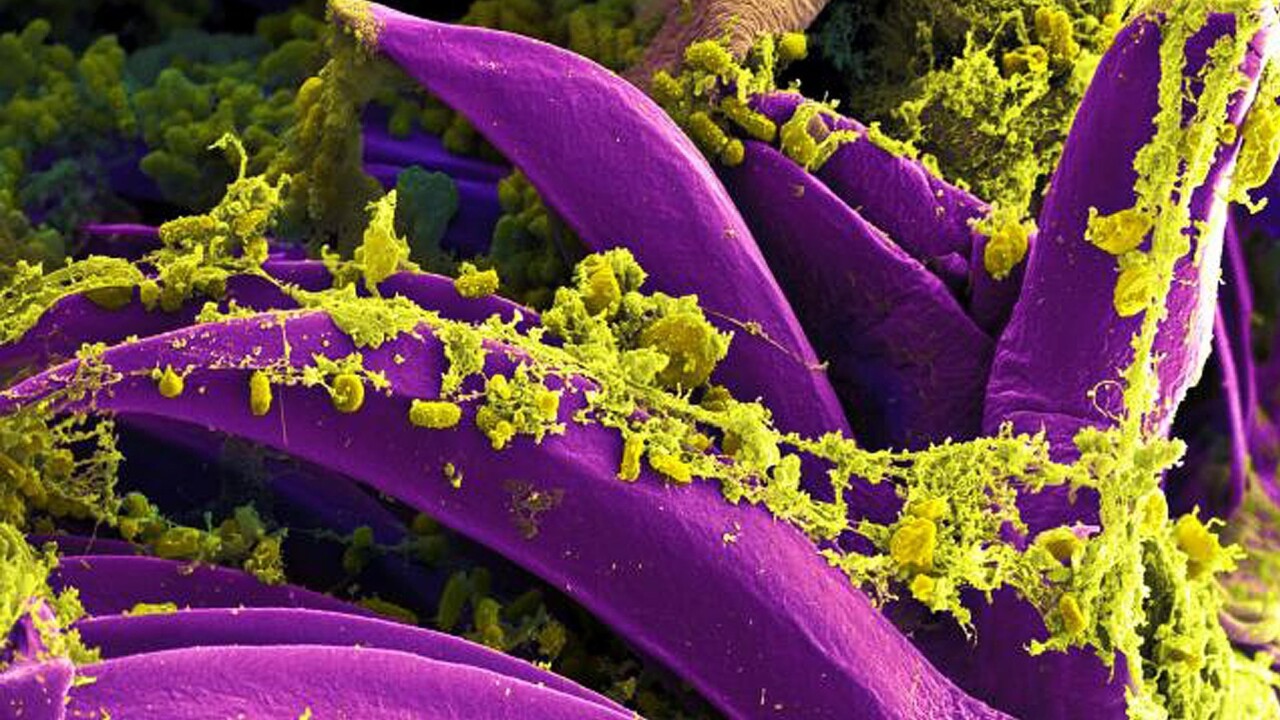 Purple-colored Yersinia pestis bacteria, the bacteria that causes the plague, seen on the spines of a flea. Credit: National Institute of Allergy And Infectious Diseases

Scientists have created a predictive map that may help identify areas of the United States likely to see cases of plague in the near future.

Yersinia pestis, the bacterium that causes the plague, has been around the United States since at least 1900. In fact, the American West still has one of the largest concentrations of plague-carrying animals in the modern world, even though there are far fewer cases of humans catching the disease than in countries with fewer infected animals. Madagascar, Peru, India and the Democratic Republic of Congo have seen the most cases, with the Congo topping the list at more than 10,000 cases from 2000 to 2009.

The plague came to the West Coast via rodents that hitched rides with early industrial ships during the third major pandemic that started in China. These Chinese pests mingled with urban harbor rats. The fleas that bit these rats bit humans, causing the disease to spread. The last plague epidemic in the United States was in Los Angeles in 1924 to 1925. It killed only about a dozen people.

Why we still have plague

Thankfully, with the invention of antibiotics and modern supportive care, a disease that wiped out 60% of the European population in the 14th century has turned into one that you can recover from if caught and treated early.

In August, the Centers for Disease Control and Prevention warned doctors to be on the lookout for it, particularly in the Western United States. This year, there were 16 American cases of plague, an increase from years past. Between 2001 and 2012, there was a median of three cases annually, according to research used in the new study, although the numbers vary from year to year.

Humans in modern times typically get the plague after being bitten by fleas that have come into contact with infected animals, or after their pets, primarily cats, become infected after run-ins with these wild animals.

While zoonotic transmission, meaning when the disease moves from wild animals to humans, is “far less” common in modern times, the authors of the predictive map study say that a “significant plague risk remains” in the West. And the risk to these animals can be substantive. Animals that most often catch the plague include deer mice, the California vole, the California ground squirrel, the rock squirrel, prairie dogs and black-footed ferrets, the study says.

Disease you thought were gone

The latest study, which appears in the journal PeerJ, models the risk of plague using data from between 2000 and August 2015. It uses a computer algorithm to predict where it will spread, taking into account the number of species that may be infected, the climate, altitude and the kind of ground cover available. The plague case data came from the International Society of Infectious Disease using an electronic surveillance system. The data is considered somewhat limited since the number of animal plague cases reported to the system is on the small side, according to the report.

The model seems to suggest that northeastern and southwestern California, central Colorado and north central New Mexico may see future cases. Factors that seemed to be the most influential include the amount of precipitation that fell during the driest and wettest months, altitude, and distance from artificial surfaces. The authors say this is the first model to show that the proximity to artificial surfaces — or surfaces rather than grassland, shrubs, crops or bare soil — played a bigger role.

The authors, who work at the State University of New York Downstate, hope their model will help local health departments better monitor these potential hotspots to prevent the spread of the disease.