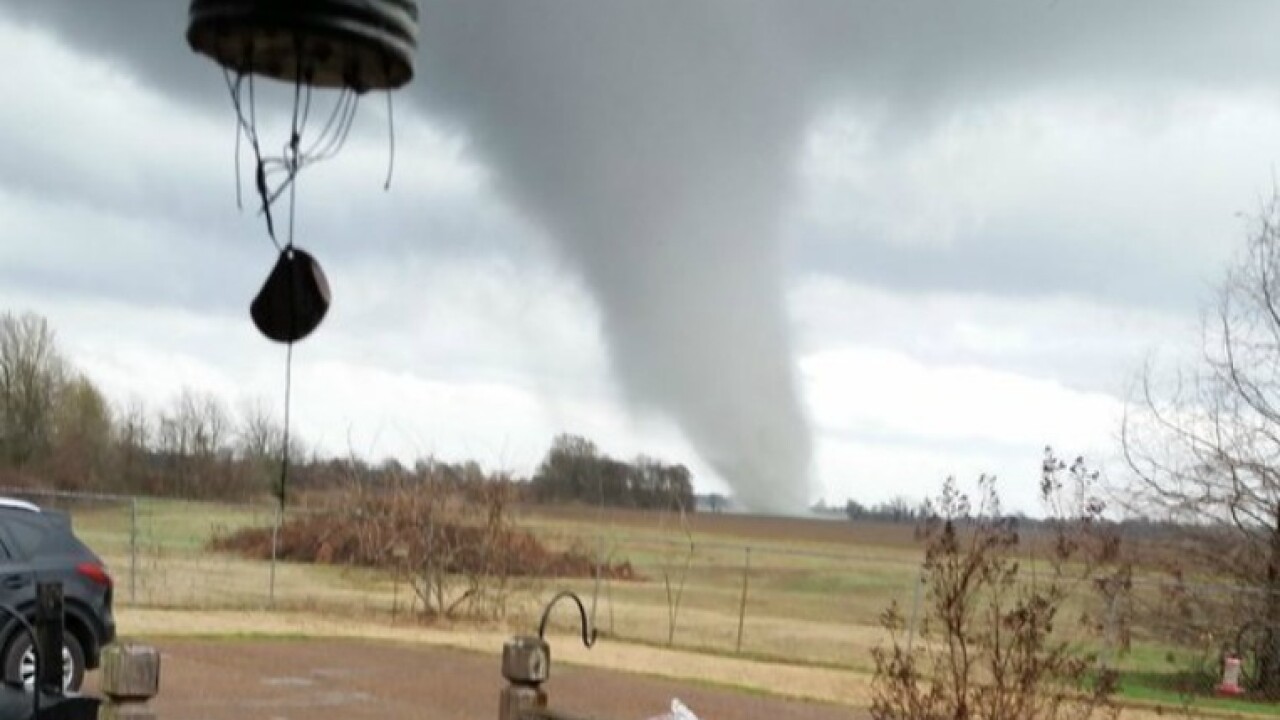 Wiley DeLoach snapped this picture from his backyard in Clarksdale, Mississippi.

On a day when millions of Americans were traveling to see their families and friends for Christmas, wicked storms raced through the South and Midwest, killing at least four people and injuring scores more.

Three people died after a large and extremely dangerous tornado moved through northern Mississippi, authorities said. The tornado touched down near Clarksdale, the National Weather Service said, then the storm system quickly moved through the top of the state and into Tennessee.

The Storm Prediction Center said Wednesday night the greatest risk of tornadoes the rest of the day was to people in middle Tennessee, extreme southern Kentucky, and parts of northern Alabama and northeast Mississippi.

Rain was also falling Wednesday night in states from Alabama to Maine.

Mississippi was anxious to see the storm system finally make its way out of the state.

There were reports of major damage to buildings in Sardis, about 45 miles east of Clarksdale, and in Holly Springs, more than 90 minutes to the northeast.

A 7-year-old Mississippi boy died, Marshall County Coroner James Anderson said. Anderson said the boy was in a car with his family near Holly Springs, where a tornado came through the area. The coroner didn’t have details on how the boy died, but confirmed that it was storm-related.

At least 40 people across six Mississippi counties were injured in the storms, according to Greg Flynn, a spokesman for the Mississippi Emergency Management Agency.

At least four people were injured in the unincorporated area of Coahoma County known as Bellview, Board of Supervisors President Paul Pearson said. One person was in critical condition, he said.

Video from CNN affiliate WREG showed three houses in Como, just north of Sardis, that were badly damaged. Another looked to be a total loss.

Panola County Sheriff Dennis Darby told the Memphis, Tennessee-based station that no one was injured in that area.

“That’s the best news ever, the best news ever,” said Jeanine Hendrix, whose late father built the houses. Her husband was the only person at their home when the tornado hit and blew “tons of Mr. Matson’s house through the yard.”

She said the people who lived in the house that was destroyed weren’t home. She wasn’t sure whether they were out of town.

There was one minor injury nearby, Darby said, to the driver of a tractor-trailer that was blown over on Interstate 55.

Daniel Cole, the county’s director of emergency management told CNN that in a separate wreck another motorist was injured when the tornado barreled through.

“It was on the ground all the way through the county,” said Cole. He added that in the county, which is 800 square miles, two homes had been destroyed and five damaged.

The storms killed one other person. An 18-year-old woman in Arkansas died Wednesday morning when a tree fell through her roof. Four other people in the house, including an 18-month-old, survived. The baby was hospitalized.

The woman died at the scene, the sheriff said. Her name was being withheld while authorities notified her family.