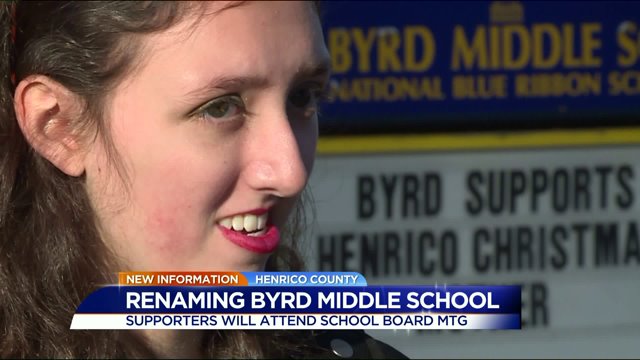 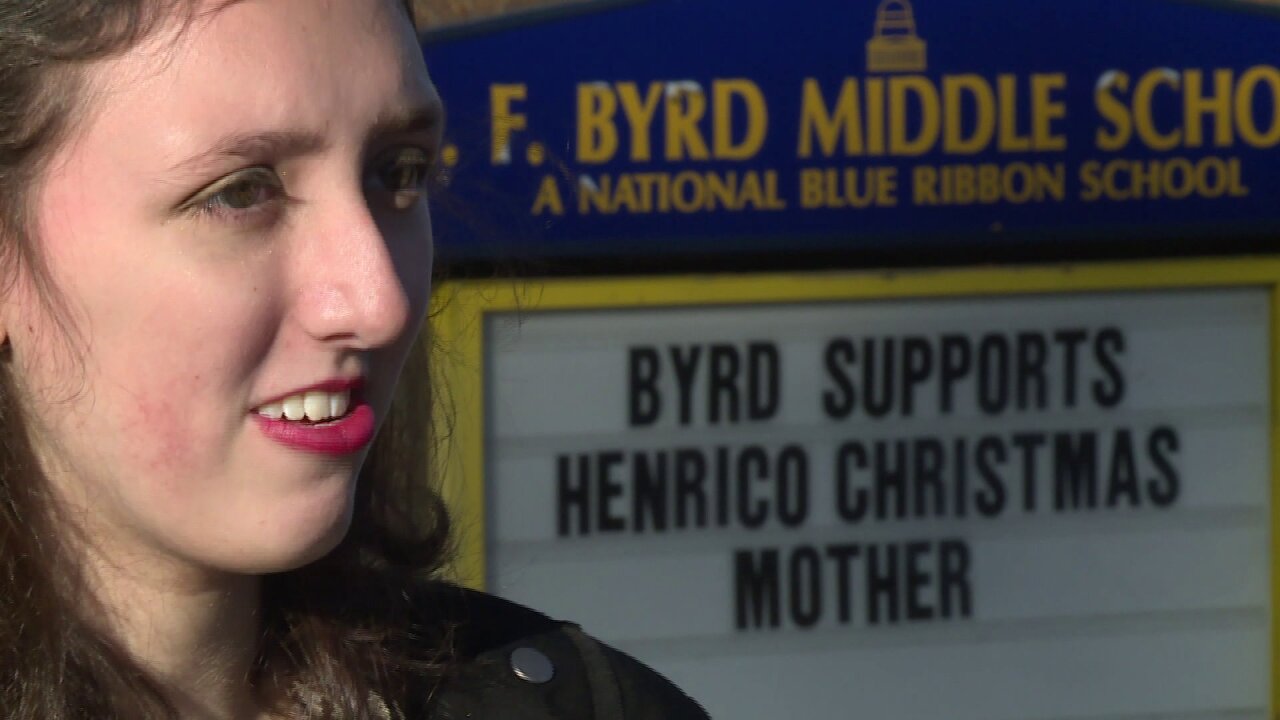 HENRICO COUNTY, Va. – A high school student working to change the name of a middle school will go before the Henrico School Board on Thursday.

Sixth, seventh and eighth-grade students have been learning art, math, science and history at Harry F. Byrd Middle School in Henrico's West End for decades. But it is the history behind the school's namesake that could lead to big changes.

Harry Flood Byrd served as Governor of Virginia from 1926 to 1930 and later, from 1933 to 1965, as Virginia's U.S. Senator. In fact, the school's nickname is the Senators. Now a movement is afoot to remove Byrd's name from the school based on his actions while in office.

"The issue is simple – a public school should not be named for someone who vigorously fought to keep public schools segregated," Hermitage High School student Jordan Chapman said. She explained that due to his actions, African American students were kept out of school for a five-year period.

Students, parents and community members came to the Henrico school board meeting Thursday night to discuss the future of Harry F. Byrd's name.

Many spoke out Thursday, including a young girl who goes to the school. She said it's time for something new.

Alburger stood with several adults to address the school board. She said this cause is important to her. “It means a lot to me because half of my friends are minorities."

Alburger and dozens of parents urged for a change, but not everyone was on board.

"Doesn’t a name for Harry F. Byrd have a low priority as compared to our many other problems?" said one speaker.

The board decided they will continue to discuss the possibility of a possible name change, when the board reconvenes in January. School Board members asked Superintendent Patrick C. Kinlaw to prepare a report detailing everything a name change would entail.

In 1954, the political organization of U.S. senator Harry F. Byrd, Sr., controlled Virginia politics. Senator Byrd promoted the "Southern Manifesto" opposing integrated schools, which was signed in 1956 by more than one hundred southern congressmen. On February 25, 1956, he called for what became known as Massive Resistance. This was a group of laws, passed in 1956, intended to prevent integration of the schools. A Pupil Placement Board was created with the power to assign specific students to particular schools. Tuition grants were to be provided to students who opposed integrated schools. The linchpin of Massive Resistance was a law that cut off state funds and closed any public school that attempted to integrate.

"It is not our goal to change history; we simply do not find it appropriate that a school in 2015 be named after an individual that sought to stand between students and education," Chapman, who has collected hundreds of signatures from supporters of a name change, said.

Chapman helped start a group lobbying the Henrico School Board to change the school's name. Over the past few months, she joined forces for some parents of Byrd students who shared her beliefs.

"His position on segregation makes it [the school's name] inappropriate in this day in age," parent Anne-Marie Leake said. "It's about his stance on public education. This is someone who -- as a U.S. Senator used that position of power to defy the Supreme Court and what had become law."

Leake admitted if you look deep enough into anyone's history, you're bound to find something that offends someone.

"To those who might call it an attempt to sweep history under the rug, our response is that we are doing the opposite," Leake said. "We are asking the community to take an honest, unflinching look at one very negative aspect of our history, to learn from it, and to effect positive change for the future."

Leake said the response to their movement has been mostly positive, but added getting the school's name changed could be difficult. She said Henrico school leaders told her the school board does not have a precedent for these situations.

"We encourage anyone with thoughts on the subject to let us know, so that the Board can receive as many perspectives as possible. This can include sending an email to schoolboard@henrico.k12.va.us or attending the Public Forum at our monthly School Board meeting on December 10," Henrico School Board Member Tuckahoe District Lisa Marshall said. "As for Jordan, the Board has been impressed by her thoughtfulness and diligence, as well as the professional manner in which she’s brought this matter to the public’s attention. We look forward to hearing from her again at a future School Board meeting."

Chapman said she was not sure who she would like to see the school renamed after. Former Henrico superintendent Bill Bosher and civil rights attorney Oliver Hill came to mind, she said. She also mentioned the school could go the route of honoring a geographic location instead of a specific person.